100 Years of De Stijl, from Mondriaan to Dutch Design • Surf4Hub News and Blogs

Across the country fantastic exhibitions are on show, demonstrating the strength of De Stijl and it’s influence on design still after 100 years.

The primary colours and simplicity of line are what we know De Stijl for, and most popularly Mondriaan.

Here are a few places to spot Mondriaan this year: 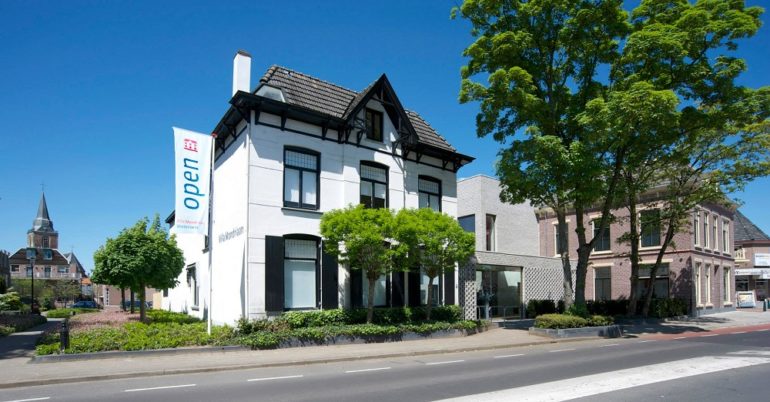 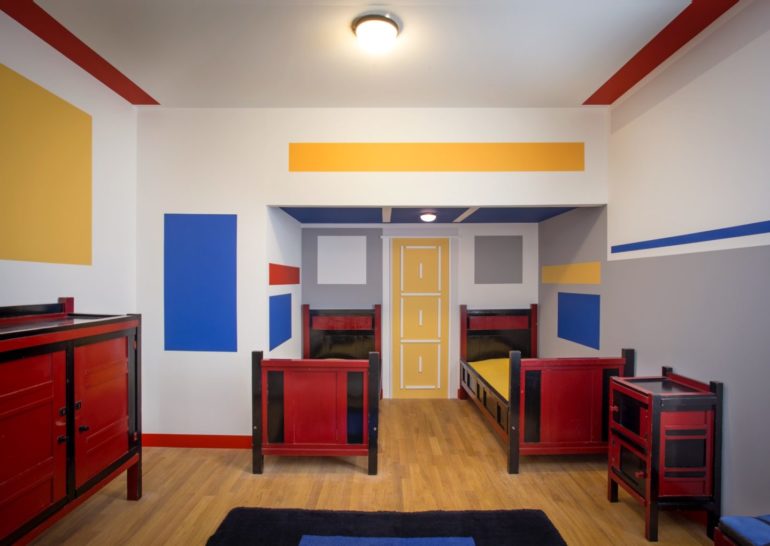 Tension between realism and abstraction in De Stijl exhibition Winterswijk

Villa Mondriaan is exhibiting the surprisingly figurative works by the members of art movement De Stijl. Central to the exhibition, named Figuration in Style, are the works by De Stijl pioneers such as Piet Mondrian, Theo van Doesburg, Bart van der Leck and Vilmos Huszár. The exhibition is part of the centenary of De Stijl and celebrates this lesser known aspect of their repertoire.

As well as their famous abstract works, the artists of De Stijl also made figurative and realistic paintings and drawings throughout their careers. While not as well-known, their figurative work is definitely as exciting as their abstract. Especially as the artists themselves were in conflict about it.

Discordance and unity in De Stijl collective
Despite the relationship between some of the De Stijl artists and figuration, there was a lot of disagreement in the group on this topic. In a 1918 issue of his magazine De Stijl, founder Van Doesburg attacks an artwork by Peter Alma for containing too many figurative elements. Partly in response to this, Van der Leck breaks with the collective the same year. After this point, Van der Leck takes inspiration from themes of everyday life, like trees, flowers and animals. The tension between abstraction and figuration both unites and divides De Stijl, but also stimulates them in their search for the ideal form of art.

Special artworks from private collections and museums
De Stijl, formed in 1917, is one of the most important Dutch art collectives that is known for their abstract works with primary colours and straight lines. Surprisingly, a lot of the artworks would be instantly recognisable to many. Multiple members of De Stijl, including Mondrian, started their careers painting realistic landscapes, experimenting and playing with abstraction step-by-step until their work became completely abstract. Mondrian, however, kept on making realistic studies of flowers during his period in De Stijl. This exhibition, Figuration in Style, includes some never before seen work from private collections, as well as paintings from the collections of the Gemeentemuseum The Hague, Centraal Museum Utrecht and Boijmans van Beuningen Rotterdam. 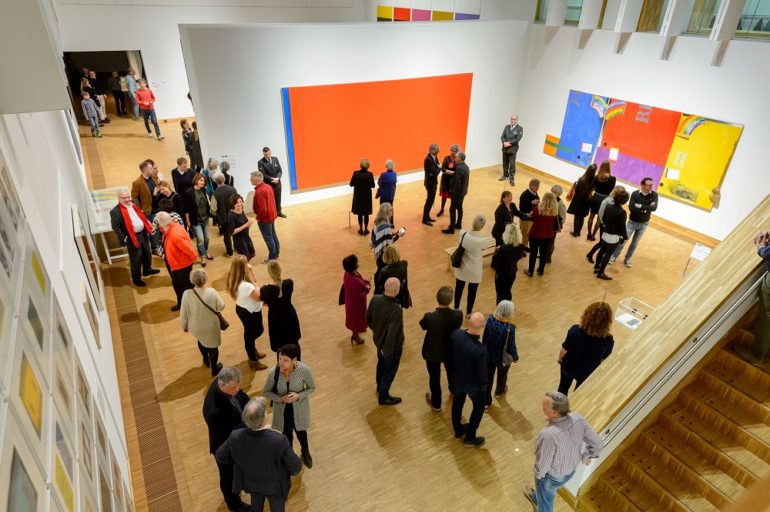 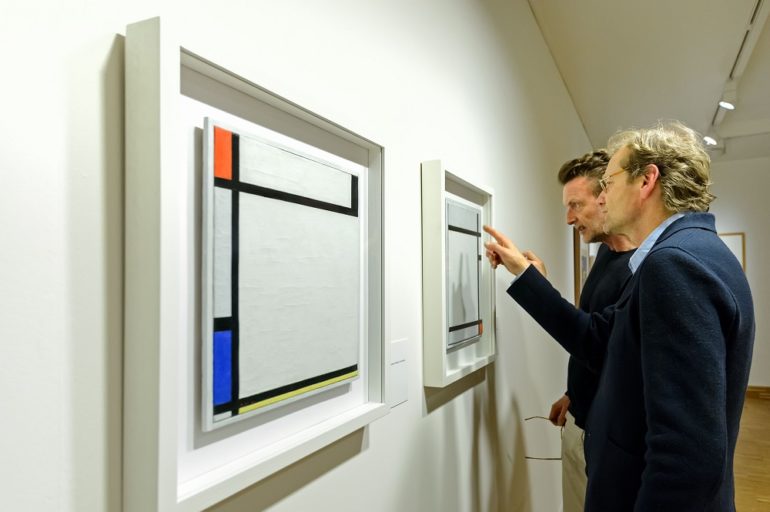 The Colours of De Stijl

Red, yellow and blue – the three primary colours have become synonymous with the art movement known as De Stijl. But that single iconic colour combination has tended to mask the reality of the diversity of ideas advanced by its various members. At the end of the day, Piet Mondrian, Theo van Doesburg, Bart van der Leck, Gerrit Rietveld, Georges Vantongerloo and Vilmos Huszár all formulated their own individual views on colour.

In this exhibition, Kunsthal KAdE zooms in on the use of colour by the six main exponents of De Stijl and goes on to examine how artists have continued to investigate the autonomous power of colour in the post-World War II period: from the abstract expressionism and concrete art of the 1960s and ’70s through to the work of artists who are today still exploring colour as an independent element. The Stedelijk Museum Amsterdam is lending top works like Barnett Newman’s ‘Who’s Afraid of Red, Yellow and Blue III’ and Jasper Johns’ triptych ‘Untitled’. The Van Abbemuseum is sending the architectural model of Theo van Doesburg’s proposed colour scheme for the auditorium of Strasbourg’s café/cinema ‘Aubette’, as well as works by Piero Manzoni, Richard Serra and Joseph Kosuth. And the studio of Olafur Eliasson is contributing the light installation ‘Ephemeral afterimage star’ (2008).

The starting point for the exhibition will be a series of small spaces setting out the varying positions of the De Stijl artists. Mondrian’s palette evolved over time from naturalistic to Luminist and on through brown/grey, pastel shades and primary colours to his final more richly variegated shades of red, yellow and blue. Van Doesburg and Huszár advocated the theories of chemist Wilhelm Ostwald, who thought the mixture of white and black with ‘full colours’ was important (ideas published, for example, in De Stijl in 1920). Van der Leck saw colour primarily as a means of making his figure pieces ‘more essential’. Vantongerloo developed a colour theory of his own, using pseudo-mathematical formulae to link colours to music and arriving at a system of seven colours. For Rietveld, finally, colour played a subservient and supporting role; he attached particular importance to the perceptions of the individual and the eye-catching power of primary colours.

In addition to major examples of the work of the selected artists, the exhibition will include documents concerning their colour concepts: not only drawings and letters, but books and other texts, and examples of colour theories on which their thinking was or is based. The colour theories of Wilhelm Ostwald will be examined in this context. 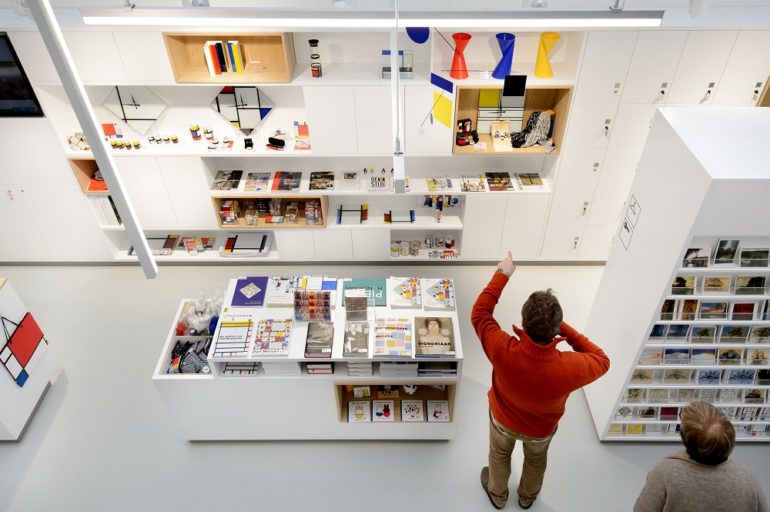 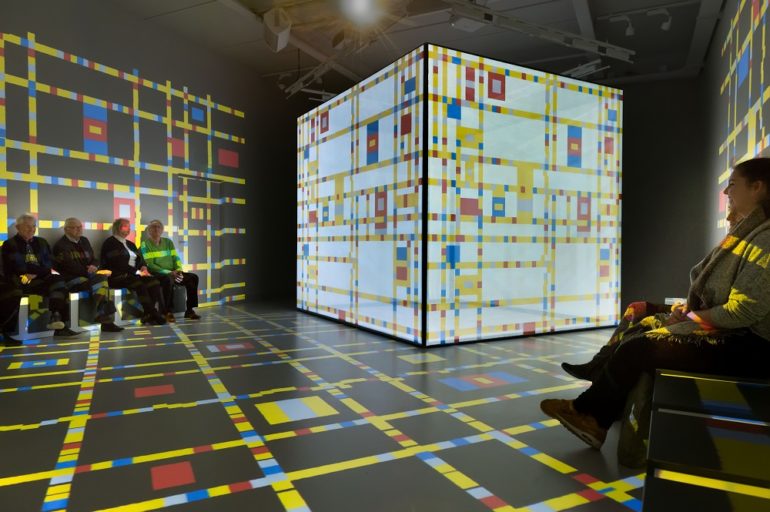 From 7 March onward, a visit of the Mondriaanhuis in Amersfoort will be a museum-like experience for young and old and a surprising introduction to Mondrian, who was born in Amersfoort on 7 March 1872. In his birth house, visitors will travel through the life of the idiosyncratic pioneer of abstract art, from Amersfoort to Winterswijk and from Amsterdam via Paris and London eventually to New York. In the museum-like environment, visitors will discover his iconic work, his spiritual formation, his interests and friends. In the new setup, the Mondriaanhuis will use various audio-visual techniques, submerging visitors in the artistic search of the artist. The exhibition ends in the Do-It-Yourself studio, the workplace where everyone who has become inspired by Mondrian can create their own work of art.

Still looking for a bit more of De Stijl?

New Dutch brand ON Socks has launched their first series of socks – inspired by ‘100 Years The Style: from Mondriaan to Dutch Design’! ON sell their socks in sets of 5, each one odd, but coordinating. You’ll spot tourists and locals wearing them, but will you find anyone in a matching pair?!