Easter Traditions from Around the World • Surf4Hub News and Blogs

This year Easter weekend begins with Good Friday on the 30th of March and Easter Sunday falling on the 1st of April, which means it’s time to start shopping for Easter eggs and joining in with Easter Egg hunts across the country. However, not everyone celebrates Easter the same way we do in the UK, many countries around the world have interesting and unusual ways of celebrating Easter. Here are some of them.

Who would have thought that a country would have the tradition of reading crime novels at Easter? Well that’s exactly what happens in Norway. This tradition is called Påskekrim, or ‘Easter Thrillers’, which are published in abundance  around Easter time for everyone to sit down and enjoy. However, this crime tradition is not just limited to books, all the TV and radio channels also produce crime programs for Easter. Even the milk companies join in, printing crime stories on the back of their cartons.

In Australia they have a slightly different approach to the Easter Bunny, replacing it with the Easter Bilby. This is because, unlike in the rest of the world where we are fond of these cuddly creatures, in Australia they are pests who have destroyed crops and caused native species to become extinct. So, in 1991 the Foundation for Rabbit Free Australia campaigned for the Easter Bilby to replace the Easter Bunny. Bilbies are a species native to Australia, but their numbers are dwindling, by making them a symbol of Easter they aim to raise awareness and money for their conservation.

This tradition is from the town of Bessières, in the southwest of France. Every year on Easter Monday they cook a giant omelette made with 15,000 eggs to feed around 10,000 people who come to watch the endeavour and try some. The tradition started in 1973, although it is said to go back to Napoleonic times, when Napoleon and his soldiers were said to have stayed overnight and had an omelette, which he liked so much he asked the villagers to make a giant one for all his soldiers. 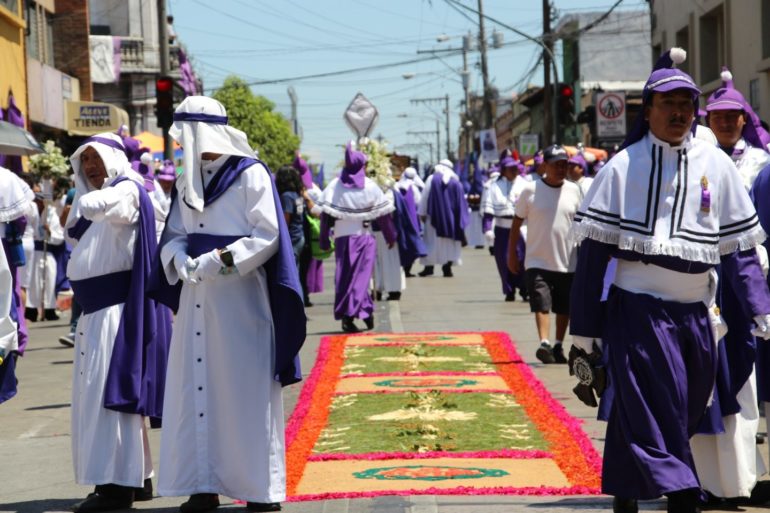 Although Guatemala has lots of traditions at Easter, “alfombras de aserrín” is one of the most beautiful. Locals use dyed sawdust and flowers to make colourful carpets along the streets. This is done for women and men wearing traditional dress and carrying statues of Jesus and Mary to walk over, as a sign of the locals faith and devotion to Jesus.

The Polish tradition of  ‘Wet Monday’ falls on Easter Monday and is a day of water fights. Traditionally, it is a day were boys get to throw water over girls but the girls have to wait until the following day to get their own back. Although today it has become a fight in which water is thrown at anyone nearby using water balloons, pistols or other similar ammunition.  No one knows the exact origin of the tradition, although it is thought to celebrate the beginning of spring and fertility.

In Spain Easter is known as Semana Santa, or Holy Week which begins a week before Easter Sunday, this year on March 25th. One of the biggest parts of Holy Week is the precessions that take place, these date back to the middle ages and ‘brotherhoods’ march from their church to their local city cathedral. These brotherhoods dress in the traditional outfits called Capirote, these are conical hats that cover their faces. Women also wear a mantilla, which is a black veil.

Bermuda’s tradition is not one you would usually associate with Easter, on good Friday everyone goes out to watch children fly their homemade kites. These kites are often huge and brightly coloured, meaning the sky is painted all the colours of the rainbow. At the end of the day they give out prizes for kites in different categories.  Whilst it may seem a little different, the tradition is supposed to symbolise Christ rising from the grave and going to heaven.

Whereas many may associate dressing up as witches with Halloween, in Sweden it is an Easter tradition. Children dress up as witches on Maundy Thursday, going door to door and asking for Easter treats. This unusual tradition comes from the old folk tale that on the Thursday before Easter the witches flew to a mountain in Germany to dance with the devil, when these witches were flying back the Swedish people would light fires to keep them away.

Easter Arts and Crafts to Inspire You