Home at Last: After 14 Years the Stolen Van Goghs are Back in the Museum • Surf4Hub News and Blogs 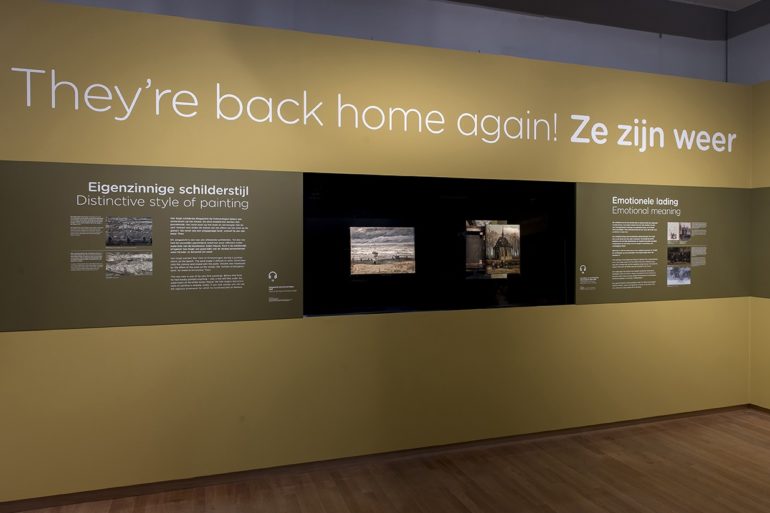 After an absence of 14 years, the two paintings by Van Gogh that were feared lost are again on display in the Van Gogh Museum. The works were stolen from the collection in 2002 by thieves who needed only a few minutes for the entire operation. The theft was a major blow to the art world. Last September a team from the Italian Guardia di Finanza stumbled upon the two paintings during a house search in the vicinity of Naples. Thanks to the concerted efforts of the Italian and Dutch authorities, the works could be released relatively soon and begin their journey back to the Netherlands. Starting today, they have resumed their place in the museum’s collection and are on display in the state in which they were found, without their frames.

‘The homecoming of the recovered paintings means that our collection is once again complete, and we can close the door on this particularly painful period in our history. I’ve been looking forward tremendously to the day when we could again show these two gems to our public. That day has finally come. We haven’t been able to tell their story for more than 14 years, but starting today, they again have a face and a voice! They’re home at last! Unbelievable!’ director Axel Rüger said. 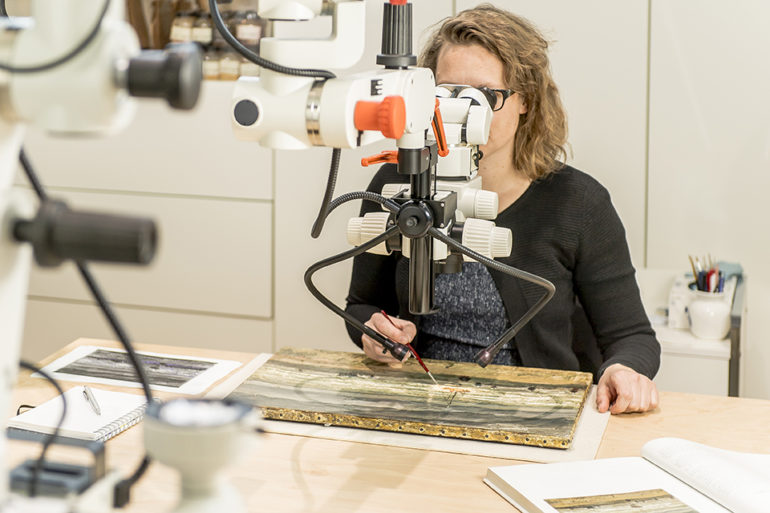 Initial examination has shown that the works have suffered relatively little damage. Apart from a small area of visible damage to the canvas View of the Sea at Scheveningen, the Van Goghs are in reasonably good condition. Presumably they were not tossed around very much during their years ‘in hiding’. In fact, they seem to have been left in peace behind the double wall where they were found, in the house occupied by the parents of Camorra chief Raffaele Imperiale.

Today the returned paintings will receive a festive welcome from the outgoing Minister of Culture, Jet Bussemaker, and museum director Axel Rüger. The works will be on display up to and including 14 May 2017, after which they will go to the restoration studio for examination and treatment.

Last year members of a specialist team of the Italian Guardia di Finanza stumbled upon the two stolen works while searching one of the houses belonging to the fugitive Neapolitan Raffaele Imperiale. This put an end, in September 2016, to many years of uncertainty as to the condition and whereabouts of the paintings, which had been missing from the Van Gogh Museum since 2002.

Axel Rüger: ‘As director of the museum, I have first-hand experience of the effect that such a traumatic incident can have on the staff. In recent years I’ve been involved in the search for the works. It’s wonderful for me to get them back and to see them in our collection for the first time!’

Fourteen years of wondering about their condition and whereabouts 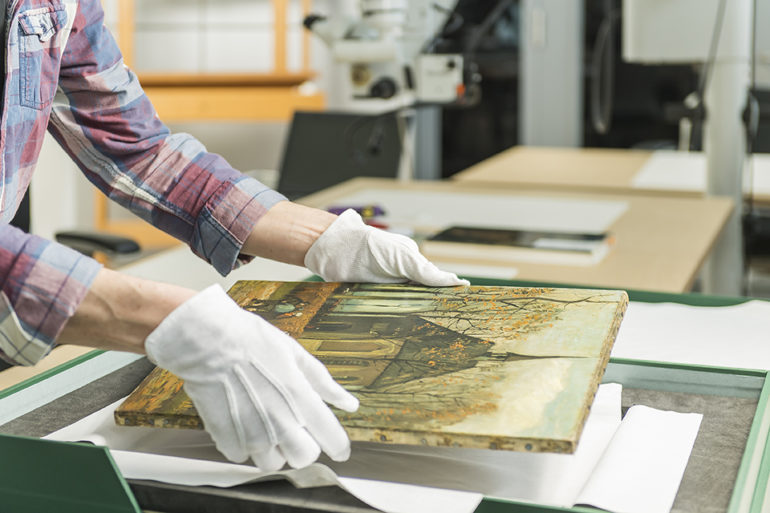 No one knows what first happened to the paintings when they disappeared from the museum, but there were great fears that they had suffered considerable damage. The recovered works appear to be in reasonably good condition, however. The relatively minor damage is all the more remarkable because both paintings were taken out of their frames after the theft.

The canvas Congregation Leaving the Reformed Church in Nuenen seems at first glance to be unharmed, apart from slight damage to the edges in a few places and some scratches in the layer of varnish. The work View of the Sea at Scheveningen suffered more damage: a piece of the paper support – and therefore a substantial part of the depiction – is missing in the lower left-hand corner. How this happened remains a matter of conjecture, but it seems as though something got caught on the back, causing a piece of the paper (and the painting on it) to be torn off. Small pieces of paint have chipped off in several places along the edge. In fact, this work had already had an eventful past, marked by intensive restorations and new ‘relinings’. During the latter interventions, the work on its original paper support was ironed onto a canvas, using a paste made of wax and resin, which was applied with a great deal of heat and pressure – a technique that is no longer used.

Filling in the gaps in the story

The two paintings from Van Gogh’s early period are small gems that have a lot of added value for the museum’s collection. Their return therefore fills glaring gaps in the presentation. 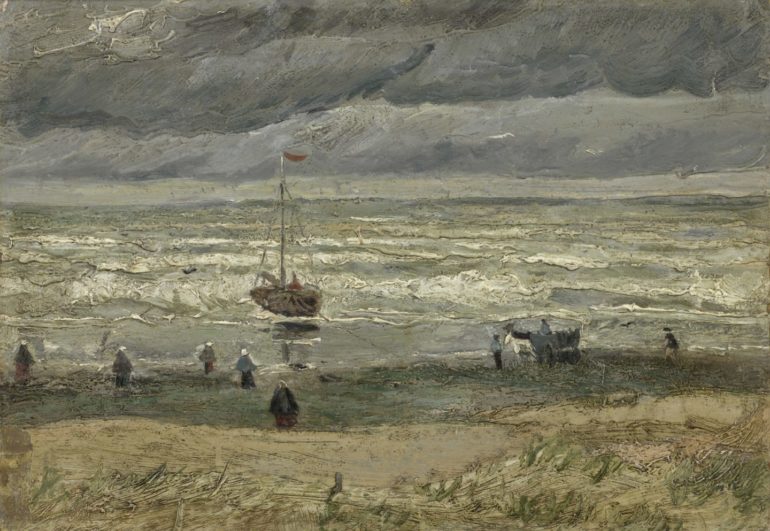 View of the Sea at Scheveningen (1882), originally painted on paper, is one of the first works Van Gogh made without the supervision of his teacher, Anton Mauve. In the preceding years he had devoted himself almost exclusively to drawing and had done little painting. Given his still-scant experience, the canvas is strikingly forceful. Even though the brushwork is fairly coarse and the simple, drawn figures distributed rather haphazardly over the beach, the space and the approaching storm are aptly characterized. 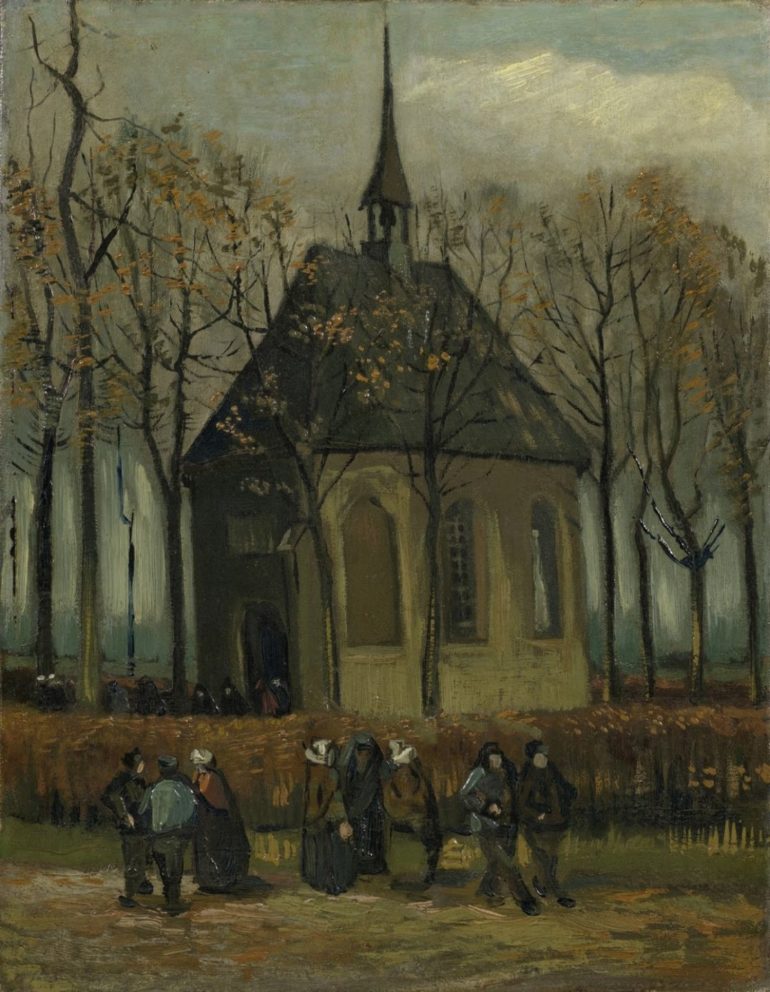 Van Gogh painted the Congregation Leaving the Reformed Church in Nuenen in 1884, when he was living with his parents in Nuenen in the province of Brabant. The canvas was intended for his mother, who had broken her leg early that year. The choice of subject, the church of the Reverend van Gogh, suggests that Vincent hoped his father would take pleasure in the work as well. X-radiographs show that Van Gogh touched up the foreground and other passages too, probably a year later, in 1885. He painted figures in front of the church door and applied autumnal colours to the bare winter trees and hedges. Only the church, the sky and some of the trees remained unchanged. In the foreground Van Gogh painted women wearing long mourning shawls, perhaps a reference to his own grieving process and thus to the death of his father, who died on 26 March 1885. In addition to its art-historical importance, therefore, this work is clearly of biographical value as well. 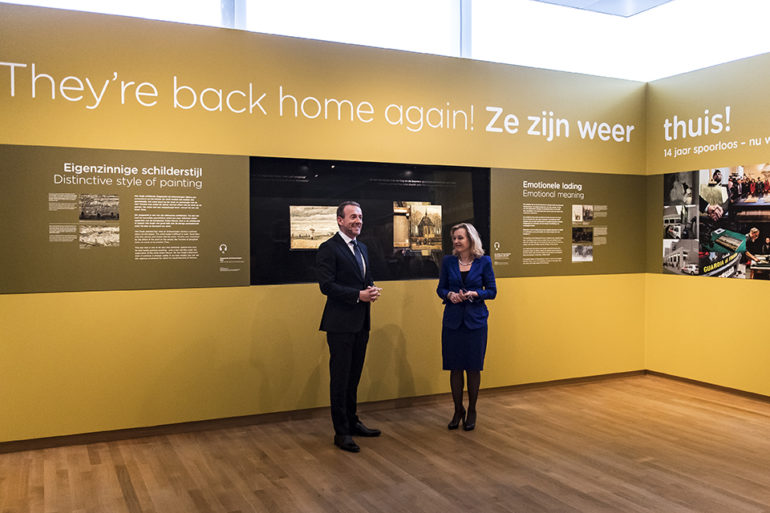 The two recovered Van Goghs will be on display up to and including 14 May 2017, after which they will be sent for thorough examination to the restoration studio, where the damage will be repaired and the works restored and framed.

The return of the paintings to the Netherlands, the festive reception, the research and restoration are made possible by the generous support of the Ministry of Education, Culture and Science, the BankGiro Lottery, Van Lanschot Bankiers, Heineken, Kikkoman Foods Europe B.V. and Bulgari. Hizkia Van Kralingen and Hilton Hotel Amsterdam facilitated the transport and presentation of the recovered works.

Best Art Galleries and Museums to Visit this Summer

POW! WOW! Returns to the Streets of Rotterdam in September 2020