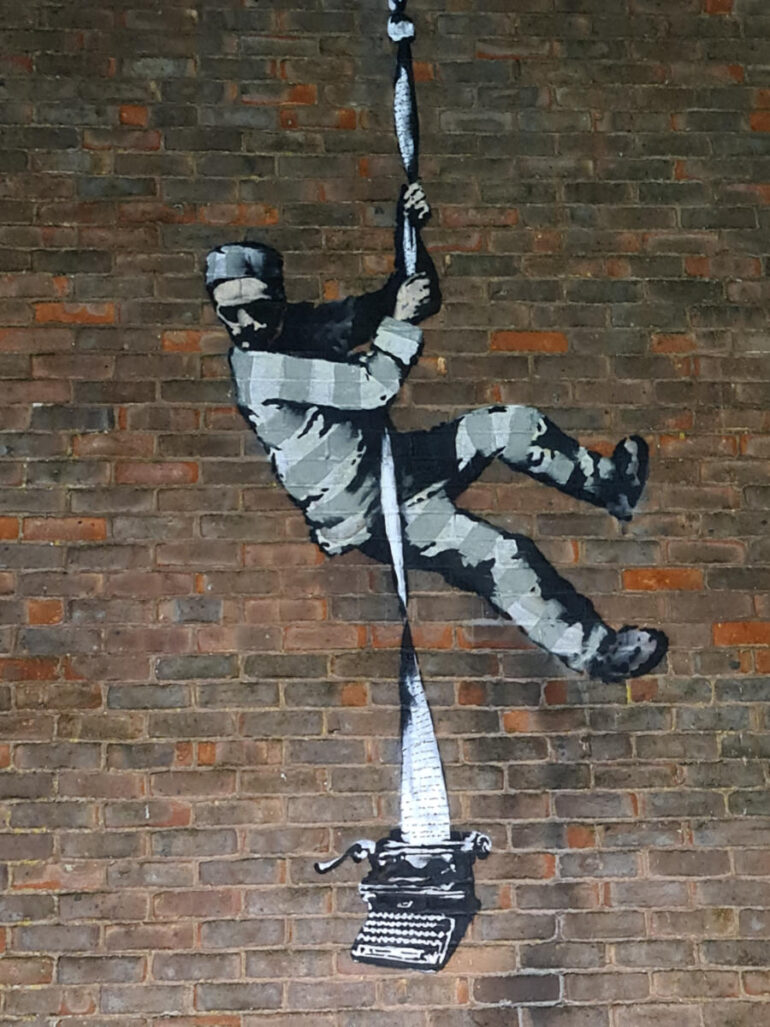 Street artist Banksy has revealed that a work on the outside wall of Reading Prison was created by him earlier this month.

The British artist has depicted an inmate dressed in a stereotypical stripey black and white outfit lowering himself down the wall using a long sheet of paper, weighed down by a typewriter.

Banksy confirmed that he had created the piece in a video posted on his official website and also on Instagram.  The video shows the work being spray-painted onto the prison wall and is accompanied by a voiceover taken from an episode of the popular television show ‘The Joy of Painting,’ hosted by the American artist Bob Ross.

It’s thought that the typewriter in the piece could be a reference to poet and author Oscar Wilde, who was imprisoned behind Reading Prison’s wall between 1895 and 1897 after a conviction for gross indecency for a homosexual relationship, which was illegal in Victorian Britain. Wilde’s famous poem ‘The Ballad Of Reading Gaol’ was written after his release during his time in exile.

Reading Prison was closed in 2013 and the Grade II listed building is now used as a film set for TV programmes such as ‘Killing Eve’.  It was also a venue for a major art exhibition in 2016 organised by the art commissioning organisation Artangel.  The exhibition, titled Artists and Writers in Reading Prison featured works from leading artists including Marlene Dumas, Nan Goldin, Steve McQueen and Ai Weiwei, with pieces inspired by the jail’s most infamous inmate.

A letter written by Oscar Wilde to his partner Alfred ‘Bosie’ Douglas whilst in prison was read at the exhibition by singer Patti Smith and actor Ben Whishaw.

A spokesperson for the Reading Borough Council spoke of his delight at the jail becoming the site of Banksy’s latest work: “The council is pushing the Ministry of Justice, who own the site, to make suitable arrangements to protect the image.

“We are thrilled that Banksy appears to have thrown his support behind the council’s desire to transform the vacant Reading Gaol into a beacon of arts, heritage and culture with this piece of artwork he has aptly called Create Escape.”