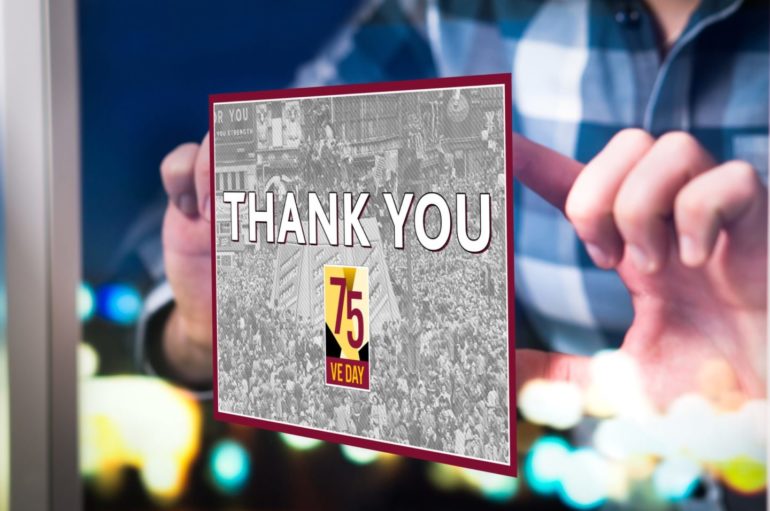 The Queen is making her second televised broadcast since the outbreak of the coronavirus pandemic, to commemorate the 75th anniversary of VE Day. The monarch’s address will be broadcast at 9pm on the BBC and forms part of a series of events taking place on May 8th marking the end of World War Two on the continent.

The government has moved the traditional Monday Mayday bank holiday to Friday May 8th, to allow for VE Day events to take place. However due to the pandemic, the original plans for the commemorations have been cancelled and a new programme of events has been scheduled.

The new programme was announced by Culture Secretary Oliver Dowden who has expressed his confidence that the UK will “come together to mark this historic occasion” and that celebrations will now take place “in our homes and on our doorsteps”.

Brits in lockdown have been asked to show their support by placing a specially designed image of a Second World War soldier in their windows. Purchase of the ‘Tommy in the Window’ from Royal British Legion Industries will assist with helping veterans into employment.

Families can get involved by downloading a pack with ideas to help kids create homemade VE Day bunting, WWII recipes, games, and educational activities. The pack has been produced by the Department for Digital, Culture, Media and Sport.

The BBC will broadcast special programmes to mark the milestone occasion, with The Queen’s speech airing at 9pm – the precise moment her father, King George VI, gave his radio address 75 years ago.

The BBC’s evening of programmes will include Welsh soprano star Katherine Jenkins, actor Adrian Lester and singer Beverley Knight, all of whom will be performing well-known songs from the 1930s and 1940s.  The evening will end with the nation being asked to join in with a rendition of force’s sweetheart Dame Vera Lynn’s ‘We’ll Meet Again’.

Tony Hall, BBC director general, said: “At a time when many are looking for unity and hope, the BBC will bring households together to remember the past, pay tribute to the Second World War generation and honour our heroes both then and now.”

Cruse asks Nation to ‘Wrap Our Arms’ around the UK

Lockdown Home Improvement Ideas to Make the Most of your Property