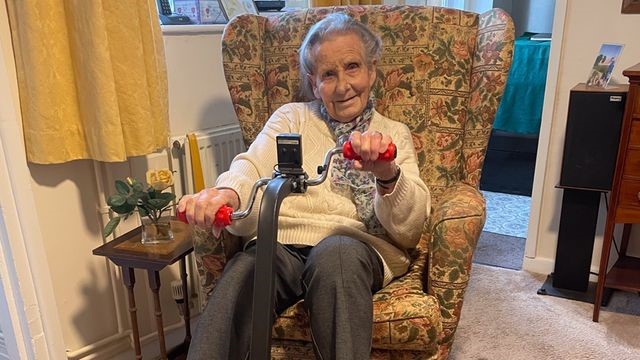 Diana O’Flynn is raising money for West London Mission, a charity that helps people affected by homelessness, trauma and poverty. Diana, who previously worked as a teacher in prisons chose to support WLM as her grandmother, Katherine Price Hughes, founded the charity’s service which specialises in helping jail leavers integrate back into the community.

To date, Diana has already covered 250 miles and raised over £3,500 for her chosen charity.  She is completing her cycling challenge by pedalling on the spot in her sitting room for up to half an hour a day for 80 days.  Her mammoth cycle is due to come to an end on 30 June, by which time she aims to have raised £5000 for West London Mission.

“West London Mission keep sending messages to my manager – who is my granddaughter – to say how pleased they are.”

Diana’s grandmother and the West London Mission established the Katherine Price Hughes House in 1917, designed to help young women and sex workers. As more state help was offered to sex workers, that charity changed its focus towards helping ex-prisoners instead.

One resident of the Katherine Price Hughes House told Diana that the charity has changed his life by helping him to secure living accommodation, showing him how to apply for jobs, and also teaching him essential life skills such as how to cook a balanced and nutritious meal.

At West London Mission Katherine Price Hughes House, the staff and residents engage in purposeful activities to enhance daily living skills and to help re-settle offenders back into society.

To find out more and donate to Diana’s fundraiser, visit her GoFundMe page aptly named ‘Around The Sitting Room in 80 Days’ and follow her progress on her Instagram page – @aroundthesittingroomin80days.