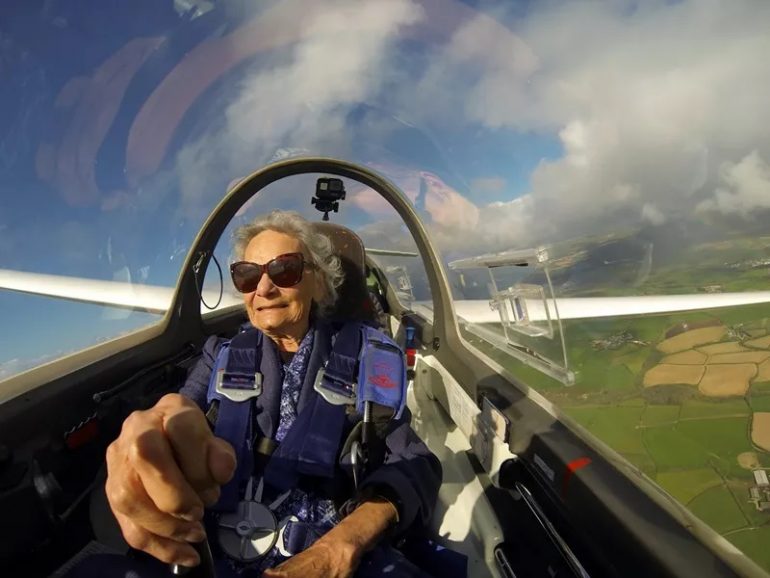 A World War Two Royal Air Force veteran has taken off in a glider to raise money for a force’s charity.

Kate Orchard, who is just shy of her 100th birthday, took to the skies from the Seahawk Gliding Club, RNAS Culdrose, near Helston.

Mrs Orchard was cheered on from the ground by her family, in her bid to raise money for Help for Heroes by doing the flight.

The former RAF warrant officer said to able to do this at her age made her feel she had achieved something, saying she just wanted “to fly away”.

“I believe passionately that it’s very important that all ex-military personnel are looked after. Especially those unfortunate enough to have physical or psychological injuries,” she said.

Help for Heroes area fundraising manager, John Carpenter, added: “Kate is a truly amazing lady, full of spirit – but I suppose we should expect nothing less of the generation that served us so well during our darkest days.

“We can only thank her from the bottom of our hearts.”

During the war, Mrs Orchard served as a plotter, whose job was to record all sightings of enemy aircraft to allow friendly forces to be directed against them.

Before the flight, Mrs Orchard was helped into the glider, proudly wearing her war medals.

Born in 1922, to a large Anglo-Indian family with 13 brothers and sisters, Mrs Orchard’s father worked as a chief telegraph inspector on the Indian railways. In 1941 India created the Women’s Auxiliary Corps, recruiting women to help with the war effort and the 20-year-old Mrs Orchard volunteered, along with two of her sisters.

By 1942, she was working in the Air Defence Centre, Number 5 Filter Room in Madras, alongside both the RAF and the Indian Air Force, as a plotter on long 24-hour watches, plotting aircraft targets and sending signals to the air warning systems. At this time, Mrs Orchard met her husband, Bill, who was serving in India with the Royal Artillery and was later sent to Burma.

For more information on Help for Heroes, visit the charity’s website.

Mum Beats the Odds to Climb Mountain for Children’s Charity