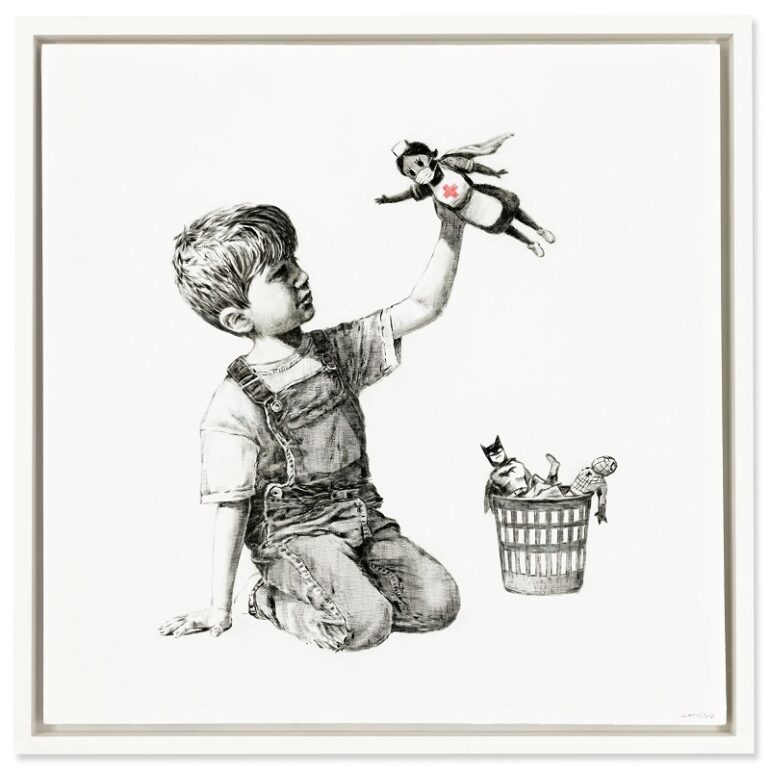 A painting by street artist Banksy depicting a boy abandoning traditional superheroes, such as Batman, in favour of a caped superhero nurse has raised £16.7m for UK health charities.

The painting, entitled ‘Game Changer’ was created by the anonymous artist as a thank-you to health workers amid the coronavirus pandemic. The canvas was delivered to Southampton General Hospital last May and was a complete surprise to the staff that work there.

The work arrived at the hospital with a note attached that read: “Thanks for all you’re doing. I hope this brightens the place up a bit, even if it’s only black and white.”

Since May, the painting has been displayed in a hospital corridor and has provided a much-needed daily morale boost to staff. However, the original canvas has now been replaced by a copy, to allow the sale at Christie’s auction house to take place.

The artwork was being sold with an estimate of between £2.5m and £3.5m, but the hammer finally came down at £14.4m after an internet and phone bidding auction at Christie’s London headquarters. After fees, the final figure reached £16.7m – a new record for a Banksy canvas.

Previously, the record for a Banksy sold at auction was £9.9m, for his large work named ‘Devolved Parliament’, depicting the House of Commons filled with chimpanzees as MPs.

David French, interim chief executive officer of University Hospital Southampton Trust, said: “This incredible gift will be invaluable in helping us to focus on promoting and protecting the welfare of our staff as they heal and recover from the last year.

“As a charitable gift, it ensures our staff have a say in how money is spent to benefit them, our patients and our community and is a fantastic way to thank and reward them for the sacrifices they’ve made.”

Auction house Christie’s said that Game Changer was an image of hope and represented a “personal tribute to those who continue to turn the tide of the pandemic”.

Christie’s has confirmed that proceeds from the sale— and a significant proportion of the buyer’s premium—would be used to support health organisations and charities across the UK that enhance the care and treatment provided by the NHS.

Major Contemporary Craft Exhibition: Made in the Middle

99-year-old WWII Veteran Takes to the Skies for Charity