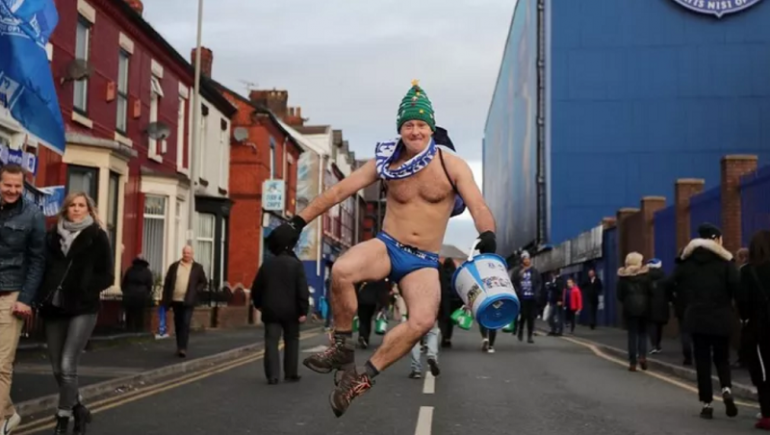 Charity fundraiser, Michael Cullen, who also goes by the name of ‘Speedo Mick’ has completed a 2,500 miles walk clad only in a pair of Speedo swimming trunks.

The Liverpudlian’s five-month ‘Giving Back Tour’ Go Fund Me page has raised almost £170,000 for charities to support disadvantaged young people and the homeless.

Mr Cullen said he was ready to “lie down for about three months” after his epic journey which has seen him walk across the UK and Ireland in all kinds of weather conditions –  including the recent Storm Barra.

He said: “All the encouragement and the support I have received along the way has been carrying me on because I think I would have gone home about three months ago, I was knackered after the first month of walking.”

Speedo Mick, who also attended Everton matches as part of his walk sporting just his swimming trunks and scarf added: “I was amazed that a lot of people, even in the Outer Hebrides, have heard about my exploits in my knickers.”

On his Speedo Mick Foundation website, which has so far raised a total of over £800,000 for charity, Mr Cullen is very open about his past struggles.

He admitted: “For a long time, I was in need of that very same help and support that I am now offering to others.

“I have been the homeless person you see in the shop doorway, the addict, the alcoholic, the hopeless case that had made so many bad decisions that there was surely no way back.”

Mr Cullen, who also swam the channel for charity in 2014, said of his latest fundraising adventure: “This is amazing for me because I’m always intrinsically linked to the lost soul I was over 19 years ago. That feeling is always there with me so I stay grateful for my life. I just love my life, I’m living my best life now.”

Mick said he would now be spending a quiet Christmas with his family, including his wife and grandchildren who he had been apart from while on his travels. He currently has no plans for further challenges in the future and hoped to focus on setting up projects with the Speedo Mick Foundation.