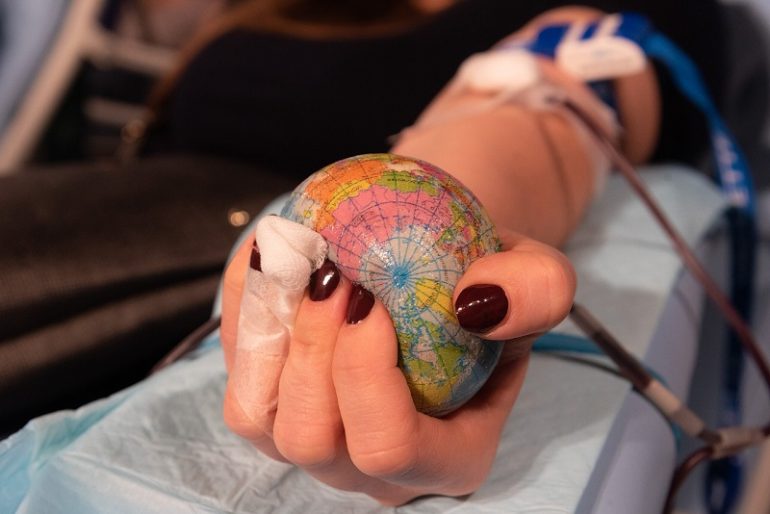 A British charity is attempting to set a world record for the most blood donations given in one day.

The #GlobalBloodHeroes record bid has been organised by Muslim social justice charity Who Is Hussain? in partnership with NHS Blood and Transplant. Donors from 350 health centres in twenty-three countries joined forces to give blood on Saturday.

Who Is Hussain? trustee Mohamedali Gokal said that giving blood is “one of the easiest and best things one can do.”

Gokal added: “So many people, myself included, have a slight fear of needles, which is really normal, but it is just a tiny prick and then doesn’t hurt at all after that.

“There are trained phlebotomists and clinical nurses around the whole time, and you just sit for a few minutes and then it’s done.

“Just by doing that, just giving up a few minutes, you could save three lives. It’s incredible.”

Who Is Hussain? is a registered charity in England and Wales and was founded in 2012. The charity now has teams in sixty cities across the world.

According to the charity, one in four of the people giving blood in England as part of Saturday’s campaign was a first-time blood donor.

Carl Etherington, from Castleford, West Yorkshire, gave blood during Saturday’s campaign and said: “I watched the (charity’s) video last night, and even though I might be of a different background (to the recipient), ultimately, blood is blood.

“The more you donate, the more lives will be saved. No matter what your background, you must try to contribute to society.”

The current world record is 35,000 units of blood donated in a single day, set in India in 2020. A single blood donation gives one unit, or one pint, which is a 10th of the body’s total and is quickly replaced.

Who Is Hussain? hopes its world record bid will raise awareness among ethnic minority communities where blood donation rates are low.

In the next few days, blood donor organisations around the world will confirm how many #GlobalBloodHeroes donors took part in their respective countries.

The final total will then be confirmed by the leading verification body, Official World Records. To find out more about the charity and register to donate blood, visit their website.

Furloughed Workers: Which Areas have been Most Affected?