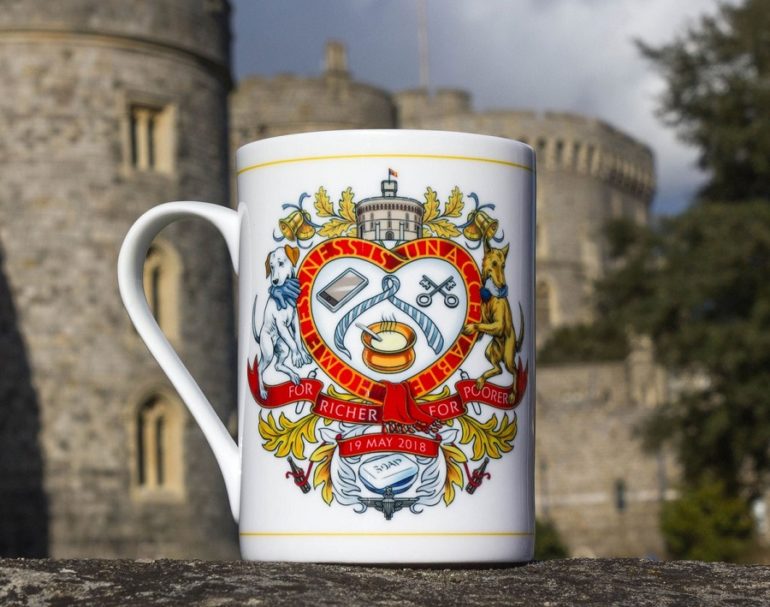 For Richer, For Poorer range from the Windsor Homeless Project

Following the birth of Prince Louis of Cambridge, royal-watchers’ attention now turns to the wedding of Prince Harry to Meghan Markle at Windsor Castle on Saturday 19 May. The couple have been keen to make the day a celebration for all, and now a charity aims to help the homeless with commemorative merchandise.

The Windsor Homeless Project has produced a special range titled For Richer, For Poorer as a response to an ill-fated attempt by Windsor Council to clear the area of homeless people ahead of the big day.

The memorabilia is designed by illustrator Alex Machin and each item is emblazoned with a crest depicting the issues faced by rough sleepers and how they can be helped off the streets for good. All proceeds from the sale will go towards supporting the homeless.

Prices in the range start at £10 for a pack of four postcards, which will pay for a mobile phone and credit for homeless people to keep in touch with support workers. Meanwhile a £15 fridge magnet pays for a week of hot meals at the Windsor Homeless Project, and a £20 mug will pay for a toiletry kit.

At the top of the range a souvenir plate may seem a trifle steep at £5000, but it will keep a rough sleeper off the streets for a year.

Earlier this year the leader of the Royal Borough of Windsor and Maidenhead, Simon Dudley, said that Police should clear Windsor of rough sleepers for the wedding. Via Twitter, Dudley opined that the homeless were exploiting residents and six million tourists every year.

Murphy James, of the Windsor Homeless Project, said: “Prince Harry and Meghan are both passionately committed to supporting those in need, including the UK’s homeless.

“By celebrating their special day with a hard-hitting message, For Richer, For Poorer really highlights the challenges our homeless communities face on a daily basis.

“Together we can make a difference to their lives.”

For more information on the Windsor Homeless Project visit: http://www.windsorhomelessproject.org/