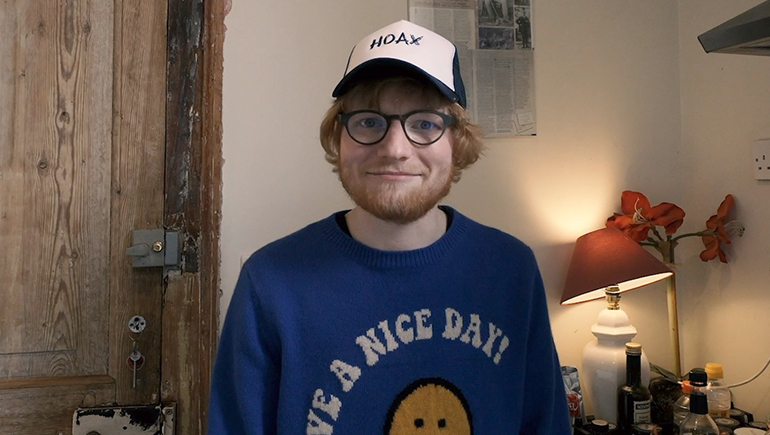 Grammy-award winner Ed Sheeran has donated his artwork as a raffle prize for a cancer charity.

The ‘Shape Of You’ singer-songwriter hopes that his abstract painting, entitled Splash Planet, will raise funds for the Cancer Campaign in Suffolk (CCiS).

Sheeran also created a video message for the charity, in which he describes his art as ‘one of the big splashy ones’ from the cover artwork of his hit single ‘Afterglow’. He is urging fans to take part in the raffle, saying: I hope you enter, it goes to a really fantastic cause and it’s going to help a lot of people, so thank you very much and lots of love.”

It’s not the first time that Sheeran has auctioned his artwork to raise funds for deserving causes—a previous painting, Dab 2, sold for £40,000 last year —raising funds to support teenagers and young people across East Anglia with life-limiting illnesses and disabilities.

Ed’s father John spoke of his son’s love of art: “Ed has been creating art since he was a child. This energetic, expressive painting is such a positive affirmation of life. It’s like a visual equivalent of one of his upbeat songs.”

In previous interviews, the chart-topper revealed how he painted his works of art: “I painted a canvas a day for 30 days. “It was really fun. It’s kind of Jackson Pollock-y.

“I bought house paint and just layered it up by flicking it. I just do my art and I love doing it. It’s something that makes me happy, that no-one else needs to judge,” he added.

Sheeran started work on his paintings at the end of his long-running Divide world tour, which culminated with a series of gigs in his hometown of Ipswich in 2019.

Karen Hare of CCiS, said: “We are a small local charity and are so excited and grateful to Ed for showing his support for our work in making this terrific gift to CCiS.

“Every pound raised helps hugely and will enable us to continue all our projects, give us some security and the opportunity to meet the future needs of those living with cancer.”

Proceeds raised from the raffle will help fund the charity’s counselling, complementary therapies and beauty and wellbeing projects.

Tickets costing £20 are on sale until March 12th 2021 via the charity’s website.