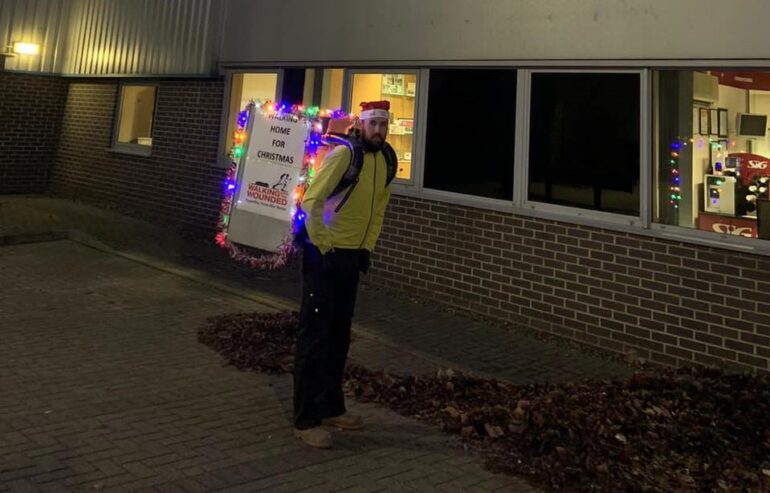 A former Army reservist has found a unique way to raise awareness of mental health issues for ex-military personnel.

Brian Medler, 38, has been walking his nine-mile commute across Norwich—with a 15kg fridge strapped to his back.

Mr Medlar, who is currently receiving treatment for depression decided to highlight the mental health issues of ex-servicepeople by raising funds for two charities that are close to his heart.  During his commute, with the tinsel and fairy-light strewn fridge, he is raising money for Walking With The Wounded.

After returning home from his job as a transport manager for a distribution company, Brian begins his second fundraising challenge and completes 100 squats—still carrying the fridge—in aid of charity Combat Stress.

He aims to complete 1,200 squats by Christmas Day, and since he has already done 850, he is planning to “smash that target and keep going”.

The two charities were chosen by Brian as he revealed his own mental health “spiralled out of control” in 2019, after 12 years’ service in the Reservists 2019. Shortly after this, his marriage broke down. Luckily, he was able to receive treatment on the NHS, but he is aware many other ex-service personnel relied on charities to help them with mental health challenges.

“Walking With The Wounded has the Walking Home for Christmas challenge, where people put on a Santa hat with the charity’s name and walk home – or walk to other places – but not everyone can see what they’re doing, or why,” he said. “So, adding a big fridge to the mix seemed logical.”

The Walking With The Wounded challenge is due to end on Christmas Eve— but Brian plans a Christmas day walk with his fridge as a grand finale: “On Christmas Day, after I’ve seen the kids, I’ll pick up the fridge and we’ll go for a little walk around Norwich’s outer ring road – it’s just over 13 miles.”

“I hope people will see me and wonder, ‘What’s that idiot doing?’ and maybe then donate some vital funds,” said Mr Medler, adding that he hoped to raise £1,000 for each charity.

Andy Sloan, from Walking With The Wounded, welcomed Brian’s efforts and said that every £75 raised can fund 121 mental health sessions.

“Christmas is normally a time of family and warmth and love, but COVID has created a new battlefield which particularly affects ex-military already in need of mental health care,” commented Sloan. “You don’t have to carry a fridge, but it does turn heads and raise awareness.”

How to Look After Your Fridge & Its Contents