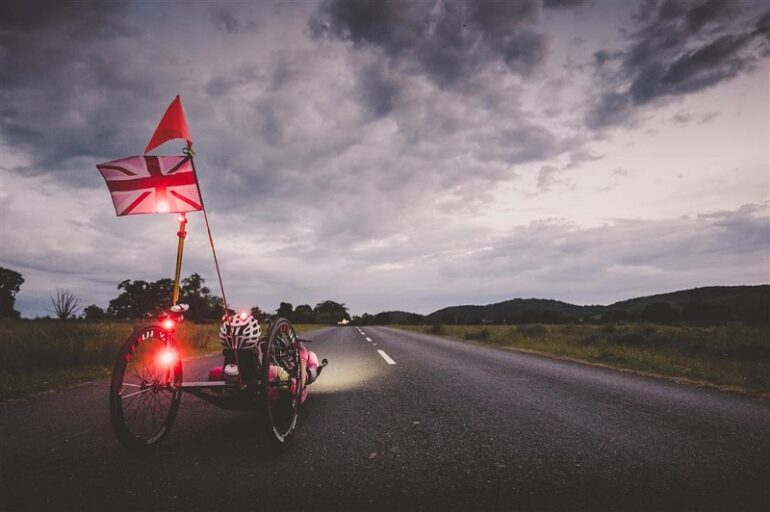 A Paralympian has completed a mammoth 4,800-mile journey around the coast of the UK by handcycle.

Mel Nicholls, who competed in the 100m and 200m wheelchair races at the London 2012 Paralympics just 15 months after taking up the sport, started her challenge in her hometown of Tewkesbury in Gloucestershire on 7 August.

The 75-day journey raised money for charitable causes and ended last week when Mel was welcomed home by a cheering crowd of supporters.

“It’s been amazing. The kindness of strangers and the support of everybody has been incredible,” she said.

It’s not the first handcycling challenge that Mel has undertaken – she also set a new world record in 2019 by handcycling from Land’s End to John O’Groats in just under seven days and wanted to set herself an even bigger challenge this year.

Mel’s clockwise journey around the UK started in Wales and she headed north around Scotland before travelling down the east and south coastlines, finishing back in Tewkesbury.

“It was so special to see that Tewkesbury sign. It got me quite emotional and to see the guys up the road and everyone coming and standing at the side cheering,” she said.

Mel,  who was left unable to walk and use much of the left side of her body after suffering multiple strokes, used a lightweight racing handbike for her journey.

She is currently awaiting  the official ratification but hopes that she has broken world records for the fastest time handcycling around Britain and the furthest distance ridden by handcycle.

She says that her body – and shoes – felt the effects of the challenge: “My shoes are being held together with Velcro and I feel my body is in a similar position,” she said.

“It’s not just the cycling; I had to plan my route, navigate, find somewhere for food and somewhere to stay so the brain is fully occupied each day.” concluded 44-year-old Mel.

By completing the challenge, Mel has raised £1,590 on her JustGiving page for the Ovarian Cancer Action charity, after she had an ovarian tumour removed at Cheltenham General Hospital last year.