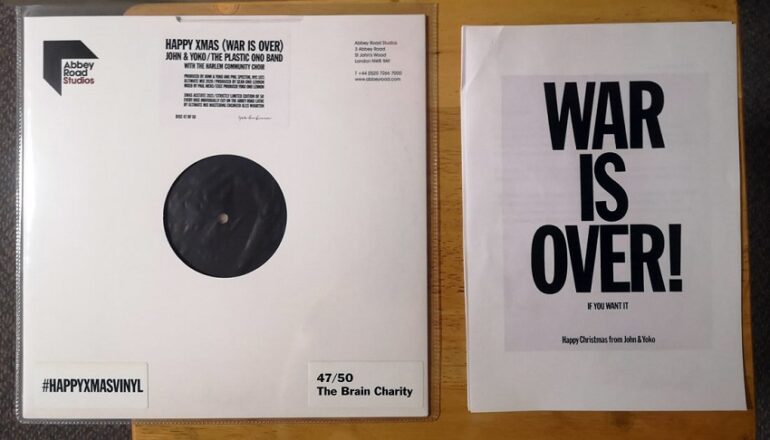 A Liverpool-based charity has said it is ‘bowled over’ to receive a rare acetate record from Yoko Ono, the widow of former Beatle John Lennon, and their son Sean Ono Lennon.

The rare pressing of Happy Xmas (War is Over) was one of 50 records gifted to charities and record shops so they can raise funds after Yoko and Sean said they wanted to ‘spread Christmas cheer’.

The Brain Charity said it was ‘hugely moved’ by the gesture.

The record is a one-sided 12″ acetate disc featuring John and Yoko, and was hand-cut on the lathe at the legendary Abbey Road Recording Studios.

Each edition is stickered and numbered out of 50 and includes a machine-printed signature from Yoko, making them hugely collectable by Beatles fans.

A note attached to each of the 50 records urged the charities to use the 12-inch vinyl acetates to ‘sell, auction and raise money’.

The selected charities and shops – which include 25 charities and 25 independent record stores – were personally chosen by Yoko and Sean and included a short note which read: “Happy Xmas. This is one of only fifty Limited Edition acetates hand-cut at Abbey Road, it’s yours – to sell, auction, raise money to help your business or your favourite charity or to fund your Xmas party – to spread Xmas cheer. We’d love to see the journey these acetates take, and the goodwill that they spread.”

The rare records have been sent to areas including Belfast, Birkenhead, Glasgow, Leeds, Liverpool, London, Manchester, Cardiff and Newcastle.

Tamara Schlesinger, who founded Hen Hoose, an all-female songwriting project in Glasgow, said she was ‘overwhelmed and honoured’ to have been chosen as a recipient of the record.

“I can’t wait to see what good we can do with the funds that we raise,” she added.

Happy Xmas (War Is Over) was originally released in the United States 50 years ago in December 1971. It was released a year later in the UK, reaching number four in the British charts.

The Brain Charity’s record is currently up for sale in a charity auction on Ebay here.

The Most Eggstravigant Easter Eggs