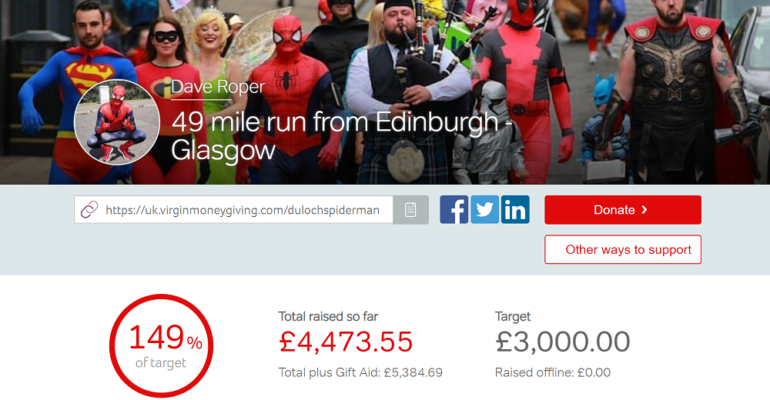 Dave, a 36-year-old father from Dunfermline, had been raising the towns spirits during lockdown by wearing a Spiderman costume on his daily runs. His latest challenge was inspired by the hard work of staff at Glasgow Children’s Hospital Charity and Edinburgh Children’s Hospital Charity as he took to the streets to run 49 miles from Edinburgh to Glasgow to raise funds for the charities.

The soaring summer temperatures made the running conditions extremely challenging, but Dave did not let the heatwave deter him, completing the run in 9 hours and 25 minutes.

Dave said: “Running 49 miles in full costume was the hardest thing that I have ever done in my life, and I couldn’t be more proud to have completed it whilst raising much-needed funds for two incredible hospitals.

“It has been such a tough time for everyone during this crisis and I feel it’s really important to do all we can to support charities who are working harder than ever to help those who need it most. You get a real buzz out of making people smile too while wearing the costume – it’s the kind of daft thing people appreciate during times like these.”

“During this challenging time, it is always humbling to hear about our supporters going above and beyond to make a difference. We are incredibly grateful to Dave for his outstanding fundraising efforts and hope the city of Glasgow enjoyed seeing their favourite superhero over the weekend!

“We rely entirely on donations and fundraising to allow us to continue supporting our hospital families during their darkest days with our charity-funded Play Programme and Family Support services. The public has shown such tremendous generosity for our young patients and hospital heroes over these challenging months, and we hope that beyond Covid-19, we can continue to count on this invaluable support.”

Running enthusiast Dave has already raised over £4,000 for the two charities to help them continue their vital work. To donate, visit uk.virginmoneygiving.com/dulochspiderman

A Bumper September for Bookworms as almost 600 New Titles Published

Winnie the Pooh and Friends Commemorated on Collectable 50p Coins