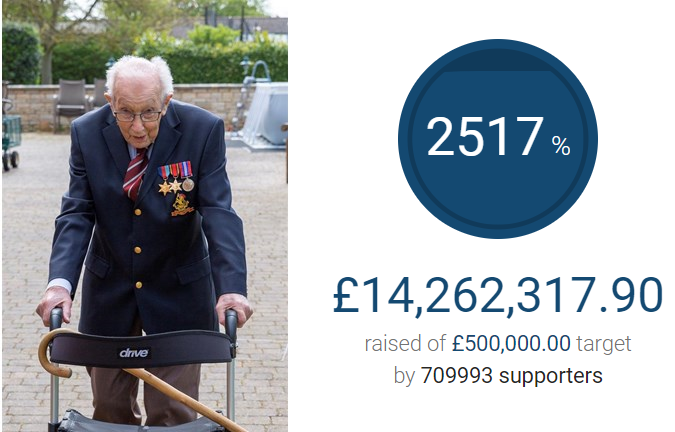 A former army captain and World War II Veteran has raised £14m for the NHS whilst walking 100 laps of his garden.

Captain Tom Moore, who celebrates his 100th birthday on April 30th, has been using his walking frame to help him complete his challenge ahead of his big day.

Tom’s kind-hearted gesture has not only captured the hearts of charitable Brits, but his efforts have also been recognised on a global scale, with donations flooding in from around the world. The large amount of people wanting to donate left the JustGiving website struggling to cope after over 90,000 people tried to sponsor him earlier on this week.

The 99-year-old had initially set out to raise £1000 to help frontline NHS workers as they battle the coronavirus pandemic, but he has smashed his target over 14,000 times in just under a week.

Captain Moore has been completing his task by performing ten laps each day around a 25-yard long circuit in his garden in Marston Moretaine, Bedfordshire.

Tom said: “I didn’t expect the challenge I set myself to get as big as this. The support I’ve had from across the world has been overwhelming. I have experienced people pulling together at times of crisis in the past and what’s happening today proves again the human spirit and community of our country is quite something. Thank you to the NHS at this terribly sad time. I am with you every step.”

The WWII veteran’s campaign even got a mention in Health Secretary Matt Hancock’s daily briefing, when he spoke directly to Tom: “Captain Tom, you are an inspiration to us all.”

Tom lives with his daughter Hannah Ingram-Moore who has said: “No words can express our gratitude to the British public for getting behind Tom, for making this into a heartfelt story. He’s a stoic Yorkshireman, he’s an unruffled straight-down-the-line kind of person and has embraced this adventure as the next stage of his life.”

In related news, Reegan Davies, an eight-year-old from South Wales, has launched her own online campaign urging children to create virtual birthday cards for Captain Tom to help him celebrate his milestone birthday.

Reegan has posted a short video on Twitter to thank him for his efforts and asks youngsters to get involved in a bid to send 1,500 cards to the WWII veteran. Her post states “We are kindly asking all kids across the UK to make him a Virtual Birthday card to say thanks”.

A Bumper September for Bookworms as almost 600 New Titles Published

Together As One Run raises Money for Children With Cancer UK