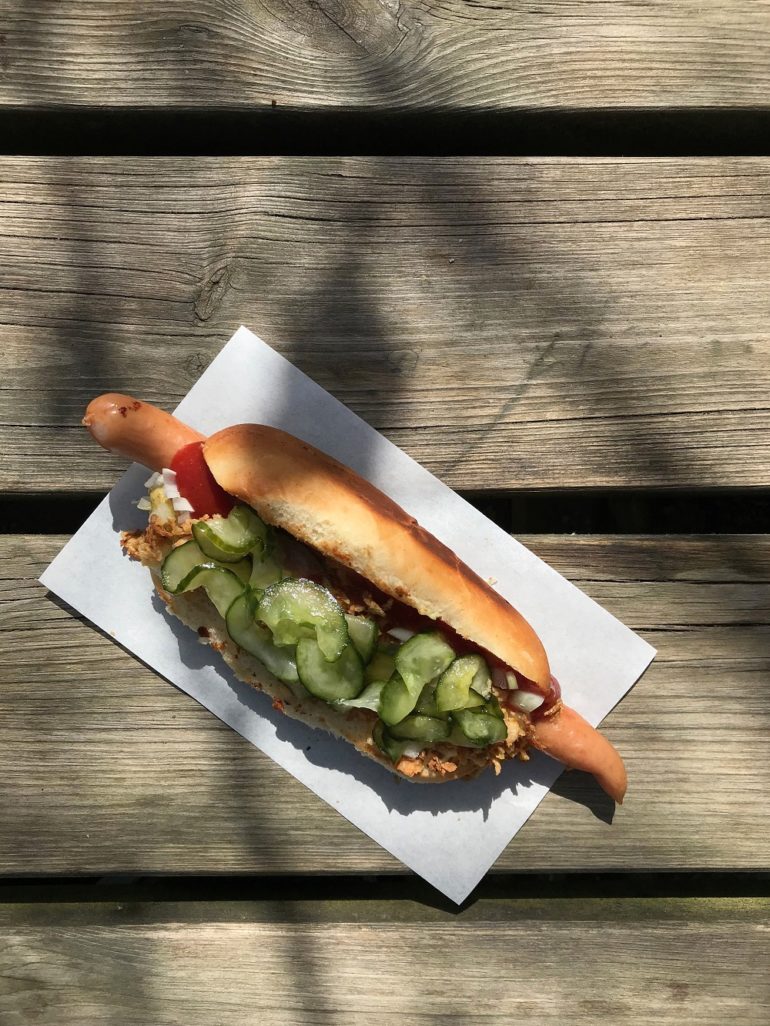 It’s been a busy month with a fair bit of travel and of course, some great foodie finds. I’ve wished for years that I could have a teleportation device so that I could quickly return to the places I’ve eaten amazing and unforgettable food. There’s never been such urgency for this machine, since this month I have two more mega morsels to add to my ‘When I get a teleportation device’ list. 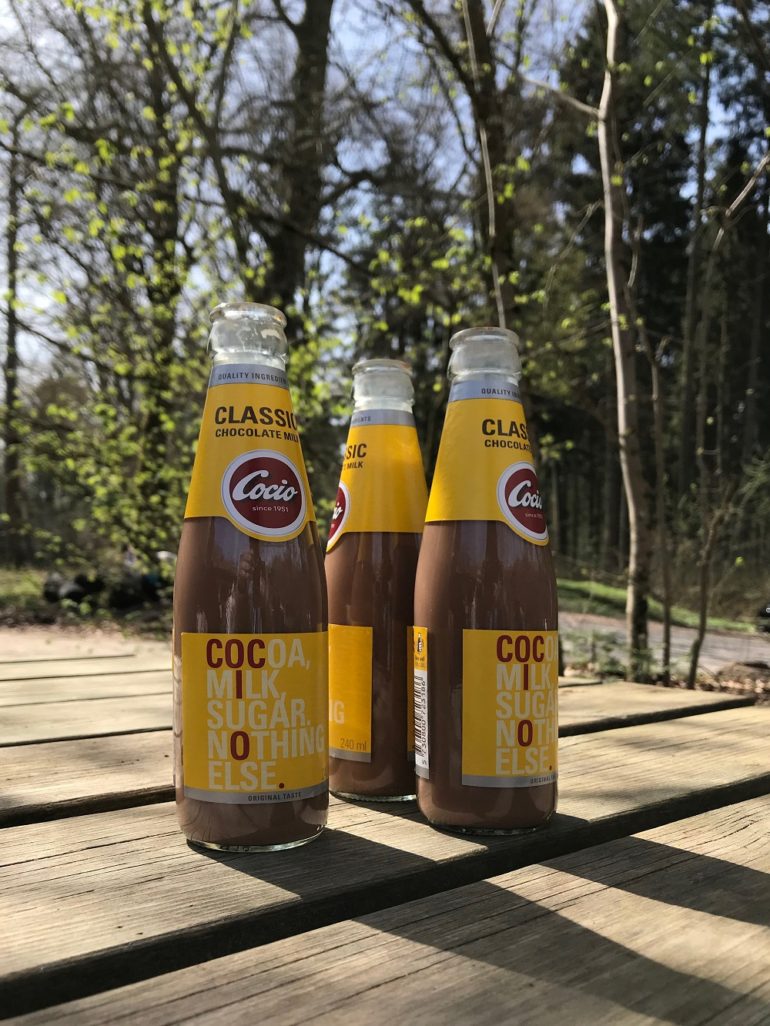 First, the best hotdog I have ever eaten. Hands down, no exaggerations, the best. At the side of the road on the 170 road in Skanderborg Denmark you’ll find Rasses. We found it because our friend Martin took us there when we were visiting him and staying in a castle. (Denmark is great!)  In the gutter outside we saw an abandoned half-eaten ‘other’ hotdog, obviously discarded when it’s eater realised they were missing the true prize. Eat in or eat outside, it’s fast food with great service and crispy onion bits on top. Apparently, it’s tradition to drink a chocolate milk too. 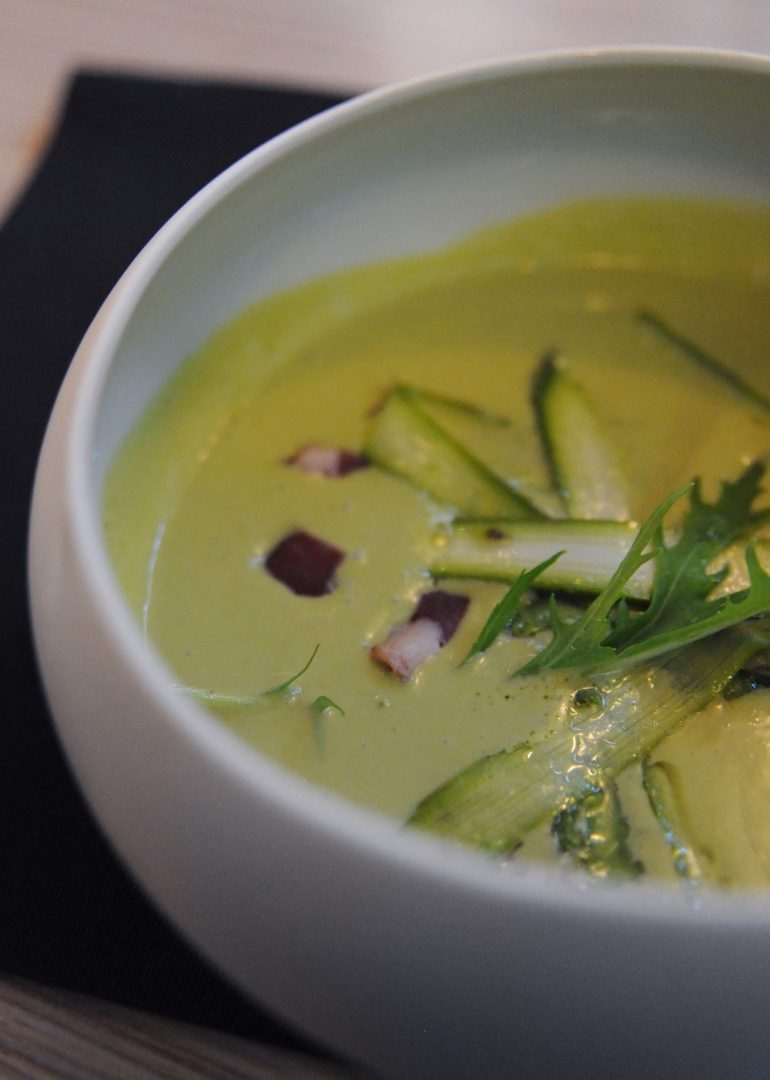 My second unforgettable item was this beautiful green asparagus and smoked duck vichyssoise. I was visiting the city of Vienne in France on a press trip and luckily had local advice. The place to go is Muse. The restaurant doesn’t have a website, you might struggle to find them online, but if you’re going to Vienne please don’t miss out.

I could have eaten several bowls full, and I could happily eat it right now. The rabbit risotto was also really good – really French, really local. 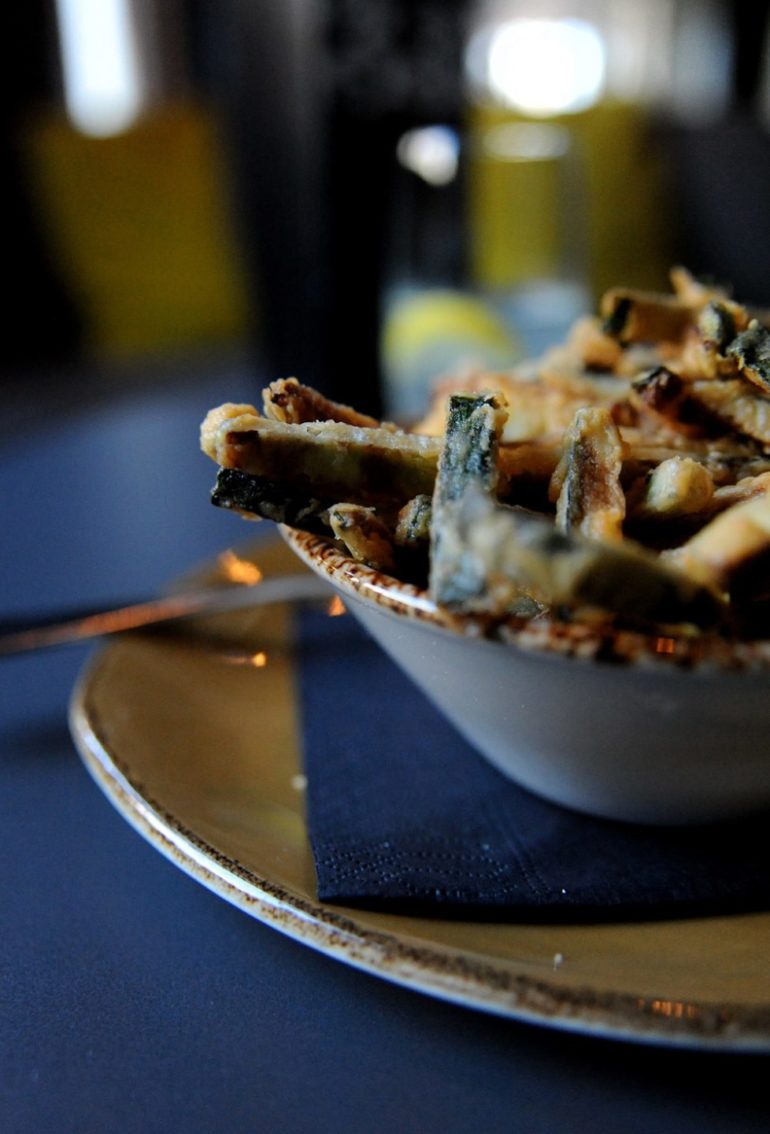 More food away from home, and this time in Holland, I have a few good things to mention. One, the courgette fries at 5&33, the restaurant within the Art’otel, Amsterdam. I had to stop off here to view the gallery, and with a bit of time to spare decided to make the most of the bar and lounge area. So peaceful! It was busy, but not noisy, and from the window I could see the world passing by, and Centraal Station. The beauty of this hotel haven is it’s proximity to the station, and that when you order Zucchini fries you get enough to feed a couple of people! 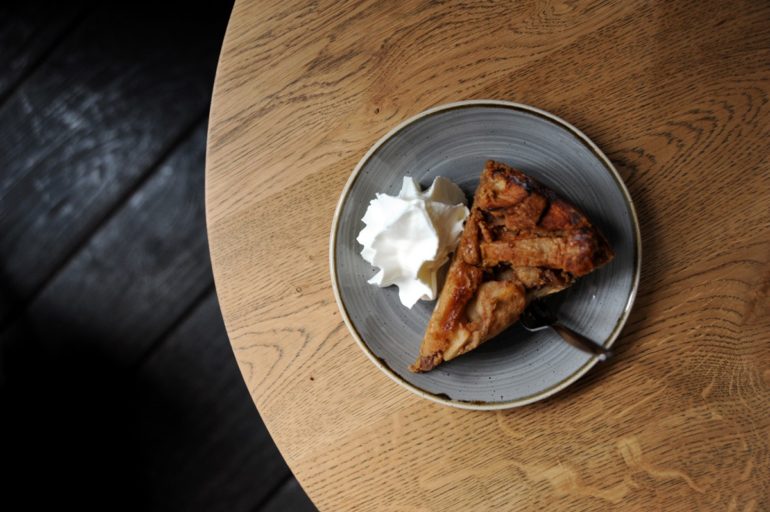 Also in Holland, but outside Amsterdam, in the beautiful city of Haarlem I had a few days of work, and a few days of eating. I did have an ‘award-winning’ hotdog at Thrill Grill, but it didn’t win any prizes from me, I don’t think shredded carrot belongs on top of my sausage (and I’m still not over the joy of Rasses!)

I did however have great apple pie and ginger tea in the fabulous Hotel Lion d’Or. I also saw, but didn’t sample, some great delights in the café of Het Dolhuys museum (and will return there some day!) 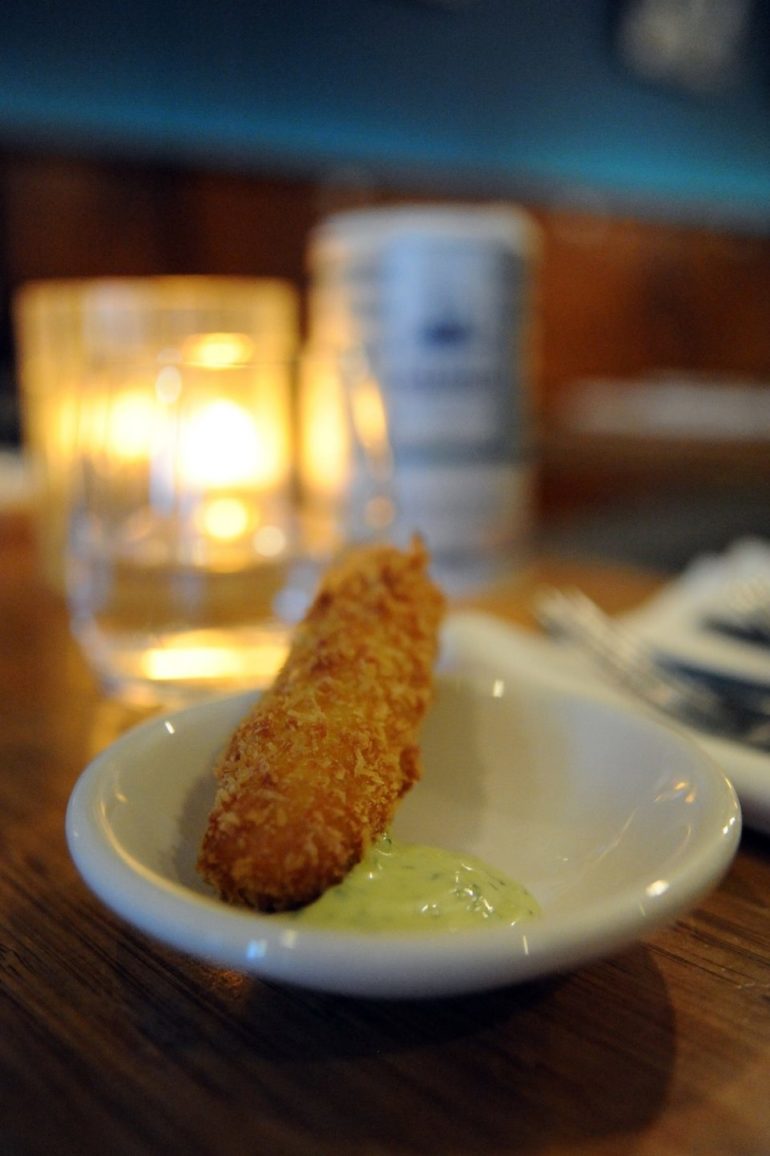 Then there was the dinner at Bij Thorlen, where I ate a white asparagus croquette with parsley sauce. Was this the best croquette I’ve ever eaten? It might well have been. Send more croquettes and I’ll tell you.

Bij Tholen has a seasonal menu serving mostly Mediterranean and Dutch food, but every few days they like to add in a special and the changing menu reflects what’s local and available. Indian lamb Korma with a coriander and garlic naan it was then!

I took a woman’s birthday photo and stroked a ginger dog before we headed off into the night, full of food and cheer. 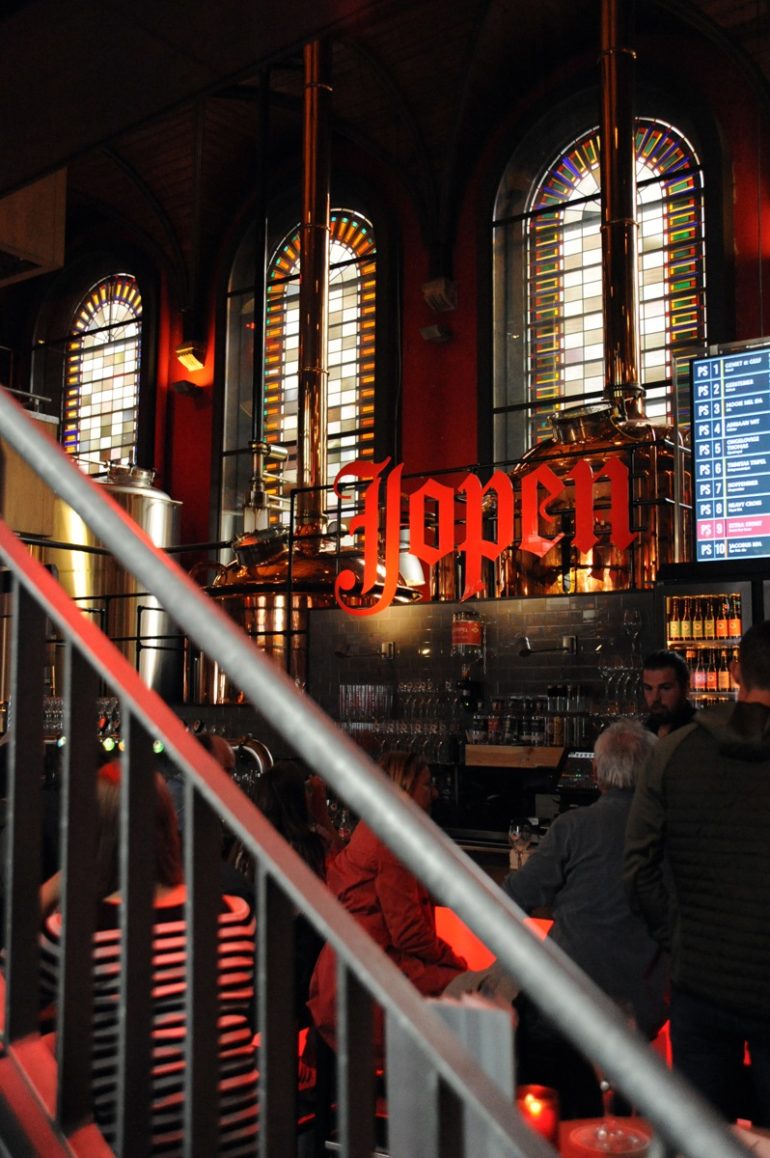 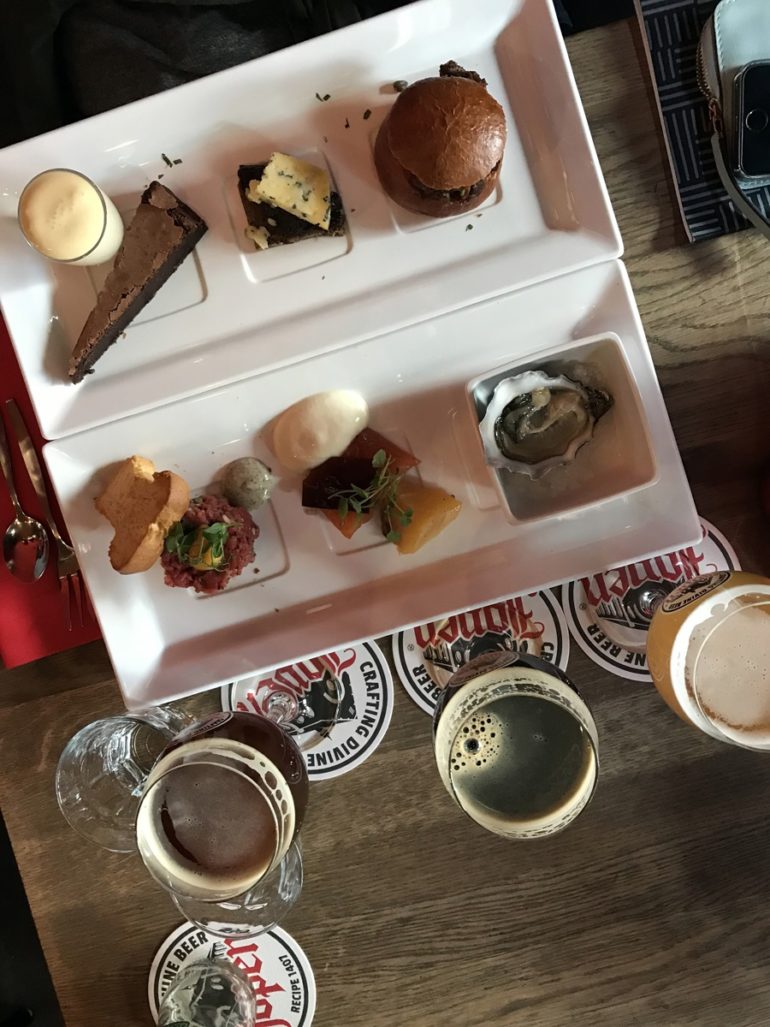 Another Haarlem gem is Jopenkerk – the brewery and bar built in an historic church that came close to demolition before Jopen came along in 2010 and saved it.

I was with my friend Polly, who had been invited to try the High Beer (like High Tea, but with beer, obvs) and I was allowed to observe with a soft drink.

Three beers, six accompanying plates. I watched Polly wrestle with her steak tartare and sip her way through to the Koyt beer. Made to an original recipe from 1407 Jopen Koyt is brewed with herbs, specifically Bog Myrtle. I had to have a taste. Legend has it that, to avoid its hallucinogenic properties, Bog Myrtle can only be picked at full moon by nude witches. You learn something new every day. 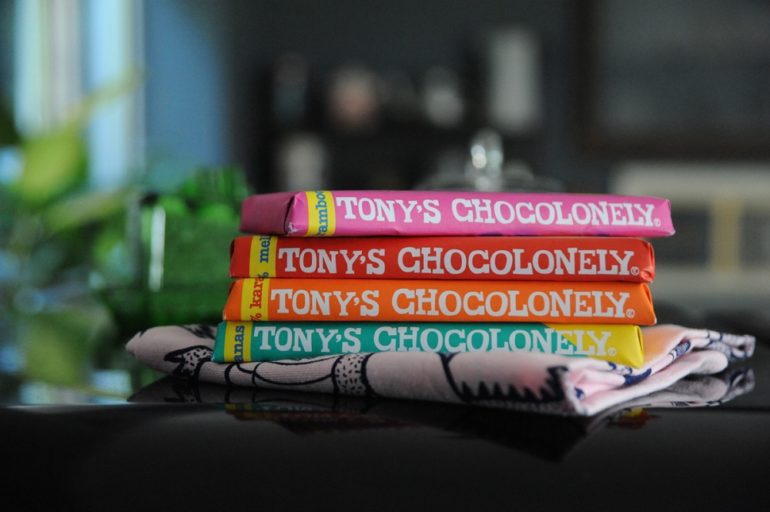 In Holland I had to stock up on Tony’s Chocolonely. I love this chocolate, their branding is great, and their ethics even better. Tony’s release different flavours as short run ‘exclusives’, so it’s worth keeping a look out for your favourite flavours, and stockpiling! My current Chocolonely of choice is the Dark Milk Pretzel Toffee. (When you order it, just make sure you put my address in the delivery details!)

This Wild West Jerky seems to be everywhere I look. Petrol stations, at the side of the tills in supermarkets, and it seems, displayed jauntily on my desk. I’ve never had chicken jerky before, had no idea it was actually a thing, but I liked it. I also liked the Honey BBQ Beef too. Basically, make anything sweet or spicy, and I’ll be happy to find it on my keyboard in the morning. 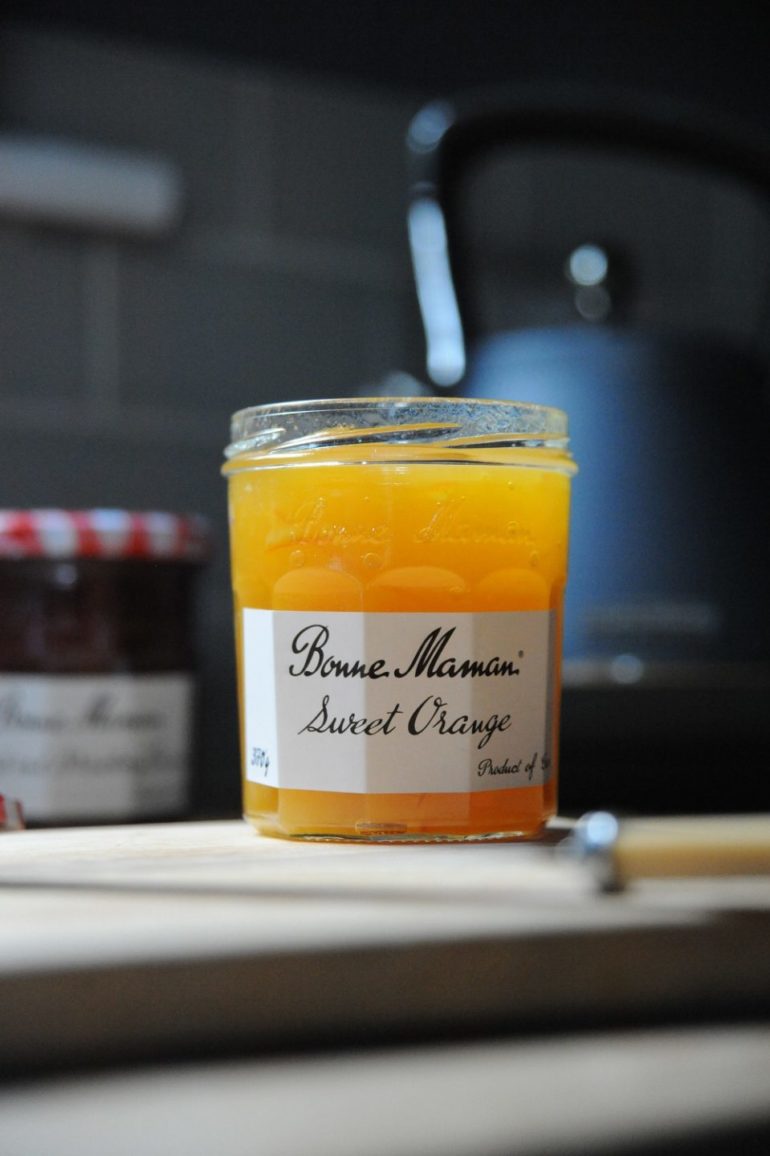 I have a favourite jam. Simple pleasures, it’s the Bonne Maman Raspberry Conserve. It’s got seeds in it, has a lovely texture and a slightly thinner consistency than many raspberry jams you can buy at the supermarket, and is perfect on buttered sourdough toast. It’s a classic.

A few alternative jars have sneaked their way into the cupboard though. The newest addition to the Bonne Maman jam family is the Rhubarb & Strawberry Conserve – it’s good on toast, but excels as a summer sponge cake filling. And then there’s the new Sweet Orange Marmalade that just excels on a spoon. Yum!

I don’t know if you’re supposed to sprinkle these Salted Caramel Munchy Seeds on your breakfast, but I poured them directly into my mouth. I’m often envious of those who can snack on a handful of heathy energy-giving nuts (allergies, huh!) so these roasted pumpkin and sesame seeds with coconut and sea salt are a winner for me. They do contain a bit of sugar (that’s what happens when you want everything to taste of caramel) but in comparison to the alternatives, I think they’re pretty great (and I’m even going to attempt to make my own version at home!)

And, in other foodie news…

Ginetta is taking the pride of Yorkshire with them to Le Mans this month (14 – 17 June). Six of Yorkshire’s leading food and drink brands have partnered with the G60-LT-P1 project ahead of what is undoubtedly the biggest race in the manufacturer’s sixty-year history. Bullion Chocolate, Harrogate Spring Water, Laurel Vines, Slingsby Gin, Wold Top Brewery and Yorkshire Tea have all joined Ginetta in taking on the Le Mans. I expect some proper picnicking to be going on there then!

I’ll be back next month with some more Foodie Finds to share, until then, if you’ve got something you think we should know about, please get in touch… send biscuits!

Shape up in 2017 at Chateau Lou Casteou