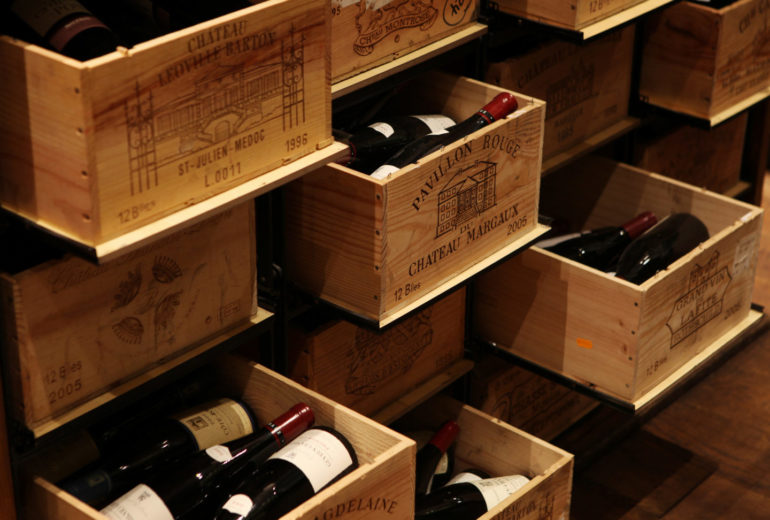 With a restaurant name indicating a 22-site address of outrageous proportions, I couldn’t help but expect 28-50 Fetter Lane to be housed in some sort of secret, City of London cavern. With the capital’s oldest wine bar, Gordon’s down Villiers Street, possessing not only of a sprawling outside promenade but also an arching dungeon fit for a Nordic metal video; I felt safe without Captain Mainwaring’s disapproval in allowing myself to fall into the realms of fantasy.

Opened seven years ago by Xavier Rousset and Agnar Sverrisson – the brains behind the Michelin starred London restaurant, Texture – Fetter Lane was the first of what is now a triumvirate of up-market wine-focussed London restaurants serving both by the glass and the bottle, with a suited French bistro food menu to boot.

A closer look into the name revealed that 28-50 is actually the degrees of latitude in both the northern and southern hemispheres in which vines can be grown, rather than the restaurant being a cavernous space flooded with wine bottles/stalagmites. I’d rather been looking forward to hearing the cacophonous echo with each cork popped in a swirling dark.

28-50 Fetter Lane is, however, still a large, subterraneous space, subtly lit by a sea of candles, illuminating a dark green and exposed brick décor over two floors. Both wood and glass are prevalent, as you’d expect from a restaurant orientated around wine, with a number of autographed bottles from famous visiting winemakers and sommeliers adorning the staircase down towards the dining area. 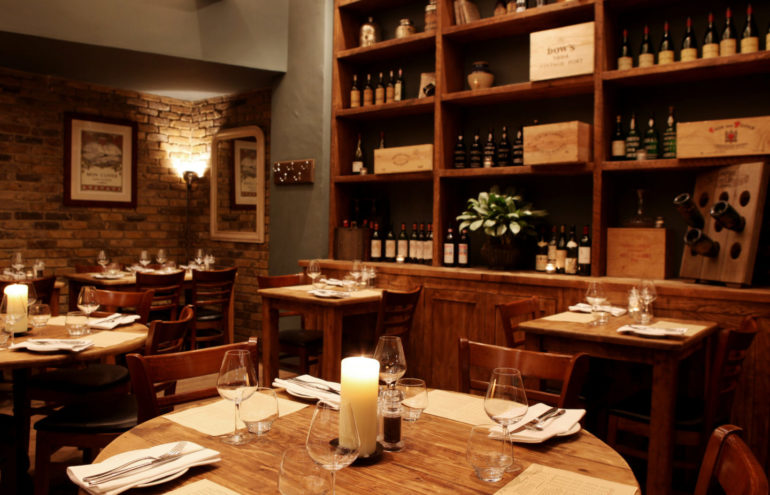 I had invited my friend Gunner along with me for the evening, a man who famously once said to me that we surely had the same glass of wine as they were both the same colour. I, on the other hand, have had quite a lot of experience with wine. With my dad a wine buyer and consistently bringing back samples from the continent throughout my childhood, I was introduced at an early age and never looked back.

With Gunner armed with the knowledge of the three different colours of wine, and I with a lifetime of vino, together we had all the tools with which to engage in an interesting evening of wine and food pairings. Not quite the stage for an Irishman and a 49-0, but in terms of plonk, pretty close.

Two glasses of the Champagne Henriot Brut took us to our table, seated us, and got the ball very much rolling. 28-50 Fetter Lane has two main wine lists, one holding the sommelier and coravin selections (the latter being the contraption used to siphon wine from the bottle without popping the cork), along with a selection of recommended glasses and bottles that range from between £5-£10 for the former and £20 plus for the latter.

The second wine list is a treasure trove for connoisseurs, with a rather naughty 1975 Chateau Cheval Blanc, 1st Grand Cru, for £499 catching my eye in the Bordeaux range.

The food menu also soon appeared and I saw that the head chef, Julian Baris, has gone with the classics and rightly so, considering the importance of matching the wine with the food. Imagine trying to match a foie gras doughnut with an appropriate rioja.

I couldn’t look past the heirloom tomato salad with goat’s curd and red olive for a starter, being such a vehement advocate of anything chèvre. Gunner felt the same about the smoked ham hock terrine with cornichons and sourdough toast, being such a fervent fan of ham.

Simple but supremely flavourful, my tomato salad was not only beautifully presented but also quite the dancer when partnered with a glass of the 2016 Gruner Veltliner Federspield, a mouthful of an Austrian white. The ham hock, arriving with a glass of the Portuguese Verdelho, did the trick for Gunner, who looked up at me with a look of amazement that his wine could work so well. Not because he thought he knew better, but because he wonderfully didn’t know at all!

On recommendation from our waitress, I opted for a main course of Norfolk lamb rump, served with ratatouille and a little pistou.

There is such a small window in which to attain perfectly cooked meat, what with resting times and all, and the kitchen absolutely nailed it. Casually dressed in the pistou – a garlic, fresh basil and olive oil sauce – and straddling a bed of unpretentious ratatouille; I felt like a dolly-zoomed Roy Scheider on that Amity Island beach right after my first mouthful. A joy, not a shark.

I really had expected Fetter Lane to excel in the wine, with the food taking the back seat, but I was wrong. This is an excellent restaurant paired with excellent wine, with a glass of the 2015 Cannonau Di Sardegna (a Sardinian red), which was suggested by our excellent sommelier, even further proof to the above. 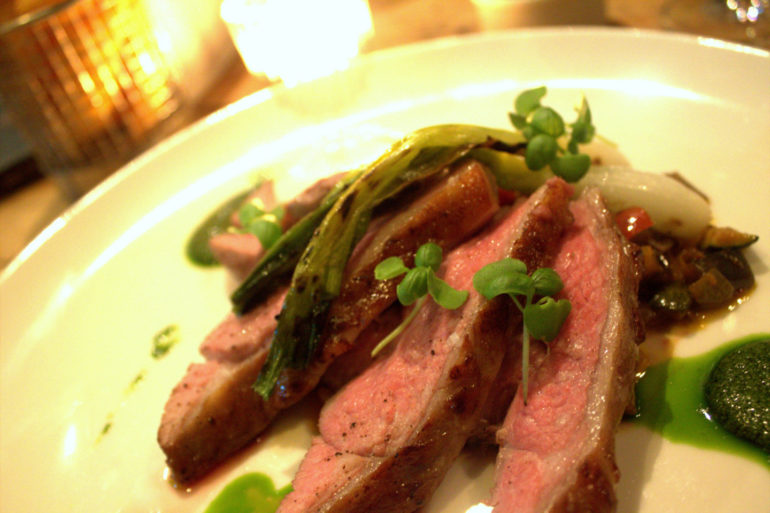 Gunner, meanwhile, busied himself with a medium rare Scottish rib eye, triple cooked chips and a glass of Malbec. I suppose he could have been Jaws himself with all that red flying around and his look of wild excitement in his eyes.

With desserts came the dessert wine. Now, I’ve never been a fan, but considering how brilliantly the meal had gone, I figured that to be placed in the hands of our sommelier and indeed the kitchen once again was my best chance at a change of perspective.

And so, after tilting the glass to see if it moved, I tentatively sipped at my glass of the Nectar Pedro Ximénez, said to be one of the sweetest wines on the planet. Teeming with notes of dried prunes, spice and even caramel, with a cheeky slice of the Saint Duthac Scottish ewes milk cheese as chaperone; I discovered the dangerously palatable lure of the sweet side, thinking that I should probably give port and mulled wine another shot sometime soon.

Sweet wine was a step too far for Gunner and instead tucked into a chocolate delice with salted caramel and raspberry sorbet, soon joining me in going into the kitchen to personally thank the chefs. The sommelier needed little more than a knowing nod. She had been with us every blissful step of the way. 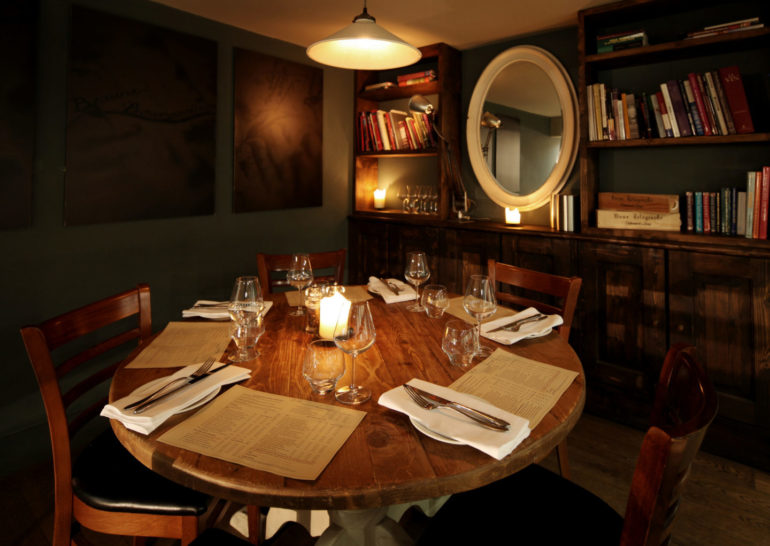