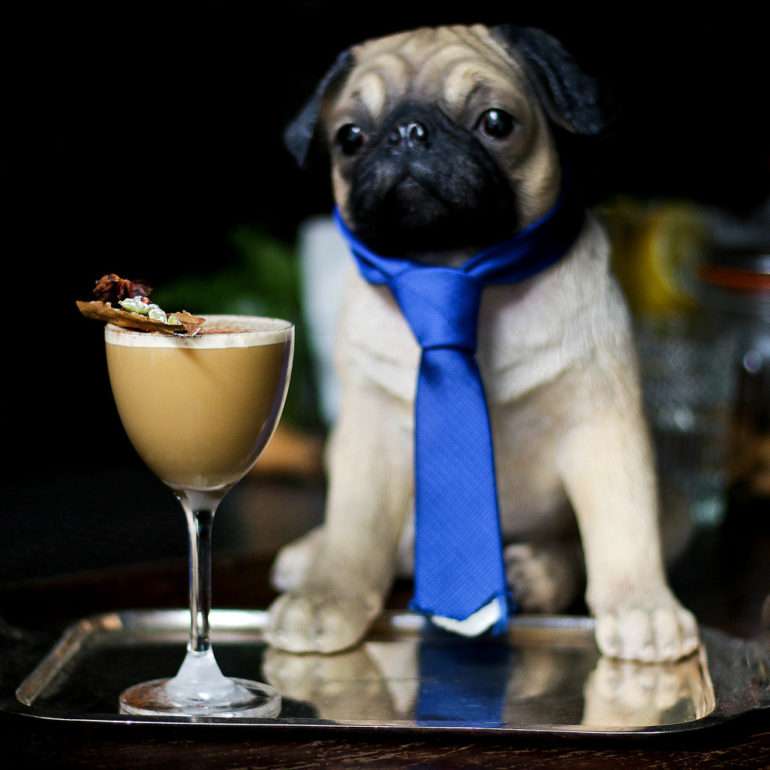 Best way to start here is with my companion’s second cocktail: The Bosom Caresser. Three parts cocoa butter and hazelnut Old Forester bourbon, two parts toasted banana and brioche cream, and one part walnut-vanilla essence. Not your usual cup of char, that’s for sure, but at the Cocktail Trading Company in Shoreditch, this could almost be seen as one of their normal cocktails. It was certainly the only one that arrived at our table in a glass that evening.

That said, with the barmen being a mad bunch of cats, they’ve gone and inserted a QR code on the description page in the menu as an accompanying explanation. And what happens when you follow it through? Only an hour long YouTube video of a Donald Trump rally – the original bosom caresser.

Welcome to your cocktail upgrade. 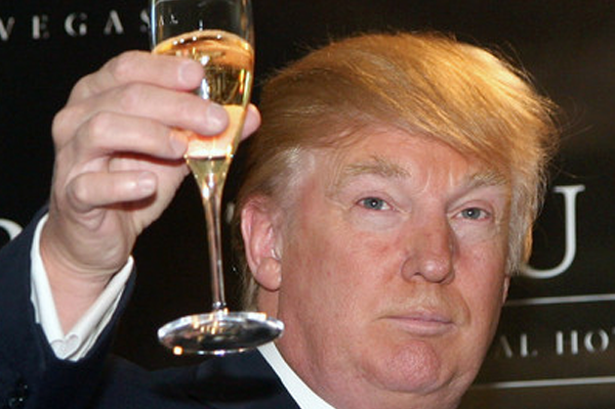 Having spent an evening there, its clear to me that the guys at the CTC are in heaven. Barman heaven, to be precise. Shareholders in the company, every one, operating around eleven of the most bizarre cocktails you’ll find in the capital, with carte blanche to play with an extraordinary armada of spirits and liqueurs that would make even the great Harry Craddock jealous.

And with the English summer being stretched out like an overworked snare drum just waiting to snap, Londoners are starting to really crave their custom cocktails. Gone are the days of White Russians being your average chap’s favourite (The Big Lebowski has effortlessly stood the test of time, however). We like to put ourselves in the hands of barman now, and with that kind of responsibility in the right hands, there can be all kinds of peculiar sherbets and medleys, spectacular syrups and creams, and obscure peppercorns and balloons.

I took my sister to the Cocktail Trading Company when they first opened, in the now defunct Smithfield branch, a couple years back. It was her first visit to a bar, and her first proper cocktail was quite literally a snow globe made by one of the three original founders, Olly Brading.

Cachaca, rosebud tincture, cardamom-vanilla infusion, lime juice and Sauvignon Blanc, with coconut flakes flying around the phone box in the centre of the globe – it was genius. And where did this genius come from?

“So we kind of just sat down and brainstormed while getting drunk,” Olly told me at the time.

“We would have a great night out or in, try loads of different things, get trashed but remembering to take notes!”

I still talk about that snow globe. 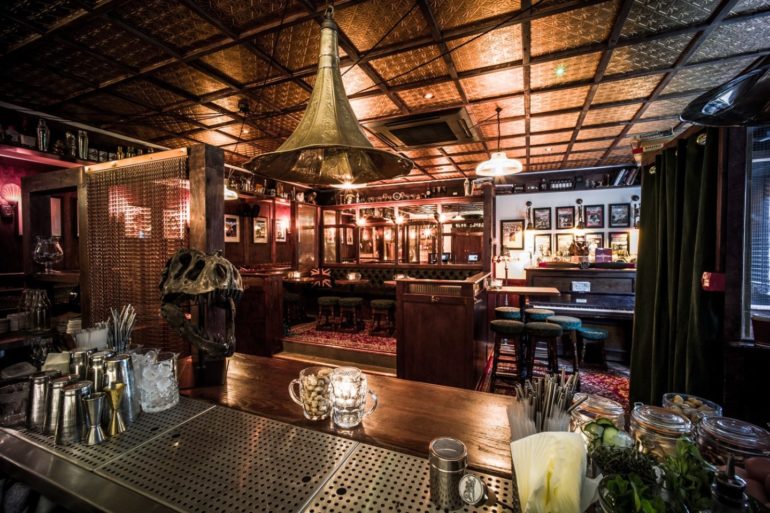 Small and very wooden, CTC in Shoreditch seats around 20, with every person getting personalised treatment from the four or so barmen, who all bound around like brothers showing off their rad new tree-house for the first time. They also have the requisite energy to explain the menu.

“Tales of a Wicked Past, Volume IV”, reads the cover of the menu on every table, with this the fourth incarnation that arrived only this summer. It goes on to explain that the eleven drinks have “taken inspiration from unsung classics of yesteryear”. It then encourages you to take their beer mats and monkey nuts.

The Jack Rose was my first choice. Jagermeister, Banoffee-Apple Brandy and Ginger-Redbrush Gelato. 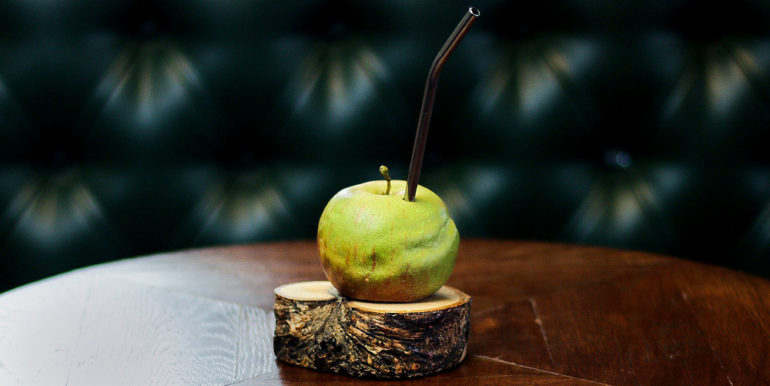 That’s right, it looks almost exactly like an apple. Welcome to the next part of crazy at CTC; the vessels. Guaranteed you’ll spend almost as much time examining your drinks as actually drinking them.

Not being able to see the colour of your drink is also a thing. I expected, before taking my first sip, that I was in for an overpowering taste of Jager but, quite surprisingly, the Jack Rose cocktail is not at all dominated by the German stag and his outrageous liqueur. It was sweet, and punchy. Certainly strong, but not overwhelming.

My companion, Canada, got herself the Blue Moon – a naughty mix of shiitake bols genever, sharp green tea, celery and basil sherbet and Violette in a miniature hot air balloon, and covered in umami floss. 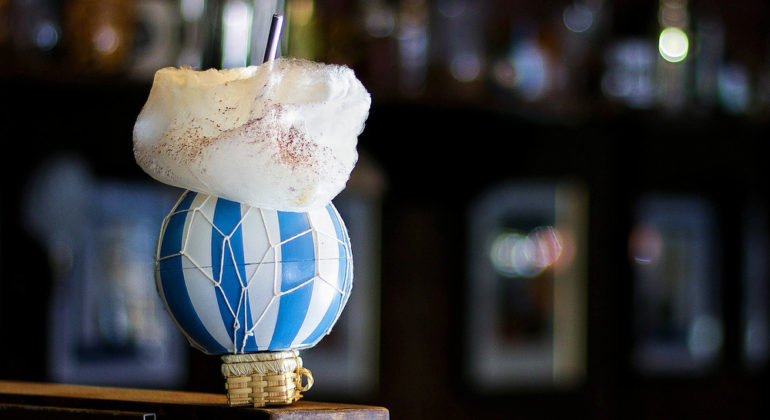 Don’t worry if you’re not acquainted with anything in your drink, just flag down one of the rebounding barmen and they’ll be happy to take you through. I stuck my hand up and asked what the genever was in Canada’s drink, and our barman, Rod, told us with great glee that it is the grandfather of gin and, on its own, tastes a little like a mix between gin and beer. I tried a bit, and he was quite right.

No wonder it never made it mainstream, I thought, but it had certainly found a home as a grounder for Canada’s cocktail, which was upliftingly flamboyant and floral as anything. It also took her an age to finish, floss and all, certainly giving value to the across-the-board £9.50 price tags on the cocktails.

I put myself in the hands of our barman for round two and off he went with a little skip. Canada continued with her specific menu research and went for the aforementioned Bosom Caresser, not that she gave ol’ Trump any real credence bar a chuckle. Trump and boobs.

Not before long I was looking through a magnifying glass at the Kray twins.

The Scofflaw: Three parts Glenmorangie Lasanta, two parts Paloma sherbet, one part pomegranate and sesame pruno, and a pinch of pink peppercorn and mint – all gracing a thick tumbler with accompanying magnifying glass, copper and assorted metal arms, and an old photograph of the gangster brothers from the 1960’s. 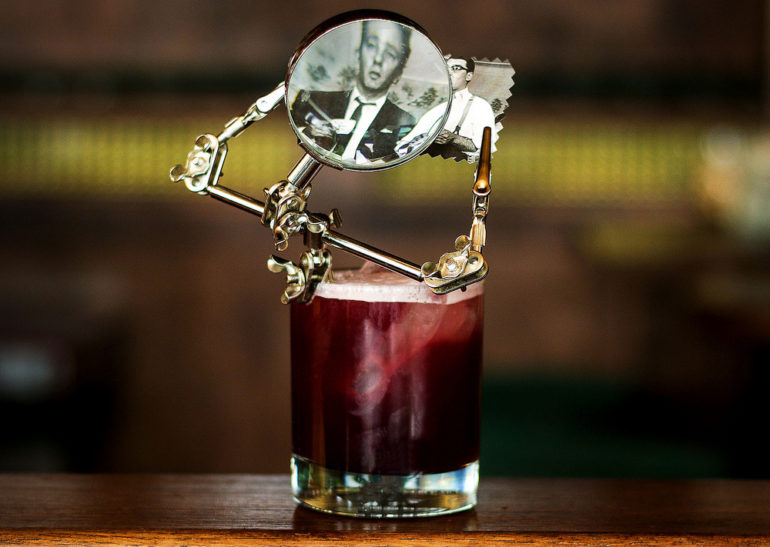 Glorious Adventures & A Taste of Bombay at Dishoom, Shoreditch