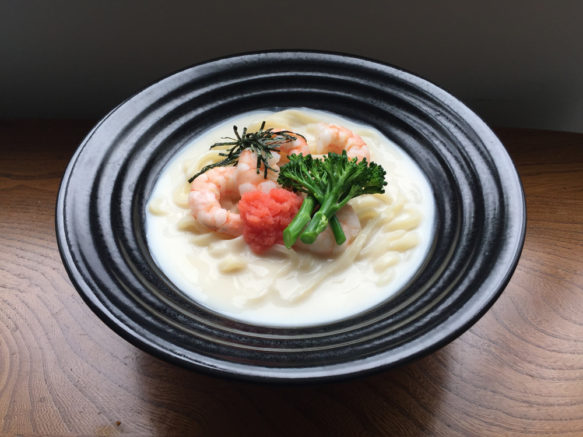 England is pretty good at soups and stews. Be it a hearty vegetable broth, a rich meaty one or a medley of all things cupboard; a soup is a great way to cleanse the soul and fill a hole. Those on the continent are also pretty good at the whole thing, with Spanish gazpacho, French bouillabaisse and Italian minestrone all cornerstones of European cuisine. Even the Americans have the gumbo. But it’s in Asia where the soup is at its most widespread and important. And that’s due to its eternal bond with the noodle.

Stocks, broths and soups are staples of Asian cuisine, especially in the East and Southeast. Ramen noodles, wonton noodles and soba dishes are well known up and down the UK, with all using either a dashi or meat broth as the foundation. Udon noodles are also often paired with broth, with the dish a heavyweight in Japan – something Japanese udon restaurant Ichiryu have brought to New Oxford Street in London with a bang.

Established in January of this year from those behind the Japan Centre and Shoryu Ramen restaurants; Ichiryu specialise in Hakata udon noodle broths mixed with all manner of different toppings (Hakata, the capital city of Fukuoka, is known to be one of the birthplaces of the udon noodle). Aimed at those looking for an exotic yet fast luncheon in the area, Ichiryu are masters of the craft.

And with winter coming, we decided to pop along one weekday afternoon to fill up on stock. 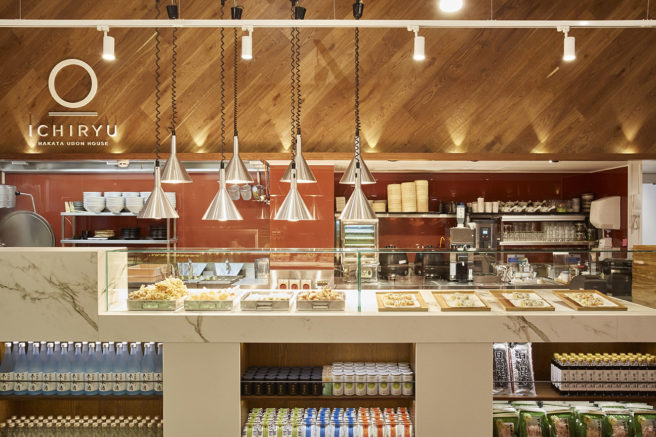 Brimming with lights from an exposed ceiling, with varnished new wood tables and blue banquettes circling the decidedly clean dining space; Ichiryu is fancy but accessible. A separate udon preparation room stands just on the left as you walk in, with people outside standing watching the chefs through the window as they work.

When we arrived, there were tables and tables of Asian people enjoying huge brimming bowls of broth. I was told when in Hong Kong that a sure sign of a good Asian restaurant in England was the amount of Asian people dining inside, and if that is anything to go by, Ichiryu is on the money.

Attune to the needs of the locals, our waitress immediately informed us that most of the dishes on the menu would take between ten to fifteen minutes to prepare. No time at all in the grand scheme of things – when was the last time you got your food in a restaurant in under 10 minutes? – so I said we’d just about manage it and sent away for a couple of cocktails while we had a gander at the menu.

Ichiryu specialise in either hot or cold udon dishes, usually in a tsuyu bonito soup or sauce respectively, to either eat in or to takeaway. Tsuyu is a concentrate extracted from katsuobushi bonito flakes, kombu kelp and soy sauce, then diluted in water to create a dashi. The tsuyu and udon form the base of the dish with meat, protein and/or vegetable toppings then added to finish.

Ichiryu offer ten different hot udon dishes and seven cold, with my companion Penny and I both opting for a hot lunch. I chose the Kimchi Jjigae (£15) while Penny fancied the Niku Beef (£11.90). Ichiryu toppings come in the form of tempura and, going a bit mad with power, we wanted the prawn (£3.80 for two), aubergine, courgette (£1.50 each) and sausage (£2.00 for two) varieties.

If you’re feeling ravenous, you can also send away for a number of different sides such as pork gyoza (£7 for six) and Hakata buns (£4.50 each), with their varieties of onigiri (rice wrapped in nori seaweed with different toppings, £2.40 each) also very much worth a look.

While not the cheapest lunch by any stretch, the extra dosh is certainly put to good use by the wizards in the open kitchen. 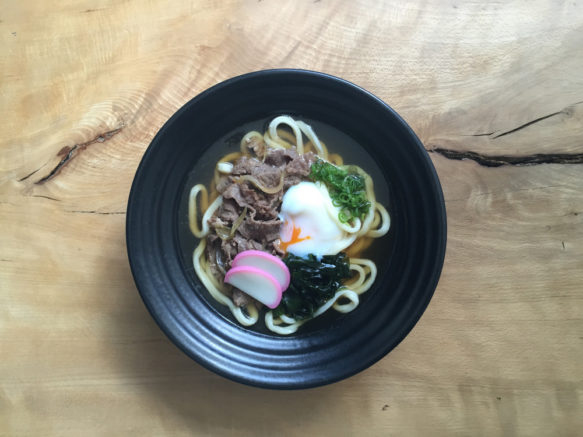 The above Niku Beef was enough to feed a platoon. Sukiyaki beef, ontama egg, spring onion, kamaboko fishcake, wakame seaweed all in a tsuyu bonito soup. The slow-cooked beef, traditionally prepared in a pot of soy sauce, sugar, and mirin, threatened to blend into the soup such was its tenderness. The key I feel with udon noodle soups is the egg, soft as anything, with the yolk mixing elegantly with the soup, with this a perfect example.

My Kimchi Jjigae was also full to the brim. Kimchi, pork, ontama egg, tofu, enoki mushroom, leek, spring onion, wakame seaweed in spicy kochijan soup to be precise. This was a complex mixture of both Japanese and Korean, with Jjigae a Korean stew-based dish, kimchi a staple vegetable side in Korean cuisine and kochijan (or Gochujang) a Korean condiment.

It was a powerhouse, spicy and flavourful with so many different components all adding to the experience. The pork was tender and plentiful, with the enoki mushroom (the long and thin variety of shroom) and the slightly sweet wakame seaweed also highlights.

Our pieces of tempura all stood the test but, somewhat predictably, the prawn came out on top. Soft and crunchy, tempura is an ideal companion for udon soup being so absorbent.

Being so big, both got the better of us, and we were happy to have ours packed to go, surely mirroring the vast majority of those others stopping by for lunch. Forget sandwiches from Sainsbury’s, this is what you need for that #MondayMotivation. 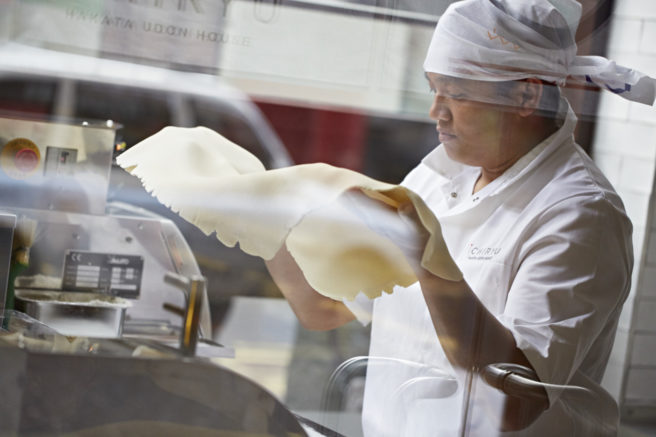 Celia Birtwell teamed up with Macmillan

Get The Look Kate Moss Style