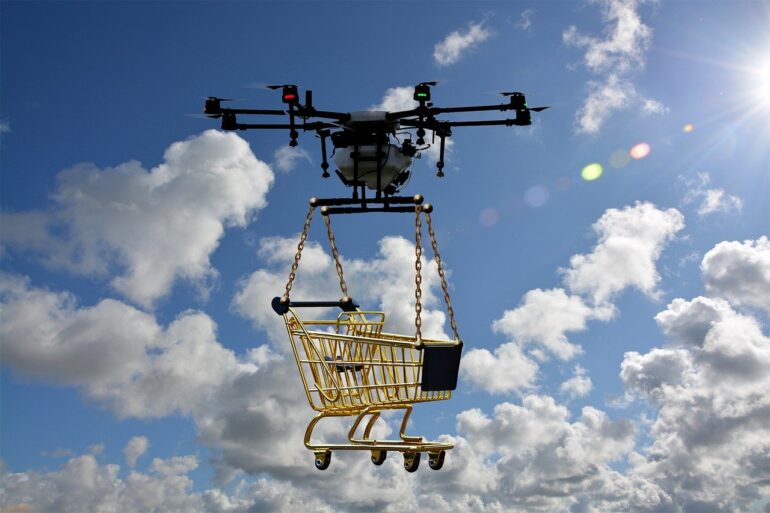 Supermarket giant Tesco is set to trial drones for shopping deliveries from October, using technology designed to deliver orders in as little as thirty minutes.

Under the plans revealed by Tesco bosses, customers living near the trial store in Ireland will be able to order a ‘top up’ basket of a few items for air-drop drone delivery to their home. If the pilot scheme proves successful there is potential to roll the technology out to other stores in the future.

Tesco has partnered with drone delivery start up service Manna for the pilot scheme which is due to begin next month in County Galway. Manna are also the delivery partner of Just Eats for their takeaway drone delivery drops.

The group’s innovation director, Claire Lorains, commented: “We’re really interested to see how drones could be part of the solution to deliver to our customers on-demand small baskets.” She also noted that the small basket market in the UK was forecast to exceed £10 billion ($13 billion) over the coming years.

“If our trial with Manna is successful, we really think there is an opportunity to reach many customers through our stores extending with a drones service,” she said.

Dave Lewis, the chief executive of Tesco, said: “They (Manna) have already proven the capability, the question is how do we take that capability and apply it to Tesco and that’s the detail that’s been worked on now before we get to the trial.”

The move comes as supermarkets and food retailers around the world seek to expand their delivery services in the wake of the COVID-19 pandemic. Tesco started testing drones a few years ago, but online retailer Amazon claimed its first Prime Air drone delivery in 2016 when it delivered a TV streaming stick and box of popcorn to a customer in Cambridge.

Also, this week US-based Walmart, the world’s biggest retailer and owner of Asda in the UK, announced that it would run a pilot project for drone deliveries of groceries and household products, with end-to-end delivery firm Flytrex.

How to Look After Your Fridge & Its Contents