After the disappointment of losing on penalties to Italy in the Euro 2020 finals, the nation can now look forward to a further summer of sport with the Tokyo Olympic Games set to begin on July 23.

The Tokyo Olympics was due to take place in 2020 but was postponed by a year due to the global pandemic and restrictions on international travel.  There are still restrictions in place in Japan and the Japanese government have said that no fans from overseas will be allowed to spectate at the stadiums.

There will be over 350 hours of coverage of the Games broadcast on the BBC, with presenters Hazel Irvine and Gabby Logan co-hosting daily shows. They will be joined by pundits and former Olympians Victoria Pendleton, Chris Hoy, Rebecca Adlington and Nicola Adams.

There are also new events to watch out for, and for the first time, the iconic winner’s medals will be made entirely from recycled materials.

Going for gold with sustainable medals

Olympic athletes will be striving for medals throughout the Games, which run from the opening ceremony on July 23 to August 8, followed by the Paralympics between August 24 and September 5.

However, this year, the coveted gold, silver and bronze medals will also be ‘green’, as they will be manufactured from 100% recycled metal. The Tokyo 2020 Medal Project was an initiative that encouraged people across Japan to donate their unused electric devices, such as mobile phones, to produce the Olympic and Paralympic medals.

An astounding 78,985 tonnes of devices were collected and from this, approximately 32kg of gold, 3,500kg of silver and 2,220kg of bronze was extracted to make the 5,000 medals that will be awarded at the Games.

The mascots for the Olympic and Paralympic Games were voted by schoolchildren in Japanese schools, and the two mascots – Miraitowa and Someity – won with an overwhelming 109,041 of the 205,775 total votes cast.

The fox-like Miraitowa’s name translates as a combination of the Japanese words for ‘future’ and ‘eternity’. The Paralympic mascot, Someity (pronounced ‘so mighty’) is named after the Japanese cherry blossom Someiyoshino. 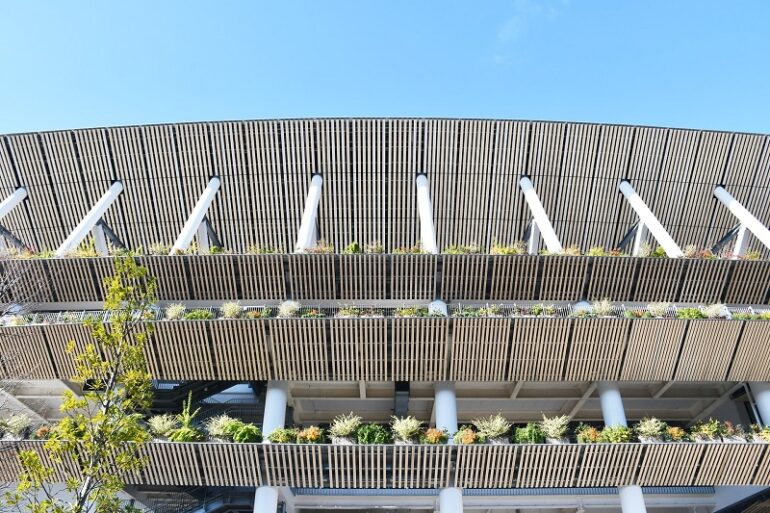 The showcase stadium for the Olympics’ opening and closing ceremonies will be the Japanese National Stadium, which has largely been rebuilt in recent years after the country’s successful bid to host the 2020 Games. It’s thought that the athletics and football events will also be hosted there.

Four of stadiums featured in the 1964 Tokyo Games are still in use and will be hosting table tennis (Tokyo National Gymnasium), handball (Yoyogi National Stadium), judo and karate (Nippon Budokan) and show jumping and dressage (Equestrian Park).

While Tokyo is the central point of the Games, Sapporo will play host to the group stages of the football, while Fukushima will hold the baseball and softball tournaments.

New sports and disciplines for the 2020 Games

World-class surfers will be heading to Tsurigasaki Beach, where a gold medal is up for grabs as surfing makes its debut on the Olympic stage.

Surf permitting, the surfers will take to the waves over four days with the top two surfers in each heat progressing towards the winners’ podium.

Skateboarding is another new sport to watch out for in Toyko, with the top talent competing in a street skating course with handrails, stairs, walls and benches. Watch out for Brazilian street skateboarder Leticia Bufoni, who is tipped for victory this summer.

Another discipline, park skateboarding, where competitors navigate a complex course of hollowed out bowls and curves, is on the agenda in 2020.  Team GB could be in with a medal chance with 13-year-old Sky Brown, who became the youngest pro-skater in the world at the age of 10.

Great Britain returned from Rio in 2016 with an impressive 67 medals, which included a bronze medal for Amy Tinkler, Team GB’s youngest medallist – and a gold medal for Nick Skelton in the show jumping, who became the nation’s oldest Olympic medal winner in over 100 years at the age of 58.

Team GB boasts an equally formidable array of talent looking to add to the medal tally in Tokyo, with hopefuls including: