Written by: Mad as a March Hare 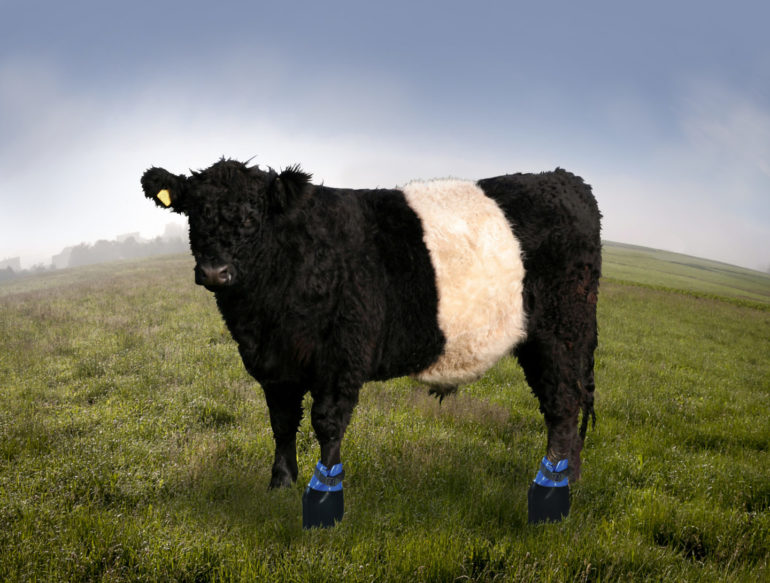 1st April, Farmers grazing cattle on the steep slopes of the Malvern Hills have found some of their herd’s downward-facing legs developing joint problems.

The problem had become so serious they were faced with having to remove them from the hills to protect the animals’ welfare, unless a solution could be found. The cattle are popular with visitors and also help to control invasive species.

The Malvern Hills Trust approached the economic development team at Malvern Hills District Council in a bid to solve the problem.

Together with local boffins, they have come to the rescue by providing bionic boots to the affected cattle, which ensure they graze on the level, no matter how steep the gradient.

Developed by members of the Malvern Radar & Technology History Society – the boot makes use of cutting edge technology from mobile phones to adjust the boots and keep the cattle level. Commenting on the boots, Mike Burstow Vice Chair of the Society said:

“Farmers appealed for help to ease the issue of arthritis in cattle grazing on the steep slopes of the Malvern Hills. Using the principles of a self- levelling radar antenna developed first in WWII for British airborne radars, Malvern scientists have teamed the idea with the latest blue-tooth and GPS technology to come up with a bionic boot to reduce the uneven pressure on the animals’ feet. The cattle charge small batteries in each boot just by walking about using a piezo-electric generator.”

Visitors to The Malvern’s love seeing the Belted Galloway Cattle on the hills, so we really wanted to find a solution to keep them there. Thanks to Malvern’s scientific heritage, the town has been able to draw upon some of the sharpest technological and engineering minds in the UK to create the Bionic Boot.