All lists are subjective, and none more so than this one; the 1990s was the decade in which I began to take a serious interest in music, and developed my own tastes and opinions. It’s a time when the genres began to diversify, as the mainstream narrowed and alternative avenues opened, brought on by new media channels from the fledgling internet to digital broadcasting by the end of the decade and, indeed, century.

All of this created a battleground that made it harder for vinyl to survive, save for the growing band of revivalists. It means that this list – purely personal and n chronological order only – contains albums that may be rarities on the second hand market, whilst others have been re-released. 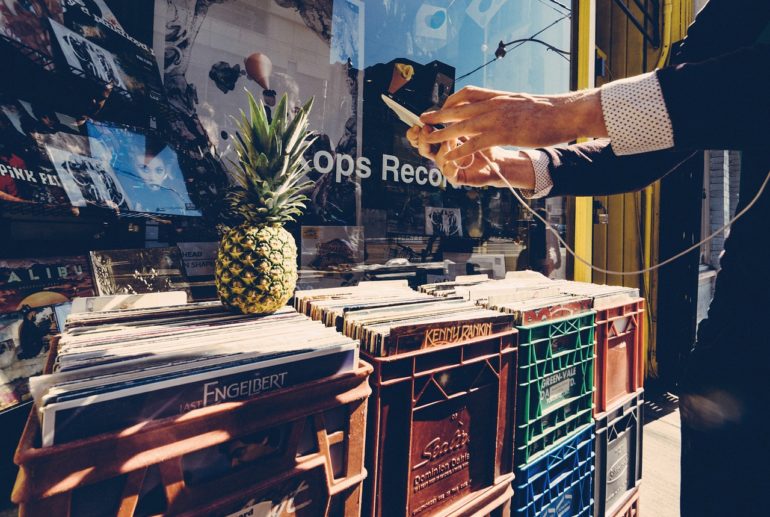 Part three of this series of articles ended with the Stone Roses’ eponymous debut, which opened the musical floodgates for me. One of my early discoveries happened to be this band of sonic experimentalists, who were quickly added to a scene known as ‘shoegazing’, so-called because they mainly consisted of guitar players staring downwards (actually focussed on playing their instruments) instead of at the crowd. Ride’s music at the time of their debut album was unconventional, to some impenetrable, but had a majestic quality and a refreshing refusal to conform to conventional song structures. The band also had two fine songwriters in Mark Gardener and Andy Bell, although the pair would soon disagree, forcing the band to split in the middle of the decade. They reformed in 2015, and material from this LP is still amongst the most anticipated in their sensational live shows.

The effect of acid house on 1980s indie acts was revelatory; it soon became a cliché for many of them to suggest that ‘there had always been a dance element to our music’ when releasing new singles. Few achieved this as convincingly as Primal Scream, who, like their peers Happy Mondays gave DJs permission to remix their material. The first result of this collaboration was Loaded, a complete reconstruction of the band’s I’m Losing More Than I’ll Ever Have. Originally a Stones/Faces-style ballad, DJ and producer Andrew Weatherall turned it into a euphoric call to arms for the rave generation with a Peter Fonda sample from The Wild Angels and, keeping the Stones connection alive, a rhythm track that owed more than a little to Sympathy for the Devil. Singles Come Together, Higher Than The Sun – featured twice, including a spectacular dub remix with Jah Wobble bass –  and Don’t Fight It, Feel It developed the template, as did this landmark album. It combines a trippy 90s feel whilst paying dues to the band’s heroes, from their cover of 13th Floor Elevators’ Slip Inside This House to Damaged, with its Ronnie Wood-style solo.

Heavy rock may have found its savour in Nirvana, but it was an accolade that sat uneasy on the shoulders of Kurt Cobain. His band had little in common with the guitar slingers of 80s America, and a much greater affinity with pop bands includes the Beatles and obscure Scottish acts such as The Vaselines. Nirvana celebrated life’s outsiders, which ironically added even greater strain to Cobain’s heavily-burdened shoulders as he was expected to be their spokesman. All this was made possible by the huge success of Nevermind, originally recorded as a new direction for the band, combining their hard-edged grunge guitar sound with more accessible pop melodies and structures. It also helped that the album contained Smells Like Teen Spirit, a monster hit worldwide. Kurt’s efforts to shake off the unwanted adulation ended in tragedy, but drummer Dave Grohl and producer Butch Vig would later become superstars. Regardless of the outcomes, this is a landmark album that remains an invigorating listen, from the punk-inspired thrashes to its touching ballads.

After a relatively low-key start in 1990, Blur became one of the defining bands of the decade, unleashing Britpop into the mainstream in 1994, and conquering the charts in a way that The Smiths and Stone Roses never did. Parklife captured the zeitgeist perfectly, but before that came Modern Life is Rubbish, a far more reflective look at Britain. Steeped in romantic nostalgia and a British tradition for celebrating eccentric characters that hails back to the music hall, it’s also a reaction to the US grunge invasion that was almost to the exclusion to all else at the time. This first attempt didn’t storm the charts, but it did add momentum to a growing movement that would dominate just 12 months later. Where this album scores over Parklife is its gentler, introspective style, whilst still showing moments of grandeur, particularly on proto-Britpop-anthem Sunday Sunday.

Released a few months after Blur’s Parklife, Mancunian rivals Oasis dropped their own particular bombshell on the UK music scene, combining the Stone Roses sound and attitude with a more traditional rock sensibility that borrowed heavily from the Beatles and Stones. Singles Supersonic, Live Forever and Cigarettes and Alcohol heralded a confident swagger that transcended indie and ushered in lad culture. But beyond the bravado there’s an album full of classic rock tunes, proud guitars and youthful optimism before drugs and indulgence took over on later releases. Liam Gallagher’s voice also has an innocence on this record that’s perhaps best demonstrated on penultimate track Slide Away. Whilst they went on to greater achievements, for me this is their peak.

Contemporaries and friends of Oasis – the band’s Cast No Shadow was inspired by front man Richard Ashcroft – The Verve never quite achieved their potential  in terms of commercial success before they split for the first time just after this masterpiece was revealed. Greater things may await the reformed band two years later, but A Northern Soul has a wonderful atmosphere that recalled their earlier work, yet tempered by more conventional song structures. There’s northern confidence in opener  A New Decade, soul in On Your Own and sensitivity in Drive You Home, but History, released as their epitaph,  is a masterpiece. A string intro is followed by Ashcroft’s now-familiar crooning delivery for one of the decade’s standout singles. After this the album reaches a spectacular climax, with the majesty of Stormy Clouds and Reprise almost taunting those late to The Verve’s party. Thankfully they would give the band the recognition it deserved just a couple of years later.

The Manic Street Preachers – Everything Must Go – released May 1996

Originally I fully intended to include the Manics’ Holy Bible in this list – an album that I regularly refer to. However, it’s not an easy listen, to say the least, and a reappraisal of Everything Must Go changed my mind. Released after chief lyricist Richey Edwards went missing – he’s never been found – the remaining trio scaled back their outrageous image and returned with a more reflective piece, but one that still rages against the world, if in a slightly more mainstream manner. It featured the defining single A Design for Life in addition to a selection of anthemic and thought-provoking songs. Almost all of them are powered by singer James Dean Bradfield’s joyous guitar. When it’s absent in Edwards-penned Small Black Flowers That Grow in the Sky, there’s a poignancy to the track, accentuated by the string accompaniment. This seminal work also features one of the best closing tracks to an LP in No Surface All Feeling, which just makes you want to flip the record over and start again.

A firm fixture in top five albums of all time, OK Computer marked a change in Radiohead’s sound from guitar-heavy indie to progressive space rock. Little did anyone know what was to follow, and this LP is now seen as one of their most conventional works. Lead single Paranoid Android is one of the more unusual efforts to grace the charts, recalling 1970s multi-structured songs, but it’s one that never tires. There’s stadium chest-beating, introspection, and rage along the way, but it’s the later tracks that form one of the best features of this work. No Surprises, another unusual listen for Top 40 fans, features Thom Yorke crooning about a more peaceful and sterile existence, and is followed by Lucky, premiered on the mid-90s Help War Child project. Reminiscent of Pink Floyd in their pomp, it’s an epic piece that still stuns during the band’s live shows.

Alongside OK Computer (released on the same day) and the Verve’s comeback album Urban Hymns, Spiritualized’s masterpiece almost sonically records the comedown from the Britpop party. Best played on a Sunday morning, it originally came packaged in a pill-style blister pack, housed in a box that even had listening instructions. This turns out to be highly-appropriate as it’s almost medicinal listening, starting with the blissed-out title track before heading into the more unsettling Come Together. No worries, however, as the mood settles back for the delusional I Think I’m in Love, and despite frequent bursts of energy, such as on Electricity, there’s a relaxed and trippy, yet compelling feel to the whole affair. A late highlight is Broken Heart, which pretty much does what it suggests, whilst 17-minute closer Cop Shoot Cop features New Orleans legend Dr John.

Another dilemma for me, this one. Scottish band Teenage Fanclub released three great albums in the 1990s, and it was a hard decision to choose this one or predecessor Grand Prix, often quoted as their finest. Whilst this featured a storming A-side, with many of their best songs, as a whole, Songs from Northern Britain works for me. Once again it’s more relaxed, befitting the times, as marriage and children entered the band members’ lives. The LP begins with joyous harmonious guitar-led tunes Start Again, Ain’t That Enough, I Can’t Feel My Soul and I Don’t Want Control of You before Planets controls the mood a little. This doesn’t halt the momentum, however, and subsequent songs, leading up to closer Speed of Light add up to a satisfying, yet all too brief collection.

Charity’s Record Bid For Most Blood Donations In A Day