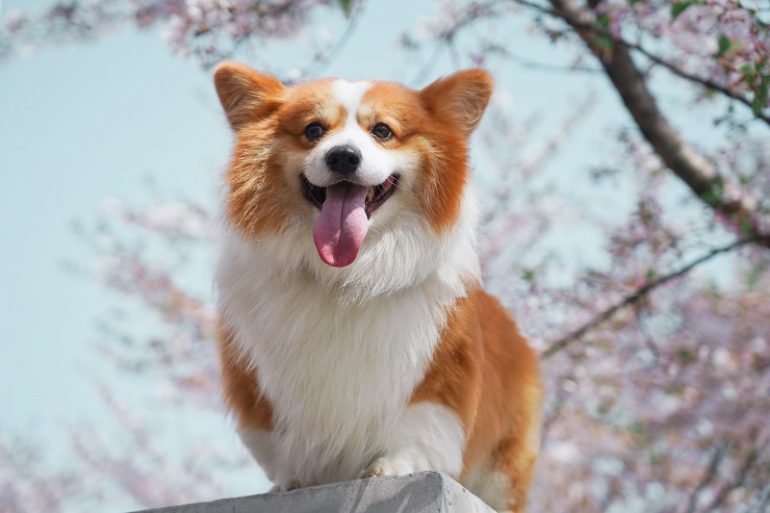 The cartoon image of the happy looking dog – the Queen’s favourite breed – first appeared on the monarchy’s official Twitter account last week with the message: “Meet PJ the corgi, our Jubilee emoji!”

Sporting a platinum and purple crown to match the official colours of the Jubilee, PJ, with his tongue sticking out, will appear automatically on Twitter when users include celebratory Jubilee hashtags.

PJ was revealed ahead of the celebrations to mark the Jubilee over the bank holiday, beginning on Thursday, June 2.

The royal family’s Twitter account added: “PJ will appear whenever you use #PlatinumJubilee #HM70 #PlatinumPartyatthePalace #PlatinumJubileePageant or #TheBigJubileeLunch and we’re hoping that as many of you as possible will use PJ to help celebrate the Jubilee here on Twitter.”

Prince Charles and Camilla, Duchess of Cornwall’s Twitter page also made sure to welcome the cartoon corgi adding: “A warm and waggy-tailed welcome to PJ the corgi!” followed by a paw-print emoji.

The Queen has owned more than thirty corgis during her reign, most of which have been descendants of her first corgi, Susan, who was given to her on her 18th birthday in 1944. However, it was her father, King George VI, who introduced the first of the little dogs into the family with a corgi named Dookie in 1933.

The Queen’s senior dresser, Angela Kelly, revealed that the new puppies were a constant source of joy for the monarch during the lockdowns. In recognition of the Queen’s favourite pets, a pack of mischievous puppet corgis will be causing comical chaos on The Mall as part of the Jubilee Pageant to mark the finale of the bank holiday celebrations.

A special segment of the all-star pageant, entitled the Queen’s Favourites, will also include representations of the Queen’s other beloved animals including her childhood pony Peggy and favourite horses including her Royal Ascot Gold Cup winner Estimate.