Post Office has abandoned its familiar post-box red livery on several of its vans, which will be covered in all of the colours of the rainbow in celebration of Pride events this summer.

Visibly displaying its commitment towards diversity, the Post Office van liveries are in support of the LGBT+ community’s Pride celebrations. 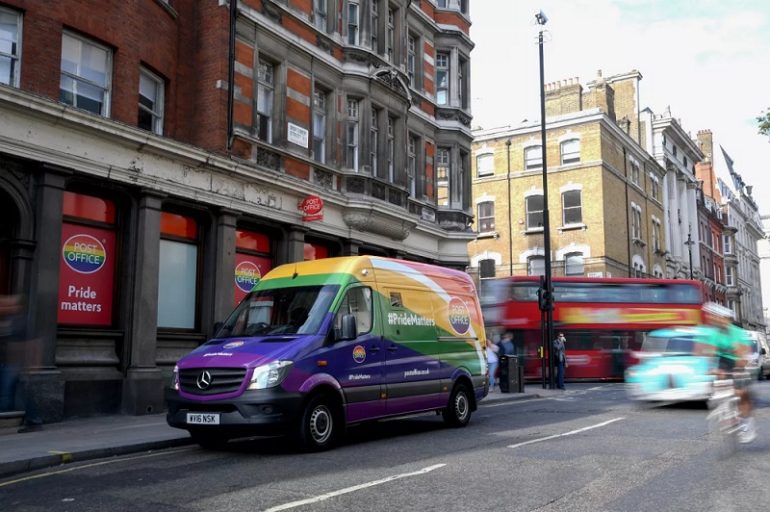 There are more than 100 Pride events in the UK this summer in addition to those taking place in over 65 countries. Post Office will also be participating in London’s early July event as well as sponsoring similar celebrations in Chesterfield on 22 July and Bolton on 21 September, where Post Office support centres are based.

The special vans belong to the Post Office supply chain and are used to help move stock around the country. Post Office also has its own internal LGBT+ support network called Prism, which has led the way in terms of this participation. In addition, Post Office support centres have been suitably decorated as well as the Great Portland Street Post Office branch.

Ben Spencer-White, Chair of Prism at Post Office, said: “As a business, we want to make sure we truly represent the breadth of customers and communities we serve – and we know that Pride matters to so many of them.

“Pride also matters to our own people; and at the Post Office, we want everyone to feel empowered to be entirely themselves at work. We’re incredibly excited to be taking part in Pride for the first time this year, celebrating difference and diversity across the UK – I am sure this is just the first year of many!”

The vans were wrapped by Stewart Signs, based in Eastleigh, Hampshire. In 2017, they branded more than 17,000 vehicles; but this is the first they’ve done in Pride livery.

James Harris, Commercial Director at Stewart Signs Limited, said: “Stewart Signs is delighted to support The Post Office with this year’s Pride campaign. It’s the first time we’ve wrapped a van with the pride flag, the results really make an impact and carry an important message. We look forward to seeing it on the road throughout the summer.”