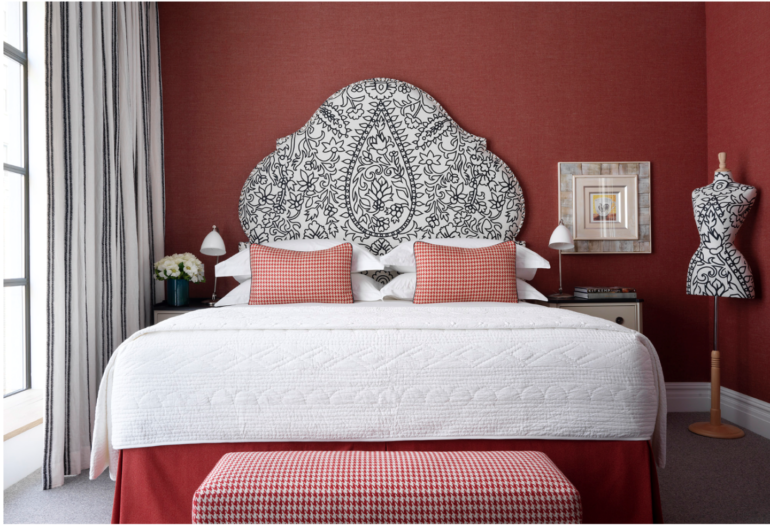 ‘Crazy Paisley’ fabric as seen in the Firmdale Hotel

Bespoke luxury textile studio Vanderhurd announces the launch of its new fabric collection for Spring/Summer 2018, ‘Crazy Paisley’. Inspired by the traditional paisley design, the print was formed through a process of simplifying and rescaling the iconic elaborate, intricate pattern. Printed on 100% high quality linen, the bold collection is available in four dynamic colourways.

The Crazy Paisley collection, designed by Founder and Creative Director Christine Van Der Hurd, evolved out of a previous project made through the studio’s bespoke service. The project saw the studio take a traditional Kashmir woven paisley shawl and create the design for a bespoke carpet. Returning to the design years later, Christine sought to modernise and elevate the pattern whilst maintaining the textile maker’s sophisticated aesthetic. Having formally used only a lighter linen, for this range of embroidered fabric Vanderhurd has now used a heavier woven linen highlighting further the textures within the design.

In a departure from the studio’s signature use of abundant colour, the monchrome colourway reveals to an honest self-assurance in the expert handling of pattern. While the monochrome holds firm as a flat print, the colourful fabrics feature delicate hand embroidery with large French knots and a heavy kantha stitch. The bold slightly irregular lines give the design a naive quality, evoking the stylistic brush strokes by the artist Henri Matisse.

In a nod to the studio’s playful use of colour and pattern, the design is also available in a variety of vibrant palettes; Very Cherry, Carnival and Petrol Azure. 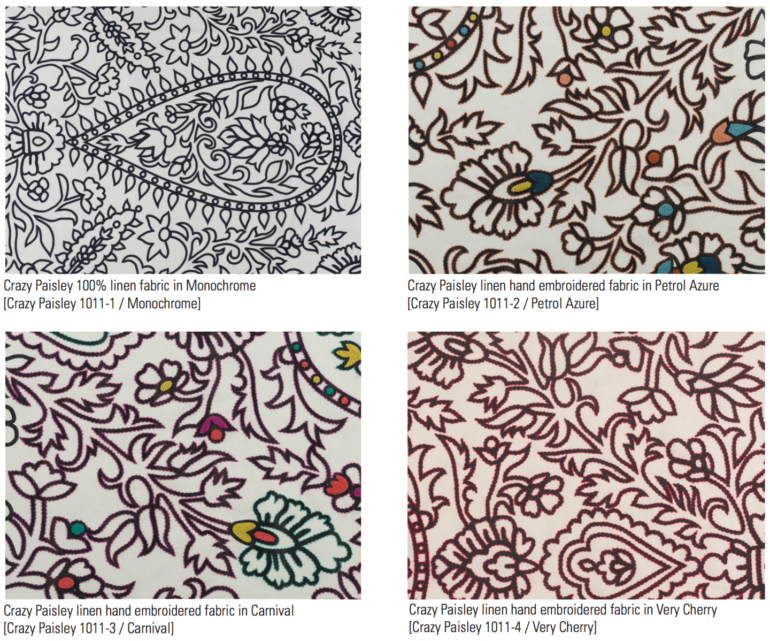 Internationally acclaimed design studio, Vanderhurd, has been designing and creating bespoke rugs, carpets and textiles for customers for over 36 years. Working from studios in London’s Portobello Road and New York City’s Crosby Street, and with representation in Los Angeles, Paris, Singapore and Sydney, the company works closely with interior designers to create custom textiles and area rugs for private and public spaces.

Recent projects include collaborations with the interior designers Suzy Hoodless, for the Television Centre in White City, London and Kit Kemp of Firmdale Hotels for The Whitby Hotel in New York. Forthcoming projects include work- ing with Thorp Design on the conversion of the King’s Chapel in London’s Fulham Road.

Vanderhurd is recognised today for its innovative and research-oriented approach to design. It prides itself on its inherent understanding of the art of weaving and while working closely with its artisans develops new techniques, qualities and innovations that allow this ancient art to evolve into contemporary design.

The company evolved from the inspired designs of its Founder Christine Van Der Hurd. On graduating from Win- chester Art College in the early 1970s, Christine worked for Etro, Osborne & Little, for Yves Saint Laurent, and with Angelo Donghia and Jack Lenor Larsen in New York City. It was the creation of a bespoke rug in 1980 that brought about a pivotal shift, and the design studio was born.

Do you Think Scarves are Cute?

How to Almost Double your Annual Leave Entitlement in 2021