The Zoe Ball Listening Garden, designed by James Alexander Sinclair, is new to RHS Chelsea Flower Show 2017. Sonic bass sounds from beneath the ground will reverberate through your body in The Listening Garden, one of five new gardens. 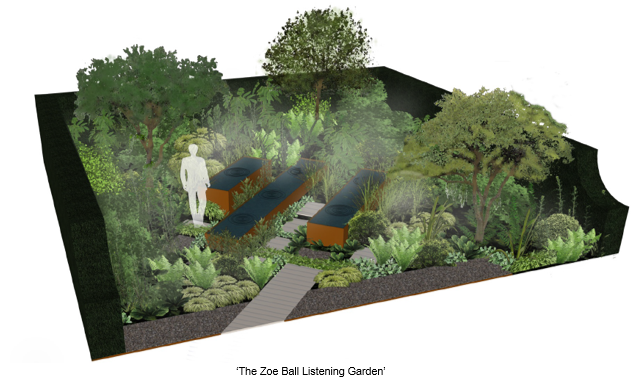 The Listening Garden, designed by writer, broadcaster and designer, James Alexander Sinclair, will feature three long water troughs with large steel trays full of gravel. As the bass plays beneath the ground, patterns will emerge on the surface of the water and the gravel will dance to the vibrations.

Lush green planting will feature throughout the garden including three trees and a 1.8 metre high perimeter hedge.

BBC Radio 2 presenter, Zoe Ball will join James on the garden and during build-up, to help with planting.
Zoe says: “I’m absolutely thrilled to be involved in such a delightful project at the RHS Chelsea Flower Show. I appreciate time out from busy days by escaping into the garden or the countryside, amongst the flowers and the wildlife, the smells and sounds. So what an absolute treat to work with James on the listening garden.
“Music has always been so important in my life and in my work. His plans to have the music vibrate through the garden is really inspirational and rather electric. Can’t wait for people to come feel and hear and smell and have their sensations truly tantalised in something fabulously unique – and I’m also looking forward to picking up some gardening ideas!!”

James says: “You know that feeling when you stand too close to a speaker stack at a concert? You can feel the music through your whole body – big grumbling bass notes that make your teeth rattle and your innards jiggle. That is the flavour that we are trying to reproduce in this garden which of course will be lushly planted with many shades of green and foliage textures.

“The general idea is to create something slightly other worldly to complement the strange sonic effects.”

The Zoe Ball Listening Garden is one of the five ‘Radio 2 Feel Good Gardens’, which are celebrating BBC Radio 2’s fiftieth anniversary and are named after different BBC Radio 2 Presenters.

Sustainable Gardening Guide: How to Create an Ecologically Diverse Garden