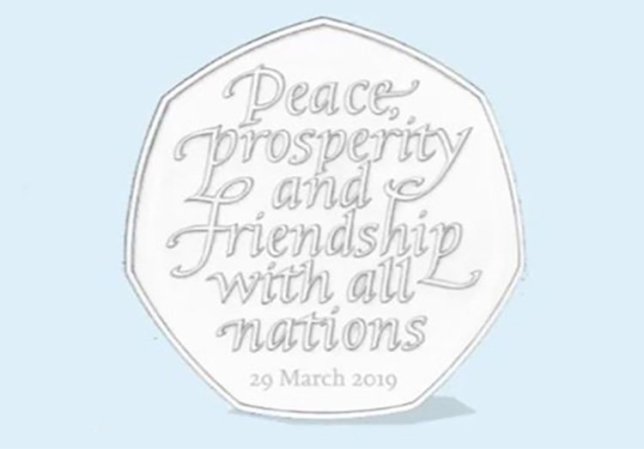 In October last year Mr Hammond announced plans for around 10,000 Brexit coins to be sold to collectors. However, the UK delayed its departure from the EU and only test coins were produced. In a move to show the government’s commitment to quitting the EU by November Chancellor Javid is said to be planning millions of 50p coins featuring the words “peace, prosperity and friendship with all nations”.

Sajid Javid has asked officials to look at whether it will be possible to produce a large volume of the coins ready for the UK’s scheduled EU leaving date of October 31st. But the plans will have to be signed off by the Queen’s Privy Council of ministers and they’re not due to meet again until October, which could put a stop to the coins being minted.

The Royal Mint has a collection of ‘Coins by Occasion’ and the use of the 50p coin regarding the EU is not new. When the UK joined the European Economic Community in 1973 a commemorative coin featuring 9 hands joined in a circle was released and again in 1998 when the UK held the presidency of the EU, this time featuring twelve stars designed by John Mills.

This year is gearing up to be an interesting October, not only is Brexit a flexible date but so might Halloween itself be. Campaigners have been petitioning to get Halloween moved from October 31st, which this year falls on a Thursday, to become the last Saturday in October. The motivation behind this is to allow parents to take their kids trick-or-treating.