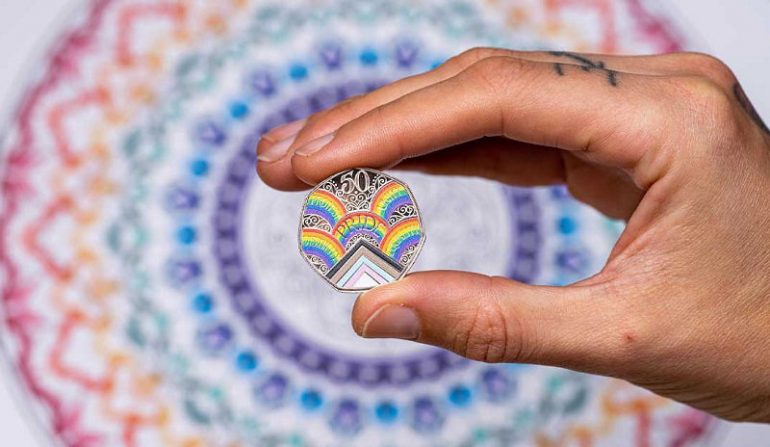 A brand new design of the 50p coin has been launched to celebrate fifty years of Pride UK – and the design could be worth a lot more than face value to collectors in years to come.

The Royal Mint frequently issues rare commemorative coins, and some collectors are willing to pay hundreds of pounds to get their hands on the rarest copies. In recent years, the Kew Gardens 50p, or any coins from the coveted 2012 Olympics set, are just two of the coins that collectors are keen to add to their haul.

Nicola Howell, chief commercial officer at The Royal Mint said: “The design is a fitting tribute to the legacy of Pride UK, and we know how excited collectors will be to find one in their change.”

The coin design features five rainbows, each accompanied with part of the inscription, “Protest, Visibility, Unity, and Equality – Pride London’s values – on the reverse of the coin.

New state-of-the-art colour printing technology means that the iconic colours of the Pride progression flag could be recreated on special-edition versions of the uncirculated coins, which can be purchased at The Royal Mint website for £18.

The new design will enter circulation later this year, with five million copies cropping up in change across the country.

In comparison, there are an estimated 948 million regular 50p coins in circulation, so the design will be rare. So, if you’re lucky enough to receive one in your change you might be able to sell it on, via auction websites like eBay.

While it may not command as much as the technicolour design, the rare print is still likely to be a hit with collectors. It will be the first UK 50p coin issued representing the LGBTQ+ community, and the experts at Change Checker say that previous “UK firsts” have made a great splash in the past.

“50p coins have been incredibly popular, so we are anticipating the Pride 50p to be in high demand with collectors,” said the cash experts.

A spokesperson from The Royal Mint said: “Coin collecting remains a very popular hobby in Britain and people take a lot of enjoyment from finding ‘special’ designs in their change.

“Due to the significance of the 50th Anniversary of Pride, we expect many people who find a Pride 50p will add it to their coin collection or retain it as a keepsake.”