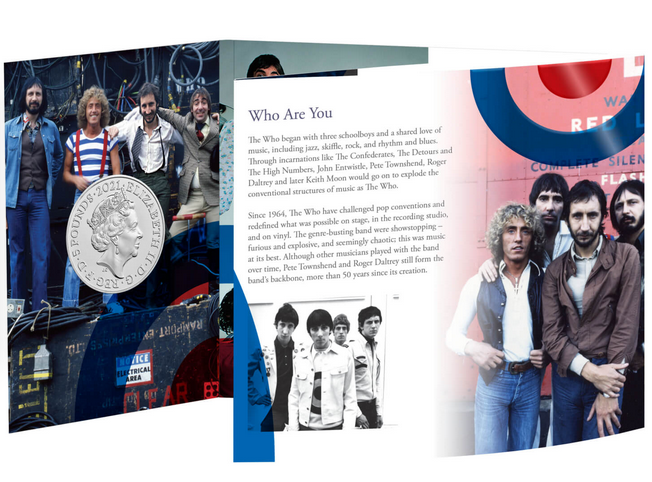 The Royal Mint has launched a new commemorative coin to celebrate the legendary English rock band, The Who.

Formed in the 1970s, the band’s incredible career has spanned over fifty years, and the new coin designed by artist Henry Gray, celebrates iconic symbols such as a Mod logo, Union flag and guitarist Pete Townshend’s Rickenbacker guitar. Together, the design forms a pinball machine in a tribute to one of the band’s most famous songs, Pinball Wizard.

The coin forms part of the  Royal Mint’s Music Legends Series, which already includes coins minted in honour of Queen, Sir Elton John and David Bowie. Using advanced colour printing technology, elements of the coin have been digitally printed in red, white and blue and some feature a “shockwave” effect, radiating from the speaker.

Co-founder and lead singer of The Who, Roger Daltrey, visited the Mint to strike one of the first coins and said: “It’s an honour to have a coin produced to celebrate The Who’s musical legacy.

“The coin’s design captures the true essence of the band and what we represent.

“It was a fantastic moment being able to strike one of the very first pieces in the collection and see the range of technologies and processes involved in the making of the coin.”

Clare MacLennan, divisional director of commemorative coin at the Royal Mint added: “The Who are an iconic British band with an incredible musical legacy, so it felt right to honour them with an official UK coin.

“The Who coin is the latest in our show-stopping music legends series, which celebrates legendary British artists through original new designs.

“It was a privilege to have Roger Daltrey visit the Mint to strike one of the first coins and meet the team of makers that have created this wonderful design. Our music legends series is engaging new generations of coin collectors, and we hope this design will become a cherished part of fans’ memorabilia.”

The coin is available to purchase from the Royal Mint online, and collectors can choose from a limited-edition precious metal version or a brilliant uncirculated £5 coin priced at £22.50.  Fans can also splash out on a one-ounce gold proof coin priced at £2,315.