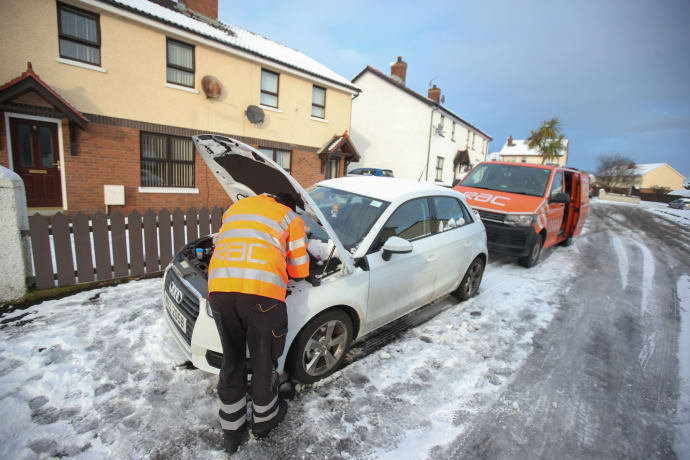 With bitterly-cold temperatures affecting the whole of the UK and a risk of snow for some, it has been revealed that a majority of drivers do not carry out basic checks on their car such as oil level and tyre condition as often as they should – potentially increasing the chance of a freezing breakdown at the side of the road, or worse.

Research conducted by the RAC* among 2,000 motorists found that more than a third (38%) said they check their car’s oil at best every two months with 7% saying they wait until a warning light comes on before they do anything – despite too little oil risking causing dangerous and expensive engine damage. Less than a quarter (24%) check their oil as often as the RAC recommends, which is at the least every two weeks and before long journeys.

When it comes to tyres, a car’s only contact with the road, things are no better. Fifty-eight per cent check the condition of their vehicle’s tyres – including tread levels – at least once a month, with the RAC advising rubber is looked at least this often and possibly even more frequently in case of damage from potholes, and prior to long road trips. But 37% do it at best once every two months, and at worst less than once a year. Tyres that are damaged or are low on tread can make driving extremely unsafe, especially on icy and snowy roads.

It is a similar picture with tyre pressure – unless a car is fitted with a pressure monitoring system, tyres should be checked every fortnight and before long journeys. But only a third of respondents (32%) checked them that often, with a similar number (29%) doing it once a month and a fifth (18%) leaving it until at best every three months, and at worst less than once a year. Correctly inflated tyres can reduce the chance of a blow-out and significantly improves fuel efficiency.

But it is the other form of rubber on vehicles – windscreen wipers – that appear to be most neglected despite the crucial job they do in keeping a driver’s view clear, especially when the weather is cold and roads much dirtier. While a third of respondents (33%) look at them at least monthly, a remarkable 30% said that they wait until the wipers stop clearing the windscreen properly before checking them. This represents a genuine road safety risk as drivers are unlikely to carry spare wiper blades in the car should one fail.

While the days are getting longer, it’s also vital drivers are visible in low light – especially with some significant snowfall due over the next few days in some places. Less than a third of drivers (30%) check their lights at the RAC’s suggested weekly interval, with a quarter (24%) doing it every three months at best.

The other vital thing to check under the bonnet is the level of engine coolant. Modern vehicles should not need topping up between services, but a drop in the level of coolant could indicate a problem and lead to engine overheating. Only 26% of drivers said they looked at the coolant level at the recommended interval of every two weeks, with 24% checking it every month and the remainder checking it less frequently or even waiting for a warning light to appear on the dashboard.

With very low temperatures forecast over the coming days, even during the daytime, the RAC is strongly recommending drivers take a small amount of time to ensure their car is prepared for winter and less likely to let them down.

RAC patrol of the year Chris Burgess said: “While there are no hard-and-fast rules on exactly how often drivers should check basic things like oil, windscreen wipers and tyres, our research suggests a sizeable proportion are chancing it and hoping their car won’t fail them – which is a worry given the current sub-zero temperatures.

“The prolonged cold snap now gripping the country means that the risks of vehicles breaking down increases significantly. During the snowy conditions in December we saw breakdown volumes increase by around a fifth (20%) in some parts of the country so it really does pay to make sure your car is prepared before setting out.

“Checking things like tyres, oil, coolant and wipers takes little time – and can often be simple and reasonably cheap to sort out. The risks of not checking things and getting them fixed or topped up is potentially disastrous – at worst, you could be risking an accident or breakdown in freezing conditions, and at best you’re storing up problems that could prove to be very expensive in the long run.

“While some drivers might think we suggest overly frequent checks of things like oil, coolant and tyres, it is definitely a case of being ‘better safe than sorry’. By erring on the side of caution and keeping a close eye on the condition of your car, you are much less likely to run into problems.

“In the current very cold weather we also ask drivers to think about friends and family who drive, and to pass on the message that taking just a little bit of time to check over things on their car can make the difference between a safe and trouble-free journey and a cold wait at the side of the road.”

Why not check out our Winter Driving Tips or visit https://www.rac.co.uk/ for more information about how to keep safe this winter.