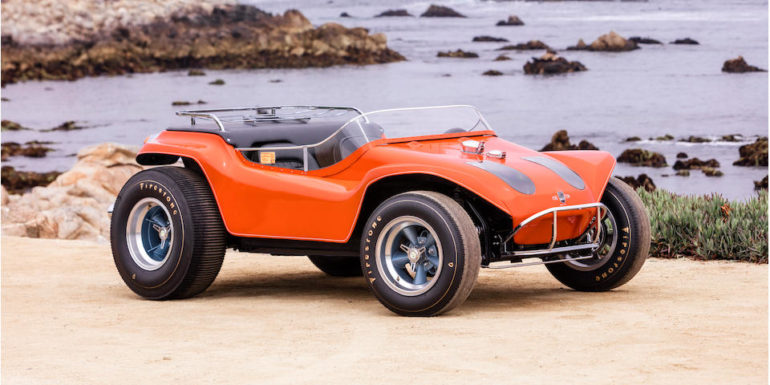 The very car in which Steve McQueen took Faye Dunaway on an exhilarating, white-knuckled ride in the 1968 movie The Thomas Crown Affair will be auctioned by Bonhams at the annual Amelia Island, Florida auction next March.

Like the car chase on the streets of San Francisco in Bullitt, the ride on the beach of Massachusetts in Thomas Crown is the stuff of legend. The Hollywood film captivated global audiences and brought the Meyers Manx – the first true “dune buggy” – to the attention of the world. Not only that, but the movie reaffirmed McQueen’s affinity for and capability in motoring, as well as helped catapult the talented and beautiful Dunaway to A-list stardom. To simply say this movie influenced popular culture would be a gross understatement indeed.

The Meyers Manx was the embodiment of the California lifestyle – sun, sand, sea and free livin’ – all in a compact, open-air, go-anywhere fun mobile. McQueen’s love for cars and bikes was already well established and it was his influence that brought this distinctly American vehicle into the film directed by Norman Jewison.

Unlike any other Manx, however, McQueen enlisted the help of motor legend Pete Condos of Con-Ferr fame to build a completely customized and totally unique vehicle. In a period documentary about the movie, McQueen said, “Crown lives at the beach and he has a dune buggy. I helped them design it, so I’m kinda proud of that. It’s set on a Volkswagen chassis with big ol’ wide weenies – big wide tires on mag wheels, Corvair engine stuffed in the back…It’s very light, you know (because of the fiberglass body). It’s pulling about 230 horses and weighs about a thousand pounds.”

This iconic, singular and world-famous dune buggy that McQueen helped design and then masterfully drove with no stunt double, will be offered for sale alongside Steve McQueen’s personal 1949 Chevy 3100 Pickup Truck. For more information Bonhams.com/Quail.