The Midlands-based manufacturer debuted an electric E-Type concept car late last year. Following an overwhelmingly positive reaction, and the car’s starring role in the recent Royal Wedding, the classic is set to be reborn more than half a century after it was originally unveiled to a stunned world. 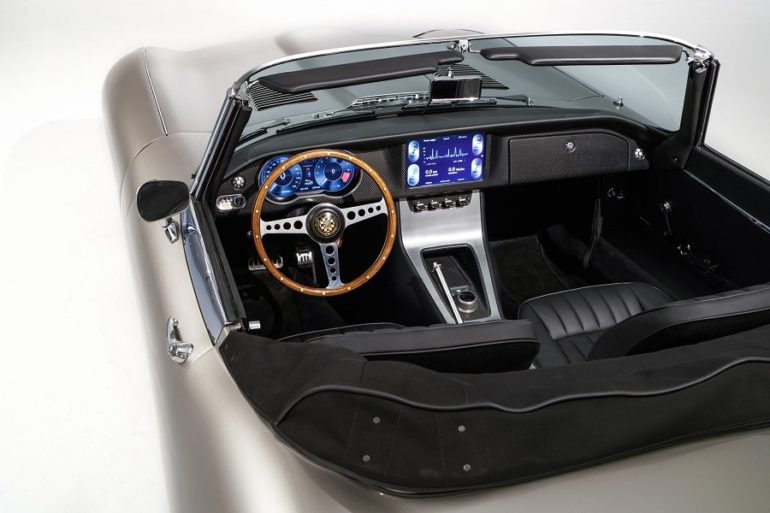 The new E-Type Zero combines expertise from Jaguar’s restoration division as well as cutting-edge technology from the new I-PACE, the company’s first electric vehicle. Jaguar Classic will offer both tailor-made E-Types restored and converted to the new power units and an EV conversion service for existing owners. To preserve authenticity the conversion will be fully reversible.

The Jaguar E-type Zero concept offered quicker acceleration than the original Series 1 E-Type, with a range in excess of 170 miles from its 40kWh battery, which can be recharged in around six hours. The car’s interior also received a 21st Century upgrade, with modified instrumentation featuring a touchscreen, and the headlights were updated to LED technology.

The I-PACE-derived electric powertrain lies just behind the battery pack, in place of the E-type’s gearbox. Similar weight and dimensions to the outgoing petrol engine and transmission means that the car’s structure, including suspension and brakes, has not changed, simplifying the conversion and keeping the driving experience in line with the original vehicle. Jaguar claims that it drives, handles, rides and brakes like an original E-type with front-rear weight distribution unchanged.

The latest iteration of the E-type Zero concept, finished in a Bespoke Bronze paint finish, will give the car its US debut at The Quail: A Motorsports Gathering on Friday 24 August.

“E-type Zero showcases the incredible heritage of the E-type, and the expertise and craftsmanship at Classic Works, while demonstrating Jaguar Land Rover’s dedication to creating zero emission vehicles across every part of the business, including Jaguar Classic.”

Jaguar Classic has said that technical specifications and pricing details will follow, but the company is now taking expressions of interest from potential E-type Zero clients. Deliveries of the first electric E-type vehicles are expected to start from summer 2020.