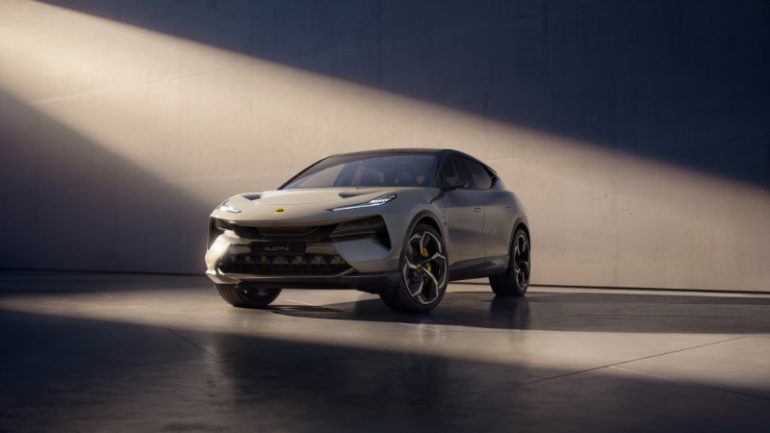 Lotus has unveiled the prices and specifications for one of the most eagerly anticipated models in its history – the award-winning Eletre Hyper-SUV. The news was delivered during Lotus Eletre: Unleash the Future, a global broadcast watched by tens of thousands of customers and fans around the world.

The Eletre is the all-new and all-electric lifestyle model from Lotus, as it continues its transformation from a UK sports car company to a global performance car business and brand.

It is the first of a new breed of pure electric SUVs. It takes the core principles and Lotus DNA from almost 75 years of sports car design and engineering, evolving them into a desirable all-new lifestyle car for the next generation of Lotus customers.

The company’s famed expertise in the fields of ride and handling, steering and optimised aerodynamics, have been carefully and respectfully evolved. The Eletre takes the soul of the latest Lotus sports car – the Emira – and the revolutionary aero performance of the all-electric Evija hypercar, and reinterprets them as a Hyper-SUV.

With a world premiere in London in March this year, the Eletre is ‘Born British, Raised Globally’, a collaboration between highly experienced and dedicated Lotus teams in the UK, Germany and China. They include the product definition and attributes teams at Hethel, the home of Lotus since 1966; the design teams at Lotus Tech Creative Centre (LTCC) in Coventry; the engineering teams at Lotus Tech Innovation Centre (LTIC) in Raunheim; and the Lotus Tech engineering and manufacturing teams in Wuhan.

Matt Windle, Group Vice-President and Managing Director, Lotus Cars, commented: “Confirmation of the pricing and specs of the Lotus Eletre is a key moment in the transformation of Lotus through our Vision80 strategy. We know from media and customer feedback that they’re hugely excited by the arrival of this car – indeed, the Eletre has already won awards as 2023’s ‘most excited to see’ new model. Customer deliveries start during the first half of next year.”

He added: “The launch of the Eletre is the natural next step for Lotus. Two-seater sports cars are not for everyone, and we want to offer a Lotus for every stage of your life. The Eletre is the start of that.” 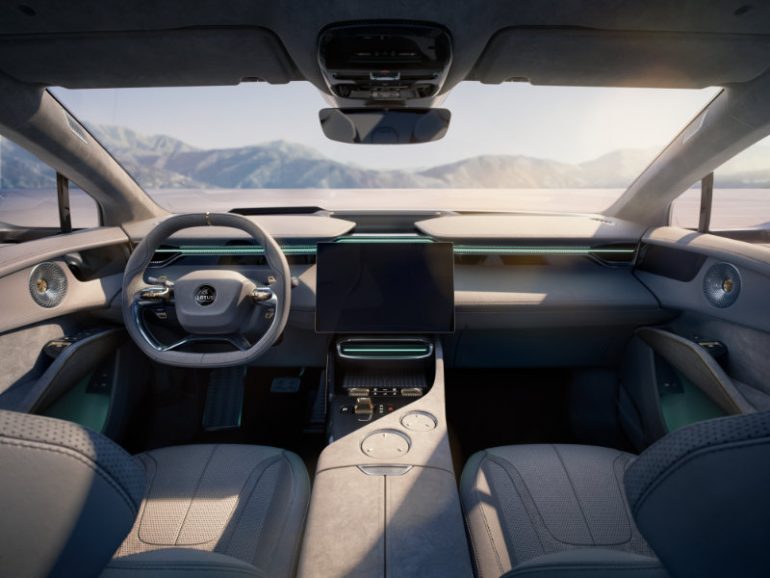 As part of the Unleash the Future global news broadcast, key Lotus personnel explained the company is embarking on an ambitious future based on three key pillars – Life, Tech and Speed. They also previewed how the world’s first Hyper-SUV, the Eletre, measures up against the original Lotus EV hypercar, the Evija.

The platform includes ECARX’s first dual-chip system to enable server-level computing power for rapid processing and smooth rendering. The resulting immersive multi-screen user experience can be continuously improved during the lifetime of the car via future Over-The-Air (OTA) updates.

Lotus has also revealed it is partnering with HERE Technologies to deliver integrated navigation services for the Eletre. The service includes EV Routing, EV Range Assistant and Predictive Routing, and can be updated via OTA updates.

Lotus also announced a new collaboration with Dolby, creator of the renowned immersive audio experience Dolby Atmos. Dolby Atmos is a new way to enjoy music that takes listening to new heights through unparalleled depth, precision and clarity. Together, Dolby Atmos and the Eletre’s KEF speaker system combine to elevate music listening to new levels. Driver and passengers will feel like they’re sitting in the middle of the recording studio alongside the artist. The Eletre is the world’s first car to combine Dolby Atmos and KEF Audio.

The premium cabin takes Lotus interiors to an all-new level of desirability. As standard the Eletre comes with wireless smartphone charging, 12-way electrically adjustable front seats, four-zone automatic climate control and many other features. The ‘intelligent cockpit’ infotainment system, which includes Apple CarPlay / Android Auto and a 1,380-watt, 15-speaker KEF Premium Audio, is operated via a centrally mounted 15.1-inch full High-Definition OLED centre screen. All versions of the Eletre feature five seats as standard, with a four-seat version available as part of the Executive Seat Pack. 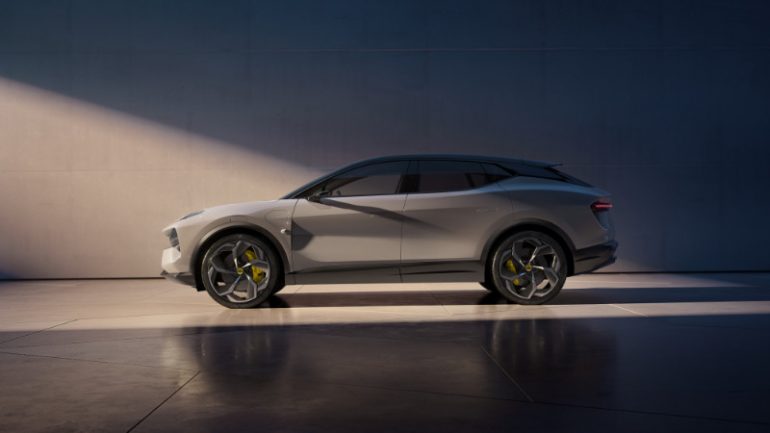 In the UK the Eletre rides on 22-inch wheels as standard, though 20-inch and 23-inch are available. There are five different wheel designs and six colours of brake caliper. At launch there are six exterior colours to choose from – Natron Red, Galloway Green, Stellar Black, Kaimu Grey, Blossom Grey and Solar Yellow. More will follow later.

Six unique interiors are available, all offering premium high-grade materials and detail choices. Sustainability has been at the heart of the development. For example, the Eletre is available with a state-of-the-art alternative to leather that is environmentally friendly, odour-free, and lasts longer than genuine leather. In addition, a new man-made fibre has been used in the carpets and boot liner. It is 100% recycled and 100% recyclable, and there is no waste in the production process. 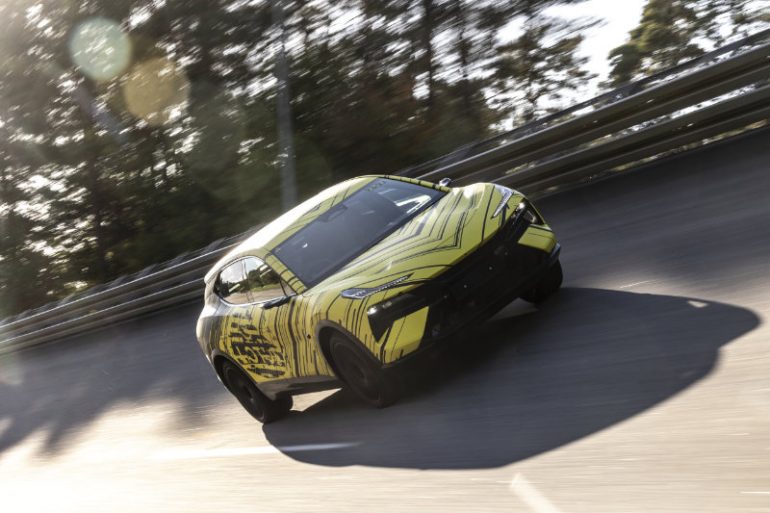 During the Unleash the Future broadcast Lotus revealed how the car has been testing on the Nürburgring, which is just two hours’ drive from LTIC. Maximilian Szwaj, Vice-President of Lotus Technology and Managing Director, LTIC, explained: “The Nürburgring circuit is very challenging, and we are proving with our tests there and our simulations that we will achieve the performance targets we have set for the Eletre.”

He also revealed that Lotus is working on advanced technology which will ultimately allow customers to drive the Nürburgring circuit autonomously. It means they can experience the thrilling driving performance and dynamic capability of a Lotus from the driving seat supported by AD technology.

The experiences from the Nürburgring have been implemented into the Eletre with Track Mode, which is exclusive to the Eletre R and part of its standard specification. Compared with other versions, it provides a lowered ride height, and more performance-oriented settings for the dampers and anti-roll control. It delivers a higher level of dynamic performance at longitudinal and lateral limits for the most ambitious drivers. Track mode also includes a fully open active grille and a launch control with instant access to the car’s full power.

As part of Unleash the Future, Gavan Kershaw, Director, Product Definition and Attributes, Lotus, spent a day on the test track at Dudenhofen, also close to LTIC. Gavan commented: “The Eletre is truly a global car with involvement from the best engineers around the world. The Dudenhofen test track is tight, twisty and undulating – like the perfect English B-road – and the Eletre is so enjoyable to drive, exactly like a Lotus should be. The Eletre is a true Lotus.”

In the UK the Lotus Eletre will come with a five-year / 100,000-mile vehicle warranty, plus five years of pan-European roadside assistance.

Pricing in eight key European markets is detailed in the table below, with launches in other countries in the region to follow. Plans for the arrival of the Eletre in North America, Middle East, Asia Pacific and other regions are well-advanced and roll-out will begin from 2024. Prices and specs for those will be revealed nearer the time.

During the Unleash the Future broadcast, Matt Windle revealed it isn’t just the Eletre which has been to the Nürburgring. The all-electric Evija hypercar has also been lapping the track, albeit via an advanced vehicle simulator. He commented: “Our simulations are showing us that the Evija is very quick. That’s exactly what they should show because the car is ultra-powerful, lightweight for an EV and it’s got incredible downforce. In terms of taking the car itself to the circuit, all I can say at the moment is watch this space.” 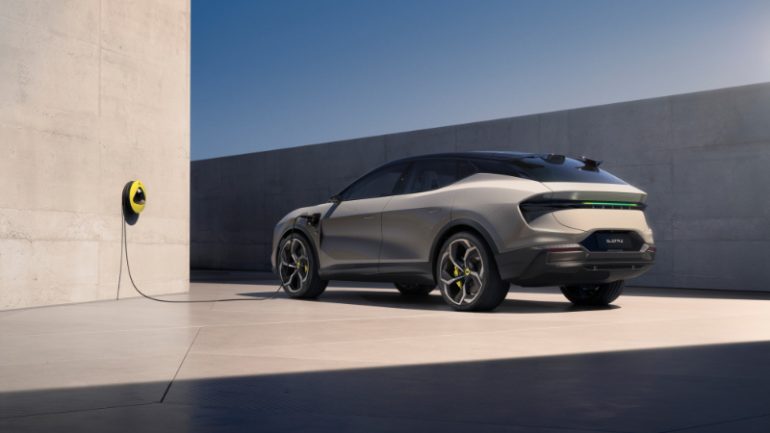 * Using 20-inch wheel, available as a no-cost option in the UK