You might want to hang up your car keys until February 1st, as January has been designated as the most dangerous month for UK drivers.

Analysis by Privilege Car Insurance has found that an average of 10,075 accidents occur each year on 16th January. That equates to a whopping seven collisions every minute and more bumps and shunts than on any other day of the year.

Privilege’s report advises: ‘Drivers should consider their safety more than usual today, as new research shows that the 16 January is the date when most traffic accidents are likely to take place.’

The insurance provider also found a rear collision is the most common type of accident to happen, and that Ford drivers are most at risk of a shunt from behind – a scenario that’s more likely to happen in either Manchester or Belfast.

Single vehicle accidents are the second most frequent collision type. This includes reversing into a lamppost or bollard or another driver hitting your vehicle when it is parked.

Privilege’s report also lists the top ten makes of vehicle that are most likely to suffer a bump:

Why are we crashing?

24% of respondents of Privilege’s study, reported that poor concentration was the biggest reason for an incident occurring, and insurers have spoken out and suggested drivers ‘need to take more breaks when driving, or when conditions deteriorate’.

The analysis doesn’t state how poor concentration has been defined, but the illegal use of a mobile phone whilst behind the wheel is a distraction which could cause catastrophic results, and not only result in serious injuries, but prosecution and an invalidation of insurance if mobile phone usage is a factor in causing an accident. Even simple tasks such as changing the radio station can break concentration and result in a crash.

Low visibility and bad weather followed poor concentration as the biggest factors for accidents, which is no surprise as January has fewer hours of daylight than most months and roads are often icy with foggy conditions.

Tiredness is another culprit. We’ve long been urged to take regular breaks when on a long journey or to stop for a coffee and get some fresh air, yet 10% of the survey’s respondents admitted that driving when tired is a major contributor to having a prang.

Passengers, especially children, are also a source of distraction, as is driving too fast or listening to loud music.

Factors blamed by respondents for causing an accident: 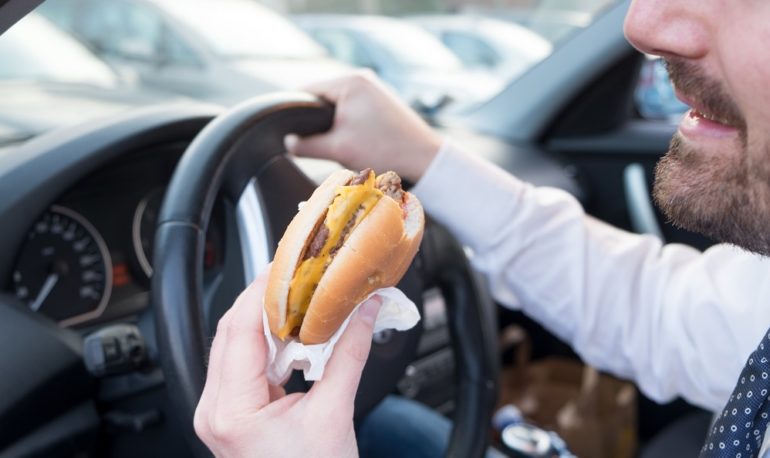 So, who is the safest driver?

Alarmingly, one in ten 18 to 34-year-olds who have been responsible for causing a smash, admitted they did so whilst applying make up at the wheel.  Drivers in this same age group also blamed eating or drinking in the driver’s seat as the cause of their accident.

It’s not just younger drivers who are at risk. Motorists in the over-55s age group seem to be the least focused on the roads, with almost a third of older drivers blaming poor concentration on their incident. It’s not all bad news for the over-55s though, as they are more speed aware and are the cause of fewer accidents where excess speed is involved.

It seems that women are the safer driver of the sexes, with just a 20% of females conceding they were at fault for a crash, weighed against 25% of men.  And females also come top when reversing as well, with over 75% saying they have never caused a collision when performing a reversing manoeuvre, compared to 60% of males.

The safest (and not so safe) places to be a motorist

Privilege’s analysis has found that drivers from Bristol are the UK’s safest drivers, with only 45% experiencing a shunt or bump on the country’s roads.

And it is bad news for motorists in the East Midlands, with almost a third of drivers divulging that they have been the cause of an incident on the road, making it the region with the worst record for at-fault collisions.

Belfast tops the table with 70% of motorists involved in a crash, with the following places almost as accident prone:

Head of Privilege Motor Insurance, Charlotte Fielding, provides some advice on measures to take to help us stay safe when travelling: ‘We know that January can be a tricky time of year for drivers.  ‘Difficult weather conditions, fewer daylight hours plus, being back to the grind after Christmas can take its toll, leaving drivers feeling fatigued. A few simple measures can reduce unnecessary stress levels and reduce the risk of collisions.’

‘Before you set off, ensure you have left enough time for your journey and if it is an unfamiliar route, programme this into your sat nav.  If you can, take 15-minute breaks every two hours on longer journeys and keep your distance from the car in front, as this will give you extra time to react.’