Taking place on Sunday 4 November, the Bonhams London to Brighton Veteran Car Run supported by Hiscox is famous throughout the world for bringing priceless antiques to life. Every autumn it draws entrants from across the globe and delights thousands of roadside viewers.

The 54-mile run is open to vehicles built before 1905, and every year since 1927 it has recalled the original 1896 Emancipation Run that celebrated the repeal of the Red Flag Act. In addition to cars from private collectors, many of the entries are provided by museums, and the event has ensured that these remain in working order.

“It’s a unique spectacle and brings notable exhibits from our collection to life,” enthuses Stephen Laing, curator of the British Motor Industry Heritage Trust. “We need events like this to keep the cars going and it provides us with a great opportunity to involve our key trustees and also to get the cars out in front of the public.” 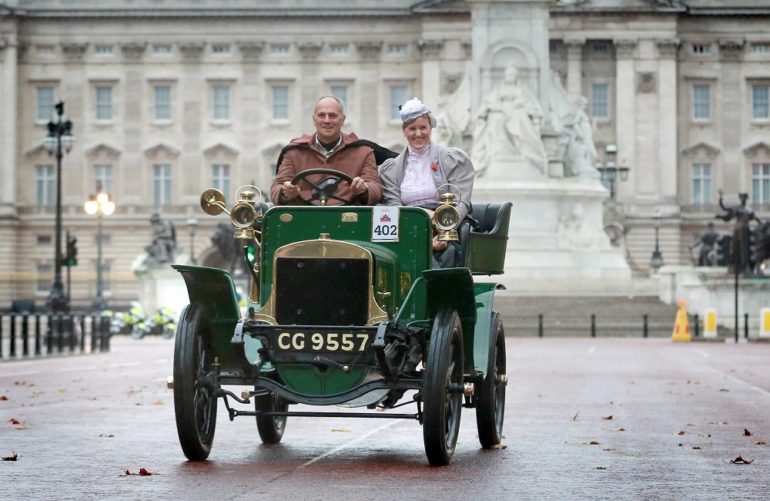 The Trust’s collection, based at the British Motor Museum in Gaydon, is the world’s largest display of historic British cars. Of the 300 they hold, eight are eligible for the run, with six regularly entered. In the past, celebrity drivers Damon Hill and Charley Boorman have taken to the wheel of a 1904 Rover 8hp, whilst Sir Steve Redgrave has tackled the event in a Thornycroft 20hp tonneau of the same vintage.

The National Motor Museum in Beaulieu also participates in the Veteran Car Run, with TV baker Paul Hollywood having previously driven its 1904 De Dion-Bouton. Perhaps the most famous car on the event, however, hails from the Netherlands’ Louwman Museum. Its Darracq was the star of 1953 movie Genevieve, which featured a plot based around the event.

Somerset’s Haynes Museum regularly fields a 1903 Darracq Type L, which was crewed by TV presenters Edd China and Mike Brewer in 2013, having undergone a light restoration for the TV programme Wheeler Dealers. Having missed last year’s event due to mechanical maladies, it will be back with Bronek Masojada, Chief Executive of Supporting Partner Hiscox Insurance at the wheel.

Masojada said: “The atmosphere and camaraderie of the run came to a head last year when our century old French beauty decided to take the day off. Despite test driving her just weeks before, it simply wasn’t to be.

“Having hitched a lift with a fellow veteran, I can vouch for how enjoyable the run is whether you’re behind the wheel or experiencing it as a passenger. That said, I’m hoping for a smoother ride to Brighton this time around and have no doubt the run will deliver yet another year of world-class motoring nostalgia.”

As in recent years, the Veteran Car Run completes a busy schedule for the Royal Automobile Club’s London Motor Week, which includes motoring-themed functions and events such as the free-to-view Regent Street Motor Show on the Saturday immediately before the Run.

On the preceding day, renowned auctioneer Bonhams will host a special Veteran Car Run sale with an evocative selection of veteran cars and related memorabilia coming under the hammer.

Full information on the Bonhams London to Brighton Veteran Car Run supported by Hiscox – including full details of how to enter or spectate – can be found on the official website: www.veterancarrun.com.