Legendary British sports car manufacturer Lotus marked its 70th anniversary with a VIP reception at the Goodwood Festival of Speed. The Duke of Richmond and Gordon, owner of the Goodwood estate, attended the festivities, which included champagne and birthday cake. 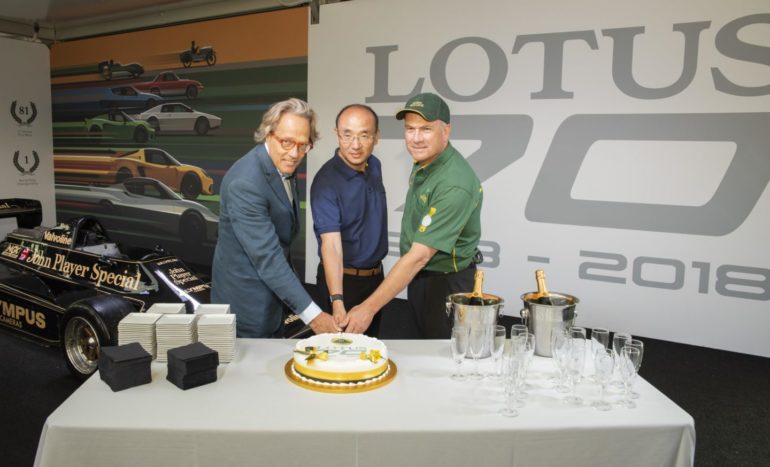 Lotus also had its current line-up of sports cars on display, including the Exige Type 79 special edition, built to celebrate Mario Andretti’s World Championship 40 years ago. The event has also partnered with the Jim Clark Trust, which is raising funds for a museum dedicated to the double World Champion.

Lotus’s 70th anniversary year is an important one for the marque, which was recently purchased by Chinese automotive giant Geely. The company, which has already turned around the fortunes of Volvo, has appointed Mr Qingfeng as CEO as it looks to build upon Lotus’s rich heritage.

Founded by Colin Chapman in 1948, Lotus began manufacturing road cars in the 1950s and entered Formula One at the end of the decade. Since then it has won the Drivers’ World Championship six times, seven Constructors’ titles, as well as the Indianapolis 500, and become a global sports car brand.

Speaking at the event Mr. Feng Qingfeng said: “Colin Chapman had a clear vision for how cars should be engineered and developed. Over the last seven decades we have innovated and influenced the development of sports cars. Colin Chapman’s philosophy of efficiency and effective car design is as relevant today as it was in 1948, and the next 70 years presents us with an amazing opportunity for the marque as it develops the market leading cars of the future.”

A New Tradition: The Annual UK-wide Clap to take place on July 5th