When you have the money anything is possible, as proven by Rolls-Royce recently when they fulfilled the dreams of a mysterious customer by creating an extravagant, one-off car for him – but can you call a creation that has reputedly cost him £10 million a mere car? That’s believed to be the highest-ever price for a new car.

As befits the image Rolls-Royce does not tend to discuss such vulgarities as the price of things, or even power outputs, but the ‘Sweptail’ (for that is its curious name) cannot have been cheap. The story began in 2013 when the company, based near the Goodwood race track, was approached by a long-term customer who had a vision to create an unique automotive masterpiece inspired by the coach built Rolls-Royces of the 1920’s and 1930’s. The customer also has a passion for super-yachts, both classic and modern and in his mind’s eye he wanted a two seater coupe with a large panoramic glass roof. Lengthy discussions between the customer and the design team led to the Sweptail. 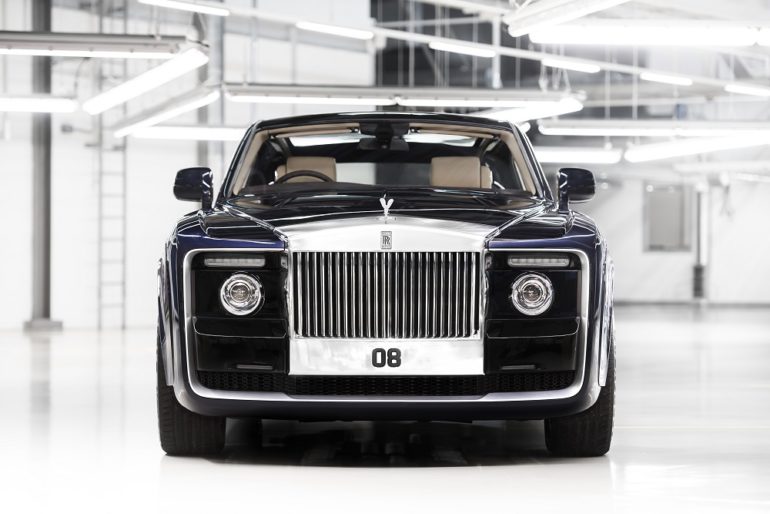 The result is the combination of a familiar Rolls-Royce front end with an imposing radiator grille, flowing all the way back to a tapering, raked stern styled to evoke the racing yachts that inspired the owner. The style differs markedly from front to rear and at least one designer we spoke to considers some aspects to be out of proportion. The roof tapers towards the centre of the car, culminating in a point, housing the central brake light whilst the bodywork sweeps back under the car in the style of a yacht tail, hence the ‘Sweptail’ tag. The ‘O8’ at the back is actually the cars’ registration, offering no clues to the owner. The digits were milled from aluminium and hand polished. There’s bound to be a class warrior plod somewhere who will take issue with that! 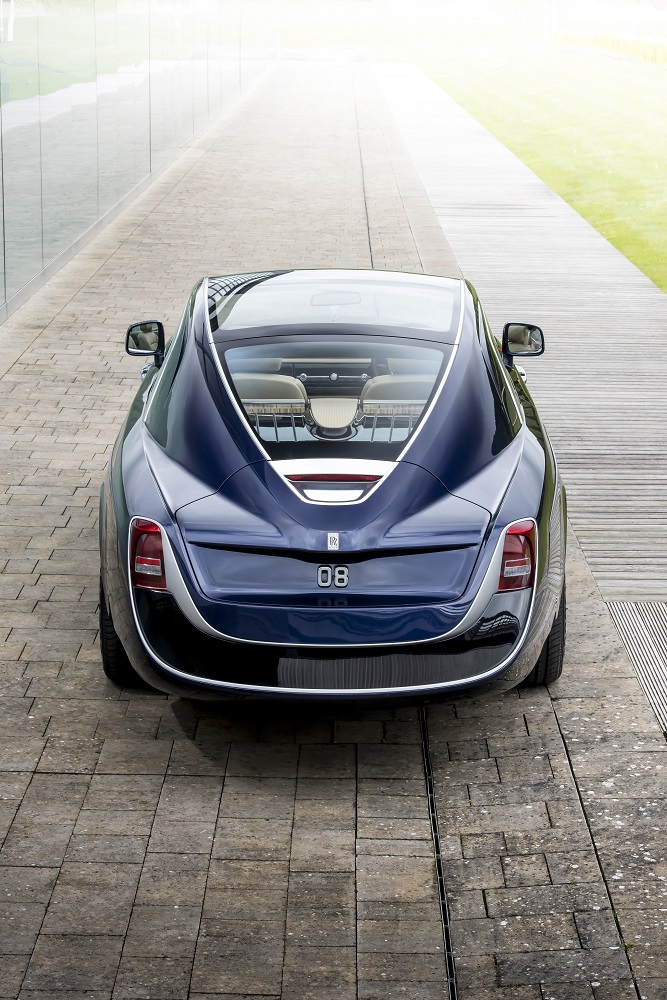 The glass roof – one of the largest made – allows you to review a remarkably simplistic interior, but all in the best possible taste. A mix of dark polished Macassar Ebony and open-pore Paldao adorn the interior, contrasting with the light Moccasin and Dark Spice leather trim used on the seats and dashboard top. The dashboard itself has been given a minimalist look with all the switchgear discreetly relocated. Even the famous Rolls-Royce clock has been re-modelled in veneer!

There are only two seats, ahead of a wooden deck, to put it simply, which is described as a hat shelf. Of course you wouldn’t want your valuables to repose there in full view; behind each door there is a pannier containing custom-made cases to take care of your lap-top and the like.

One last thing…  the dashboard does house one important control. At the press of a button, a bottle of the owner’s favourite vintage champagne is deployed, together with two crystal champagne flutes.. How’s that for style?

Yes, it really is ‘just a car’, even though Rolls-Royce make no mention of an engine in their press information. One presumes it has one, but perhaps it would be rude to ask! 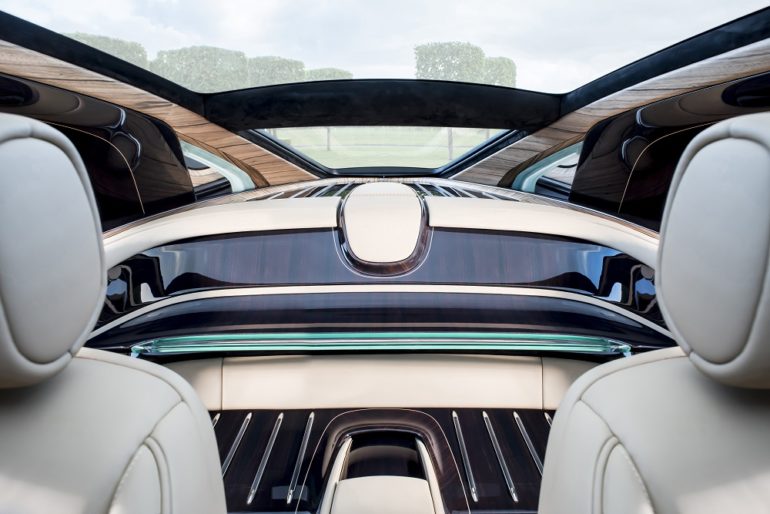 By now you are probably day-dreaming about owning the Rolls-Royce Sweptail and the epic road trips you could make, along with a special friend. As a petrolhead you would have been spoilt for choice over the Bank Holiday Weekend – unless you were stuck in a traditional traffic jam on the Exeter By-Pass.

Of course you could have wafted down to Italy and the opulent surroundings of Villa d’Este where you would have enjoyed the annual Concorso d’Eleganza where a heady mix of automotive stars from the pass mingle with the latest design concepts presented by a variety of manufacturers, including Rolls-Royce of course. Or if that was a little too sedate for you, you might have popped over the border and wafted into town for the Monaco Grand Prix, where Sebastien Vettel gave Ferrari its first win in the Principality for sixteen years. He was followed home by grumpy team-mate Kimi Raikkonen too.

Even with the town full of high rollers for the occasion, your Roller would certainly put you a cut above the rest – like Channel 4’s TV presenters you might even have got to breakfast at the top table with Prince Albert and Princess Charlene. Your arrival would surely have been more dignified than that of Eddie Jordan, who pedalled across the harbour on a water-borne bicycle! 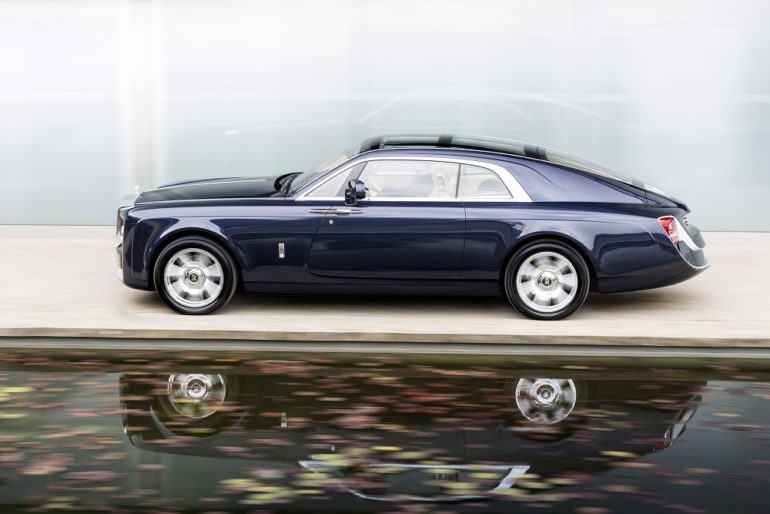 If you like street racing but the modern cars are not for you, maybe you would have swept off to the west and the ancient city of Pau, where the historic racers were in town. Your journey would certainly have been less fraught than that of British racer Tom Smith. His van broke down near Rouen whilst en route to Pau and he resorted to returning to Reading for another van and trailer; crossing the Channel twice on a Bank Holiday Weekend is a sign of true grit! It was all worthwhile in the end as he won the Historic Formula Ford 2000 race.

Should you wish to really test the performance of your Rolls, you would had to have headed to Germany and a blast along an unrestricted autobahn. That in turn would have led you to the Nurburgring Nordschleife, the magnificent 14-mile roller-coaster ride through the Eifel Mountains, where many manufacturers test their future models to the limit. They were doing it for  real this weekend, with the 24-Hour race taking place. What was originally a glorified club race has developed into a serious GT affair, a slug-fest between manufacturer-supported teams. This years’ edition saw an Audi R10 win-out over a BMW M6 GT3, but not before weather played a part – after a weekend of soaring temperatures a heavy downpour in the last half-hour caught out more than a few weary racers.

Had you preferred not to venture into foreign climes, Kent might have been your destination, for the old Grand Prix circuit at Brands Hatch was host to the Masters Historic Festival and you would still have got an F1 fix with the FIA Historic F1 championship heading the bill, a large field of mostly Cosworth DFV-powered cars such as Lotus, Williams, Arrows, March and Surtees brining back many memories.

If you are of a certain age, you may remember televised rallycross on a Saturday afternoon when the likes of Will Gollop’s Mini and Roger Clark’s Capri, or even John (father of Jenson) Button’s VW floundered through mud and snow. Remarkably rallycross is fifty years old now and things have moved on with an official FIA-sanctioned World Championship. To mark the occasion the series returned to Lydden Hill where it all began – looking a little more manicured these days – this weekend. 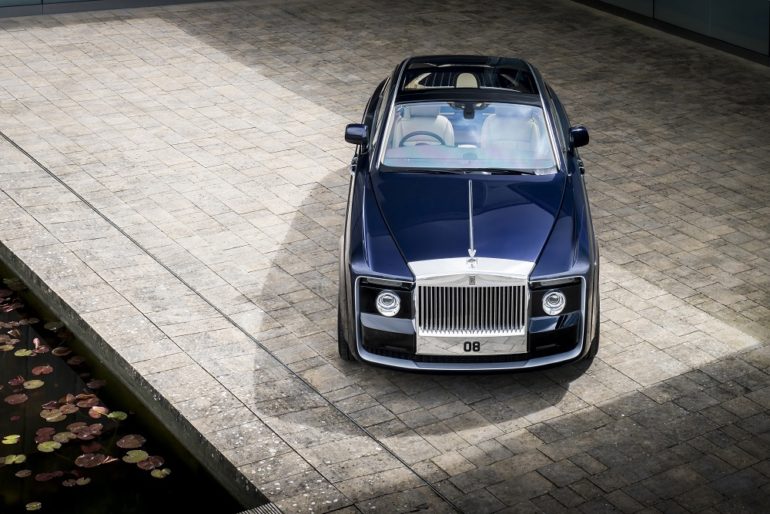 Of course you might not have wanted to put any miles on your pride and joy, leaving it secure in its motor-house whilst you jetted off to America – not by British Airways obviously, you would have your own private jet. Once there you would have joined the huge crowds to witness the Indianapolis 500 race. Former World Champion Fernando Alonso made the trip too, not to watch the race but to take part, rather than suffer the embarassment of dragging his recalcitrant McLaren around the streets of Monaco; he left it to Jenson Button to take-up that role, Jenson thanking him by offering to pee in the seat! That’s what McLaren drivers think of the once-mighty machines these days.

Fernando went down well with the appreciative American crowd and they rose to their feet to applaud him when, after having led the race, his McLaren-liveried Dallara-Honda did the inevitable, its engine expiring before the end, a scenario the luckless Alonso has become used to. It would not escape his attention that the race was one by another Honda-powered car run by the same team as his, Japanese driver Takuma Sato snatching victory in a nail-biting finish.

Oh well, the weekend is over, you’ve awoken from your dream, checked the garage and there’s no Rolls-Royce Sweptail awaiting you so it is back to the dreary daily commute.

Are the trains running?