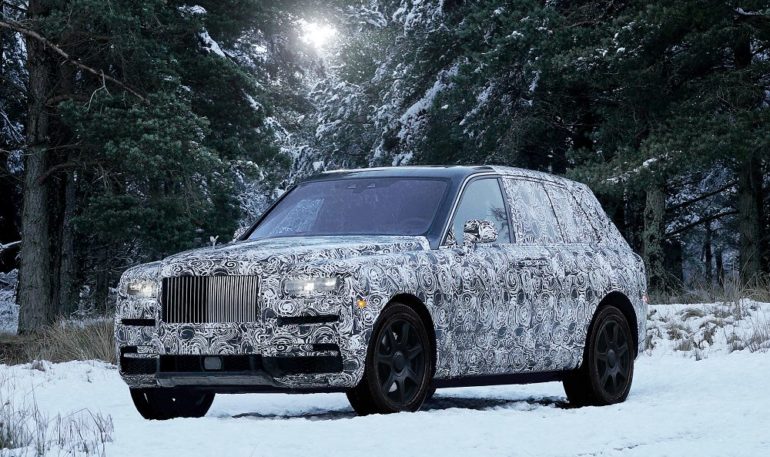 Rolls-Royce has named its new SUV the Cullinan. The name comes from the Cullinan Diamond, which was extracted from a mine deep in South Africa’s Magaliesberg Mountains in 1905, and at 3,106 carats, remains the largest diamond ever discovered. Cleaved into nine stones, cut and polished, the two largest portions of the Cullinan reside in the British Imperial Crown and Sovereign’s Sceptre with Cross.

Inspired by the epic processes, over many millennia, which went into the creation of the Cullinan Diamond, the name embodies the new motor car’s promise. Endurance and absolute solidity in the face of the greatest pressures; Rarity and preciousness and the pioneering, adventurous spirit of The Hon. Charles Rolls and the engineering innovation of Sir Henry Royce.

“The name Cullinan has been hiding in plain sight since we revealed it as the project name some years ago,” comments Torsten Müller-Ötvös, Chief Executive Officer of Rolls-Royce. “It is the most fitting name for our extraordinary new product. Cullinan is a motor car of such clarity of purpose, such flawless quality and preciousness, and such presence that it recalibrates the scale and possibility of true luxury. Just like the Cullinan Diamond, the largest flawless diamond ever found, it emerges when it is perfect and exists above all others.”

Cullinan is the second Rolls-Royce to sit atop the company’s recently announced all-new proprietary aluminium spaceframe ‘Architecture of Luxury.’ Unique and unequalled in its brilliance, every facet of the Rolls-Royce Cullinan scintillates.

From the Queen to Wayne Rooney, Auto Trader Reveals Having a Famous Owner can Increase the Price of a Car by up to 241%