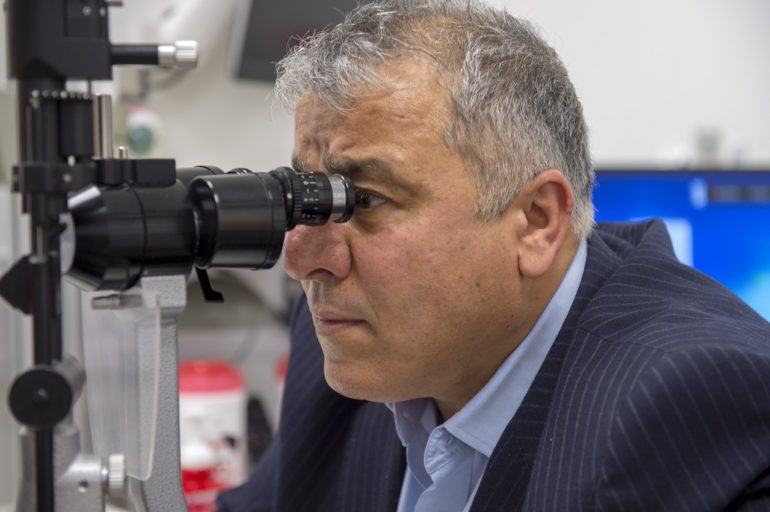 A healthcare check by optical retailer Vision Express has revealed that one in four commercial vehicle drivers have not had their eyes tested since passing their driving test. The initiative was carried out at the recent Commercial Vehicle (CV) Show in Birmingham, held from Tuesday 24 to Thursday 26 April.

Vision Express carried out free eye tests for industry experts to raise awareness of eye health. Over the two days they discovered that 26% had not had an eye examination since passing their test, and just over half as many (17%) had never had their eyes tested.

From those tested, 81% were overdue an examination, whilst 62% – almost two-thirds – required a new prescription.

The Commercial Vehicle Show is an annual event held in Birmingham, attracting professionals from the road and transport industry from across the globe – including regular HGV drivers.

Oli Willson, 34, from Loughborough, volunteered for a free eye test due to recently experiencing discomfort in one eye: “I’ve never had a test because I’ve always thought my vision was alright, but I’ve recently been having a twitch in one eye, so it was great that I saw the van at the show, in a place that I wouldn’t have expected, which actually made me do it.

“I think the van is a great idea as we have such busy lifestyles now. With things such as work and children, trying to get in to do simple things like an eye test is always difficult. I didn’t know what to expect due to never having had one before and I asked quite a lot of questions, but the test was good, and the team was great. The process was explained well and it was easy. It’s good to know that there are no problems and I’ll be having regular tests now as I’m getting older.”

Fellow visitor to the van, Alistair Couper, 52, was given a referral by the on-board optometrist due to minor pressure behind the eye. He said: “I’m exhibiting at the CV Show and one of my staff told me about the Vision Van. I was having some discomfort and pain in my eye and I was due an eye test, so it was the perfect opportunity. It was over a year ago since I’d last had an eye test.

“I’ve been given a referral letter for the doctor for a blood pressure check, which is very useful. I’m delighted that I came on-board today – it was a very professional service and I would encourage all of my staff to get regular eye tests, especially as they’re high computer users.”

Vision Express introduced the Vision Van initiative at the beginning of 2018, and the high-tech mobile facility will be making its way across the UK to raise awareness of the need for regular eye tests. In addition to road safety, many health issues can be detected through an eye test.

Vision Express CEO Jonathan Lawson said: “Our Eye Tests Save Lives campaign specifically targets drivers, to encourage them to consider if their sight is up to scratch before they get behind the wheel. Statistics indicate that around 3,000 road casualties every year are down to people driving with below par vision – so it is a significant road safety issue. We are committed to addressing it by attending events such as the CV Show and offering free tests on the Vision Van. And the great news is that policy-makers are now supporting our message, with the DVLA including reminders about getting an eye test in the photo licence renewal letters it sends out.”

Richard Burnett, CEO at the Road Haulage Association (RHA), one of the CV Show’s three partner organisations, added: “The CV Show is one of the largest transport industry events of its kind and exactly the right audience for Vision Express to reach out to –professional drivers and motoring enthusiasts, plus hauliers, operators and manufacturers – with the crucial message about the importance of regular eye tests.

“For many visitors driving is an integral part of daily life and for some it’s their livelihood. It’s staggering that Vision Express found that almost a fifth of visitors to the Vision Van were overdue an eye test, so we know there’s still a very important job to be done to make the UK’s roads safer.”

Thousands Drive with over 12 Penalty Points on their Licence