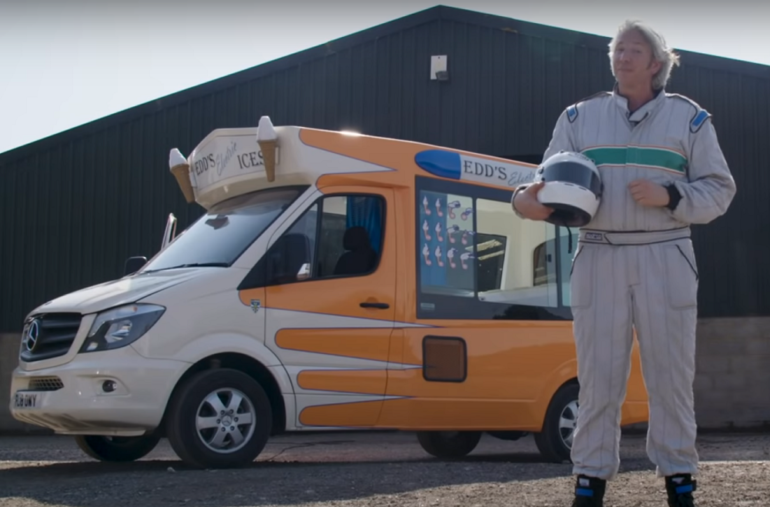 China is a TV personality famed for presenting the car restoration programme Wheeler Dealers on the Discovery Channel. He has spent the last two years converting the ice cream van (which was originally powered by a Mercedes Sprinter engine) from diesel to electric after hearing that some London boroughs have banned the vans because of their harmful emission levels.

In an environmentally-driven move, Edd has plans to introduce a conversion kit for ice cream vans allowing them to become electric-powered in the near future, allowing them to continue delivering ices to all areas of London.

The TV star said “Perhaps the most important thing that’s come out of this project is I’ve actually developed a kit that will convert any diesel ice cream van to run with its ice creaming machine working off of electricity. Which means no more diesel fumes ever again with your ice cream. That’s got to be a winner.”

The quirky presenter’s ice cream van has given him his seventh Guinness World Record entry relating to speedy motorised vehicles. Edd also holds the record for the world’s largest motorised shopping trolley at a height of 3.5m.

Edd is already planning his next speed-related challenge in a bid to break the fastest motorised shopping trolley record, which currently stands at 70.4mph.  Edd plans to make his speedy shopping trolley street legal, using an electric drivetrain to power the cart.

Edd’s achievement will feature in the 2021 edition of the Guinness World Records, which will be on sale from September.

Editor-in-chief Craig Glenday commented: “This year’s incredible edition has been compiled in the most extraordinary of circumstances.

“Halfway through writing it, the world was turned upside down by Covid-19, but despite lockdowns and quarantines, it’s not prevented amazing characters like Edd from breaking records.”

Heidi Klum Shows She Still Got It

The Next Bag Thing

Eurostar Announces the Launch of its New London-Amsterdam Service