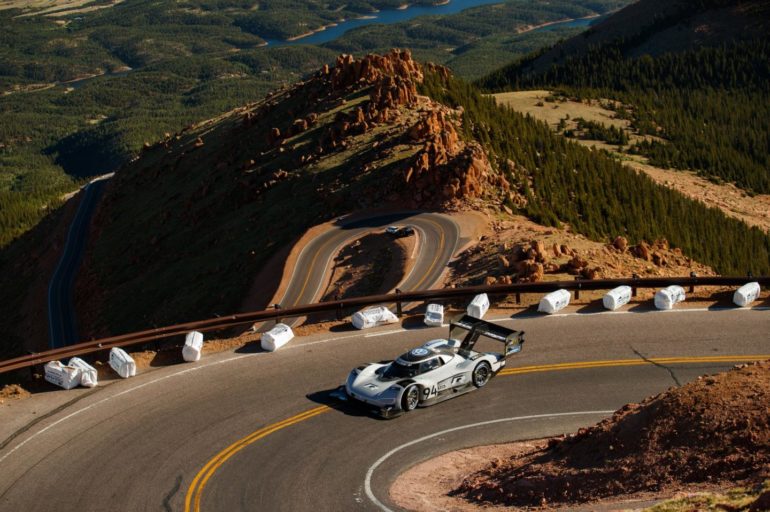 An electric car has smashed the lap record at the world-famous Pikes Peak hillclimb, beating the fastest time recorded by a fossil-fuelled machine by more than 15 seconds.

The battery-powered Volkswagen I.D.R, driven by two-time Le Mans winner Romain Dumas, was officially only expected to set the record for an electric vehicle, which prior to the event stood at 9m 07.222s. Early testing, however, indicated that the overall lap record could be broken in the ‘race to the clouds’, which has been dominated by electric cars in recent years.

The 156-corner Pikes Peak roll of honour includes rally heroes Walter Röhrl, Michèle Mouton, Stig Blomqvist and Ari Vatanen, whose own attempt has become one of the most famous Youtube onboard videos:

A delighted Dumas said: “Awesome! We exceeded even our own high expectations with that result. Since this week’s tests, we have known that it was possible to break the all-time record. For it to come off, everything had to come together perfectly – from the technology to the driver. And the weather had to play ball too. That everything ran so smoothly is an incredible feeling, and the new record on Pikes Peak is the icing on the cake. I still cannot believe that Volkswagen and my name are behind this incredible time. The I.D. R Pikes Peak is the most impressive car I have ever driven in competition. The electric drivetrain means that many things are different and I learned a lot during the project. The team did an indescribably meticulous, yet at the same time relaxed, job. Not only did we get the desired result, but the team spirit was also spot on. I am incredibly proud to have been a part of it.”

Sven Smeets, Volkswagen Motorsport Director and a former WRC co-driver, added: “This is a fantastic day for Volkswagen and one, of which we are very proud. The I.D. R Pikes Peak is the most innovative and complex car ever developed by Volkswagen Motorsport. Every employee involved in the Pikes Peak project has constantly had to push their boundaries and show extreme commitment and dedication. Without this, it would not have been possible to repeatedly overcome new challenges and come up with new solutions. It should actually be impossible to achieve all that and especially the all-time record in such a short time, but our team pulled it off thanks to their passion and commitment. Thank you to everyone who worked so hard on the project and showed such fantastic team spirit.”

The VW I.D.R is the latest electric vehicle to revolutionise motorsport. It was developed and built in just 250 days, and designed to be as light as possible whilst maximising downforce in the thin air at the top of the mountain. The 1,100kg machine develops 500kW, which is equivalent to around 670 horsepower, and can be fully charged in just 20 minutes, in accordance with the event regulations.

Dr. Frank Welsch, Member of the Board of Management of the Volkswagen Passenger Cars brand with responsibility for “Technical Development”, said: “The I.D. R Pikes Peak is the sporty forerunner of Volkswagen’s I.D. family. Today, we saw what this technology is capable of. Every Volkswagen employee can be extremely proud of today’s result. I congratulate the team from the bottom of my heart. With a combination of outstanding engineering skills, passion and commitment, the team has managed to create a fantastic racing car in just eight months. The Volkswagen I.D. R Pikes Peak has now set the fastest time in the history of this hill climb, which spans more than 100 years – that speaks volumes for electric mobility.”

Footage of the run can be viewed here: