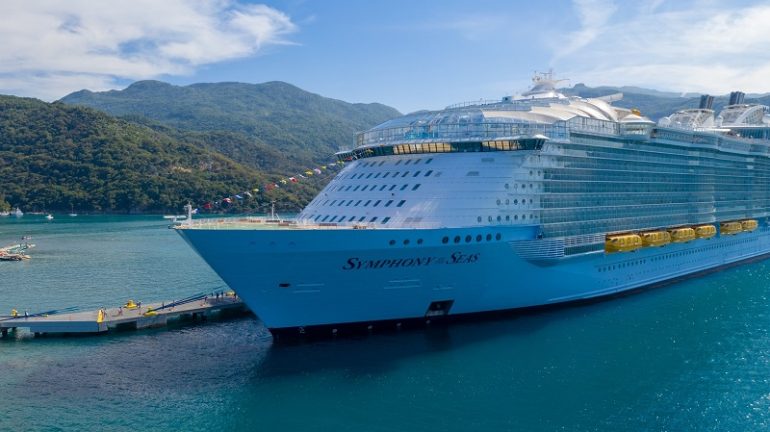 Sister ship Symphony of the Seas

The world’s biggest cruise ship, Wonder of the Seas, has just completed her maiden voyage.

The Royal Caribbean liner, which is five times bigger than the Titanic, is a record-breaking 362 metres long and can accommodate 6,988 passengers and 2,300 crew members.

Weighing in at an immense 236,857 tonnes and with a top speed of 22 knots (25mph), Wonder of the Seas first journey was a seven-day voyage from Fort Lauderdale, Florida to the Caribbean.

The ship has plenty to do onboard – one holidaymaker has described it as ‘a city on water’ – as it has 19 swimming pools, 20 restaurants, 11 bars, an ice rink, a casino and even its own version of New York’s Central Park, complete with 20,000 trees and plants.

Also onboard is a boardwalk, lined with restaurants serving up Italian, French and German cuisine, along with fast-food outlets.

Top entertainment onboard includes an Aqua Theatre where high-divers plunge from 60ft boards into a swimming pool and nightly shows in the indoor ice rink. Thrill-seeking passengers can brave the surf pool which generates waves 12 ft high, a ten-deck-high zip line and two rock-climbing walls.

Kids of all ages are catered for with Playscape, an attraction described as ‘an onboard wonderland for kids’ – which has a slide that lifts riders up a near-vertical wall on a raft before flinging them back down with a giant splash. There’s also a mini-golf course, Laser Tag game area, video game arcade and an outdoor movie theatre to keep younger members of the family entertained.

Wonder of the Seas took three years to build in Saint-Nazaire, France, at a cost of more than £1billion.

The cruise liner had originally been set to launch in China last year, but plans had to be shelved due to the pandemic.

Royal Caribbean claim bookings are back to pre-pandemic levels, with chief executive Jason Liberty saying: “We are eager to move forward this year. We expect 2022 will be a strong year as we bring the rest of our fleet into operations and approach historical occupancy levels.”

The Best Cities in the UK to Own a Garden