Conquer the city of spires with the local vehicle of choice – the bike. Inspired by legendary Oxford alumni, follow our expert’s tips to get the most out of a magical Oxford day trip 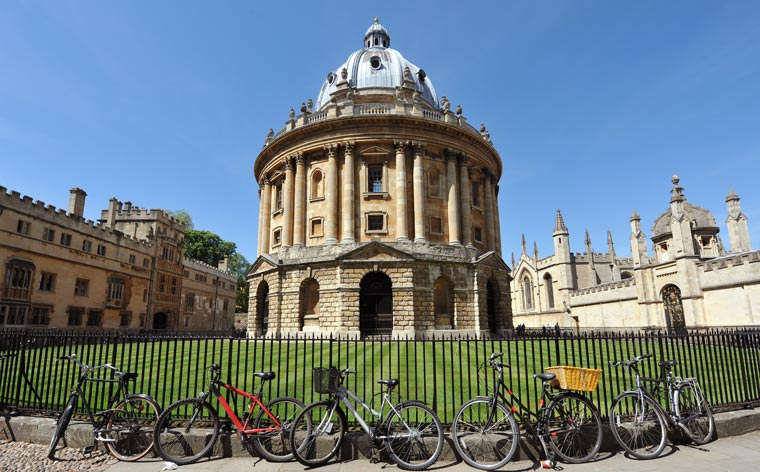 Oxford is a city that has to be seen to be believed – day-tripping by bike through its narrow streets gives you the perfect opportunity to discover what makes it so special and why it became the backdrop of so many stories throughout history.

Much of the city is closed to cars, so sail along the city streets on a bike, taking in the sights at your own pace. Here’s a checklist to make your Oxford day trip as legendary and magical as its attractions, courtesy of bike rental service Donkey Republic and their local cycling expert, Anna Peters. 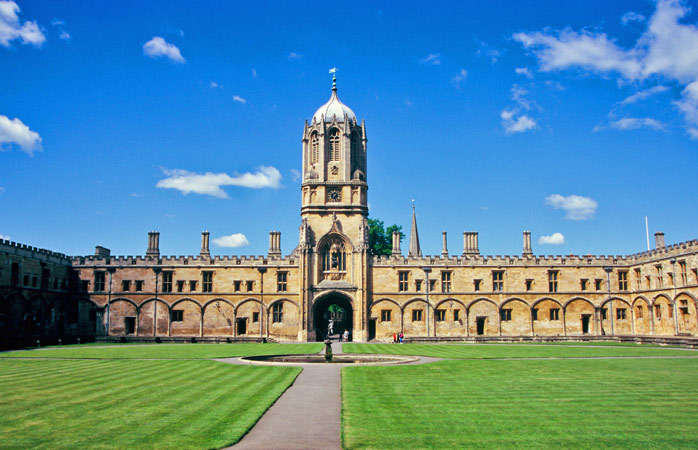 Just you and Tom Tower in the Christ Church College quadrangle

Grab your wheels and pedal on down to Oxford’s most magnificent college, Christ Church, which explains Oxford’s nickname of the city of dreaming spires. The spire you’ll notice first is Tom Tower, the rather confident-looking main entrance.

Smile at the bowler-hatted porters and pay the £7-£9 entrance fee to access Oxford’s most awe-inspiring quadrangle (courtyard) – former mathematics lecturer Lewis Carroll was inspired to write the novel Alice in Wonderland here.

Hidden away is a cathedral with beautiful pre-Raphaelite stained glass windows, and nearby stands the vaulted entrance to Christ Church’s dining hall, both of which doubled as Hogwarts in the early Harry Potter films. Imagine yourself waiting to be sorted into Gryffindor, as you let Christ Church’s beautiful buildings cast their spell on you. 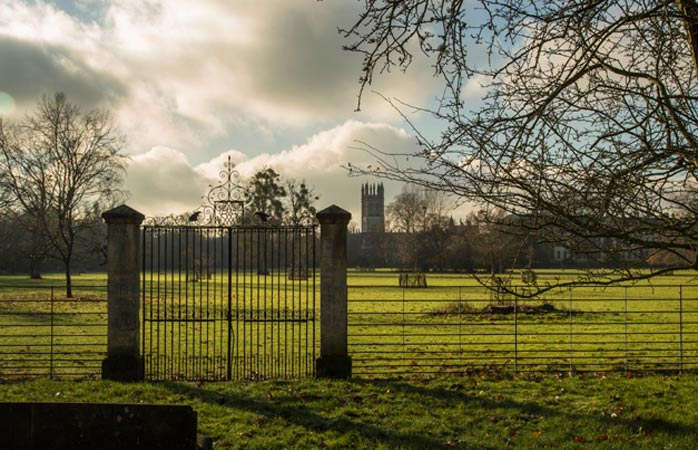 If there’s anyone from the past who would’ve been an instant Instagram celebrity nowadays, it’s Magdalen College alumni Oscar Wilde. Not only was he the ultimate style guru of his day, but he was brilliant at writing funny one-liners and catty put-downs – his plays are full of them.

As well as beautiful cloisters that were used as a Harry Potter set, Magdalen has a large deer park where you can saunter along shaded paths to catch sight of clusters of these shy creatures.

Every so often, you’ll see black lamp posts along the path, which might remind you of the most famous scene in the Narnia books, where Lucy Pevensie meets Mr Tumnus the faun in The Lion, The Witch and the Wardrobe. The author, C. S. Lewis, was an English tutor at Magdalen for almost 30 years.

Go back in time along Queen’s Lane 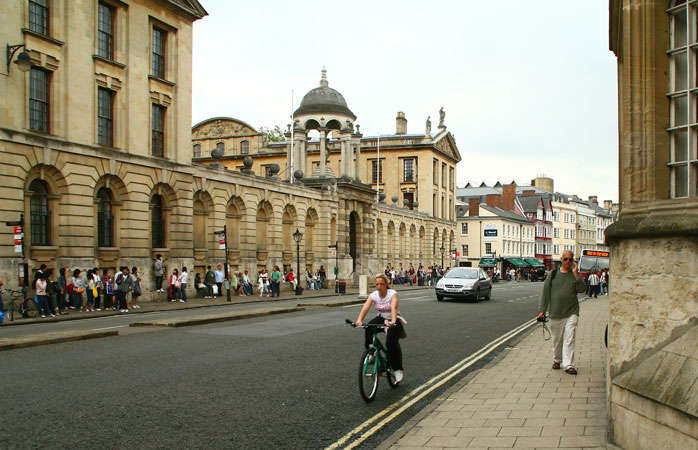 Time to head back to the heart of Oxford, so hang on to your handlebars and cycle back up High Street, turning right onto Queen’s Lane. This narrow conduit takes you past four colleges: Queen’s College, St Edmund Hall, New College and Hertford College.

This little piece of Oxford has hardly changed in hundreds of years. As well as being a handy, bike-friendly shortcut through the city, you’ll see the former home of famous star-gazer Edmund Halley (look for the blue plaque).

Pause for a pint with Oxford’s students at the quirky and popular Turf Tavern (est. 1381) and continue on under the iconic Bridge of Sighs to the world-famous Bodleian Library.

Read all the books at the Bodleian Library 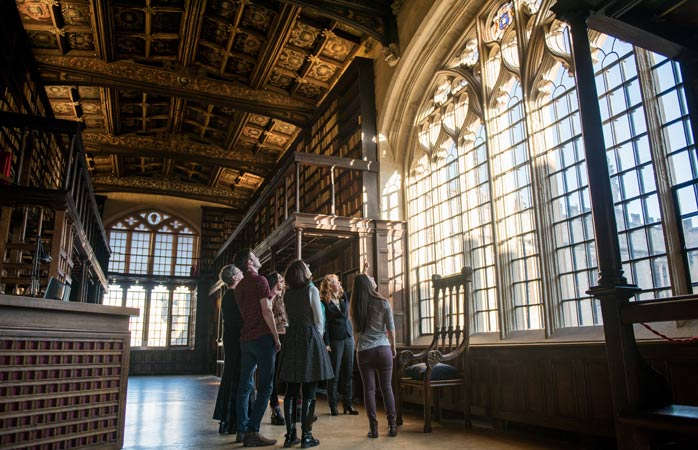 You’d be forgiven for thinking ‘the Bod’ looks more like a castle than a library. Its austere walls can seem daunting at first, but treasures await inside. There are more than 12 million items held here, from modern books and journals to stunning medieval manuscripts.

This is Oxford’s main reference library, so if there’s a book you want to read, you’ll find it here. You can add a tour to your day trip if you’d like to explore its bibliographic riches. Just like Christ Church and Magdalen College, the Bodleian was used as a film set during the filming of the Harry Potter films (more specifically in Duke Humfrey’s room), and would-be detectives might be interested to know that Inspector Morse also tracked down villains in the honey-coloured quadrangle.

Escape the buzzing crowds at a riverside pub 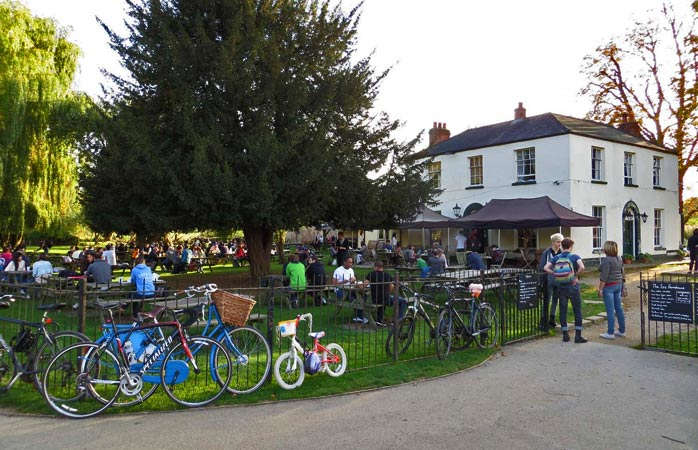 Escape the city’s crowded streets – take to your two-wheeled steed and spin off into the countryside. Lucky for you, there are a few chic waterside hostelries to choose from.

Heading along the path from Folly Bridge, you’ll find the rustic Isis Farmhouse just past Donnington Bridge. On the way, you’ll see rowing eights and college boat houses, as well as pretty water meadows. Park up and enjoy a refreshing ale in the spacious beer garden. The food has a pretty good reputation, too.

Breathe in the fresh country air on Port Meadow 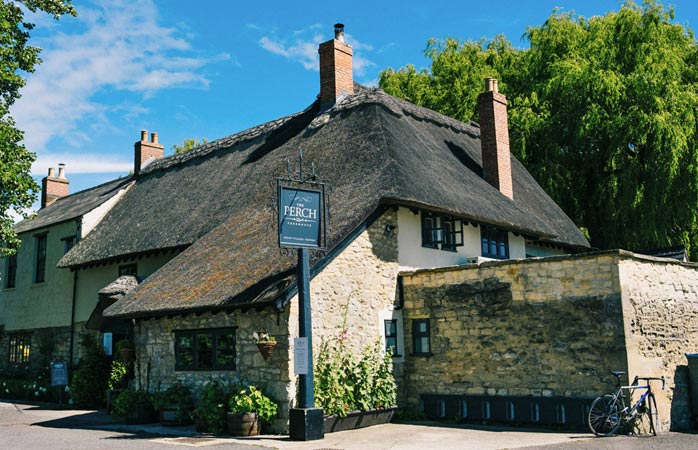 Grab a pint along the Thames at The Perch © Babb Photo

Visiting Port Meadow is one of the most popular things to do in Oxford on a sunny day. Follow the river path along the River Thames and you’ll soon find yourself confronted with the unexpectedly rural sights of the meadow. The historic Perch Pub can be found on this quieter stretch of the river path, which takes you past the picturesque canal boats at Osney Island to a secluded beer garden a short distance from the water.

If you’re feeling in need of a longer ride (just over six kilometres), you can pedal right across the meadow until you reach the village of Wolvercote. Cross an old, single track bridge and you’ll find The Trout Inn. Soak in the sun on the Trout’s riverside terrace, and enjoy a cool pint and a hearty meal. Competition for tables can be stiff on sunny days, so book ahead or prepare yourself for a long wait for a table.

Soak in the Oxford magic at South Parks 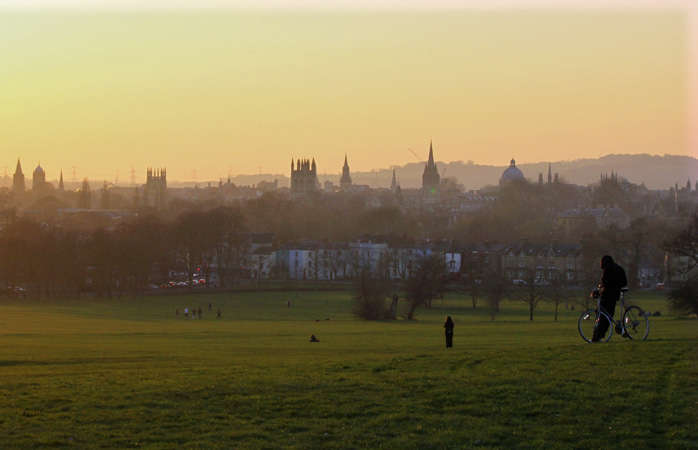 You and your bike deserve this magical, sunset view © tejvanphotos

South Parks offers the very best view of Oxford’s dreaming spires in the city. This is the perfect place to end your day trip. Park your bike and take in the beautiful skyline of the city. It’s quite a sight!

If you’re feeling adventurous, you can book a hot air balloon trip and see the city from an entirely new perspective. If you’d prefer to keep your feet firmly on the ground, the trendy pubs, bars and restaurants of Cowley Road are only a few pedals away.

Bored by the World Cup? Alternative Sports to delve into this Summer

On Your Bike – Claim a Free £50 Bike Repair Voucher