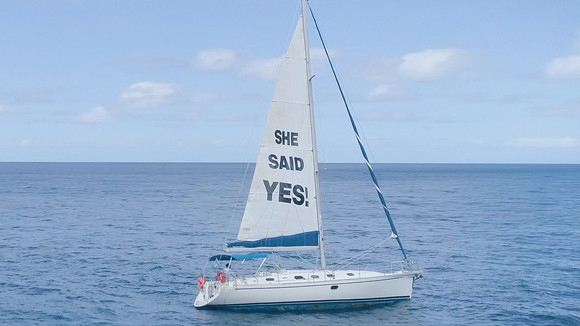 With Valentine’s Day just around the corner British Airways helped a Royal Navy hero pull off the proposal of a lifetime. Lieutenant Lee Colthart popped the question to his girlfriend, Lydia Ayto, in the Caribbean .

The 29-year-old Navy officer wrote in to the airline to share his story and said he wanted to propose to his girlfriend of seven years in the Caribbean after he was deployed there last year to help with the relief effort following Hurricane Irma.

Lee, who is originally from Fife in Scotland, said he was desperate to take his girlfriend, who is a navigator in the Navy, back to paradise to ask her to be his wife. The airline stepped in to help surprise Lydia with a whirlwind tour of three beautiful islands, and a cocktail of once-in-a-lifetime experiences, ending with a very special question for Lydia to answer.

Lieutenant Colthart said: “I’d planned to propose last year but we were both deployed overseas so the stars didn’t quite align. I knew this year was going to be ‘the year’ though, so I wrote to British Airways and asked them to help me pull off something extra special in one of the most beautiful places I’ve ever been lucky enough to see. I couldn’t have asked for anything better, the proposal was out of this world and I’m just so happy Lydia said yes!”

Carolina Martinoli, British Airways’ director of brand and customer experience, said: “We were so excited to be able to help Lee pull off this incredible proposal. He really has set the standard for other people wanting to pop the question in a really special way! Adding a touch of magic was easy when we knew we would be flying the couple to the Caribbean, it’s one of the most beautiful places on earth, and the backdrop speaks for itself.”

Lee and Lydia who live in Somerset, met at naval training college in Dartmouth in 2010, but since then have spent months apart as they have both been deployed around the world on tours lasting as long as seven months. Later this year Lee will be stationed abroad for five months, meaning the newly engaged couple will be apart for Christmas.

Their island-hopping adventure saw them fly in First and on arrival in Barbados were whisked by Rolls Royce to the newly opened Sandals Royal Barbados Resort, where the keys to a standard room were swapped for a set to their sumptuous beach front butler suite. They then watched the sun set from a private catamaran cruise, tasted fine rum at the island’s oldest distillery and dined at celeb-haunt The Cliff.

Next, the couple were driven to the exclusive Jet Centre like VIPs before boarding their private jet to ‘Spice Island’ in Grenada, where they spent time zip-lining through the jungle and soaking up the island’s sun, sea and unspoilt views. After making the 20-minute British Airways flight from Grenada to Saint Lucia, the couple were chauffeured to Sugar Beach Hotel to enjoy private dining in front of the world-famous Piton mountains.

The following day Lee got down on one knee in front of a 43-foot sailing boat with the words: ‘Lydia will you marry me?’ emblazoned on the sail, which when turned also revealed the words ‘She said yes!’ on the other side.

Valentine’s Day around the World