Top 7 Things To Do In Barcelona • Surf4Hub News and Blogs

Barcelona, the capital of Catalonia, is one of Europe’s most visited destinations. It’s crammed with art galleries, museums, and cathedrals – plus plenty of shops and places to eat.

Nestled between the sea and the mountains, Barcelona is a busy, vibrant place, with so much to see and do. If you only have a few days in the city, you’ll want to experience everything it has to offer – and there are some unmissable attractions that need to be on your list.

If you are planning a trip to this cultural and colourful city, we’ve rounded up the best things to do and see in Barcelona. 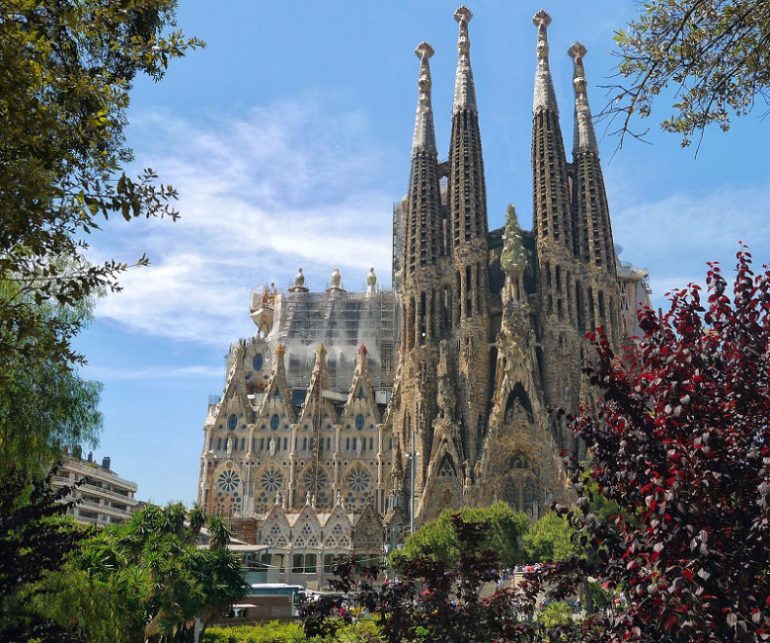 At the heart of Catalan culture, La Sagrada Familia has welcomed travellers for decades. The fairy-tale style church rises majestically above the city skyline – and it’s not even completed yet!

130-years in the making, La Sagrada Familia is due for completion in 2026, when it will be crowned as the world’s tallest church.

The immense basilica was the pioneering vision of Spanish architect Antoni Gaudi (who is buried under the nave) and has been added to over the years by the architects who have continued to bring his greatest work to fruition.

Visitors can stroll through the interior of the church and marvel at the gothic columns and the sculptures of the 12 stations of the cross by Jose Maria Subirachs.

This stunning museum, dedicated to the works of Spanish artist Pablo Picasso, is where you’ll find an extensive and enigmatic collection of his art. In total, there are an incredible 3,500 works on display, including his early masterpiece The First Communion.

Housed over five gothic buildings that form part of a medieval street called Carrer de Montcada, the museum opened in 1963 and exhibits the artist’s works from his earliest period as an apprentice through to his abstract Cubism pieces and the ‘Blue Period’.

Tickets start from €12. See the website to book tickets and for opening times. 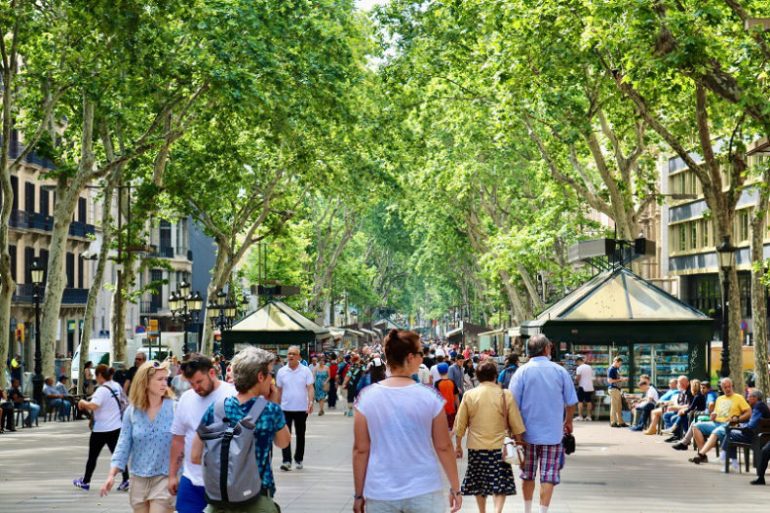 Barcelona’s most famous boulevard is 1.2km long and is made up of markets, shops, cafes, and bars to explore and delight in.

A stroll along Las Ramblas starts with the Columbus monument, where you can scale the statue and admire the view along the street. You’ll spot the Canaletes Fountain, where tradition has it that if you drink its waters, you are guaranteed to return to the city. Also on the main street is the famed Liceu opera house.

Foodies will enjoy Le Boqueria market – an eclectic mix of local delicacies and exotic produce – where you can enjoy a street-food snack or pick up the ingredients for a first-class meal. If you’d prefer someone else to do the cooking, book a table at Quim de la Boqueria, where the menu is inspired by produce from the market.

In comparison to La Sagrada Familia, the Santa Maria Del Mar church was built very quickly! The structure was constructed and completed between 1329 and 1383, making it one of the very few entirely gothic buildings in the world.

The basilica was designed by Berenguer de Montagut as a place of worship for the mariners, shipwrights and merchants of the city and is home to many stained glass windows overlooking the ocean.

We’d recommend booking a guided tour to hear about the fascinating history of the church, from its construction to the devasting fire that took place in 1936, and the subsequent renovation project. The tour will also take you onto the church’s rooftops where you’ll be able to enjoy a stunning view across Barcelona. 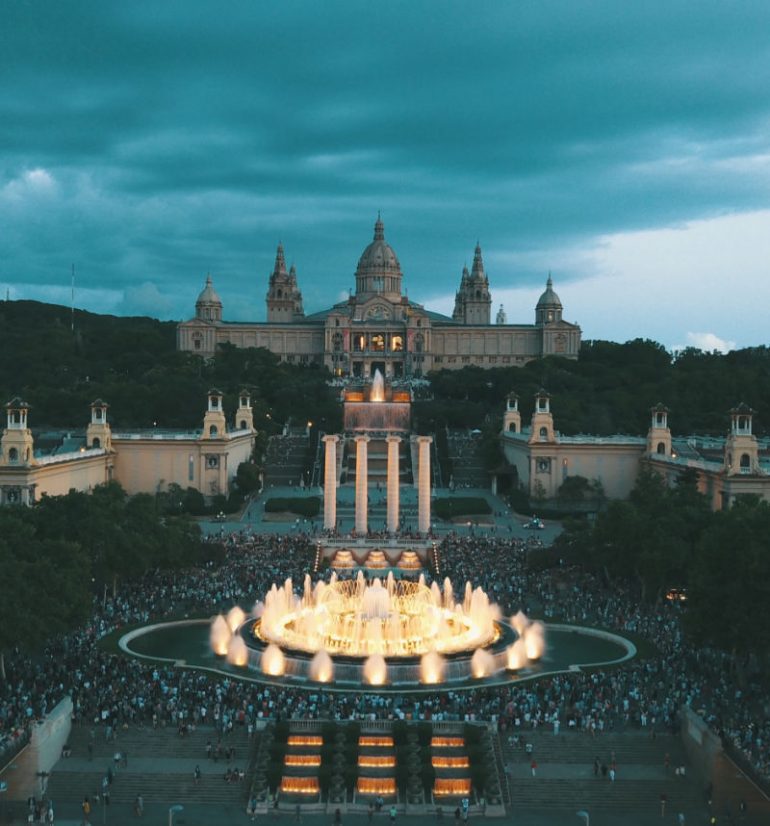 Keen walkers will enjoy the hike to the top of Montjuïc Hill, rising 173m above sea level to offer stunning views of the city and the ocean. If the walk sounds like too much hard work, you can take the cable car to the summit, so you don’t miss out on some of the best attractions that this historic area of the city has to offer.

Time your visit to catch a spectacular performance at the Magic Fountain, where light, sound and over 3,500 jets of water combine in all the colours of the rainbow to the amazement of the gathered crowds.

Showtimes for the Magic Fountain vary throughout the year – so check the timetable before making the climb!

If you prefer a quieter beach, Sitges, on the outskirts of Barcelona is well worth a visit. The beach has been awarded a Blue Flag for cleanliness and is split into sections designed for families, dog-walkers, and peaceful coves. There is also a nudist area on the Cala Morisca section of the sand.

A short stroll from the beach will bring you into the Bohemian streets which are still a mecca for poets and artists who gain inspiration from the whitewashed buildings and myriad of bars and eateries. 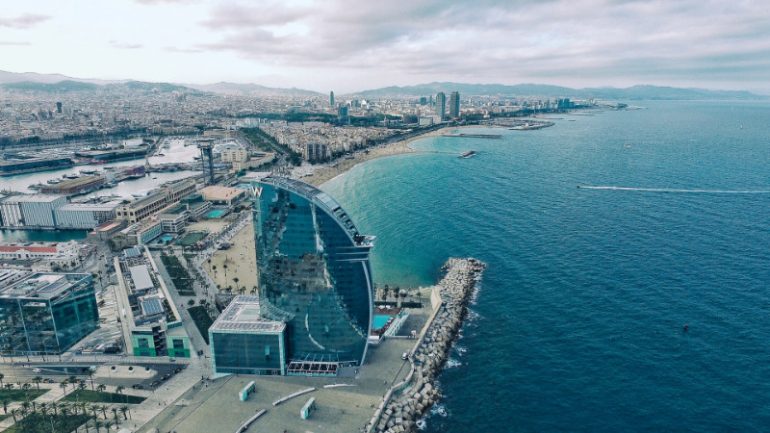 One of the reasons that Barcelona is such a popular destination is that it blends the best of a city break with a chance to swim in the sea and catch the sun on the beach.

Sant Sebastià Beach is the longest beach in Barcelona with 700m of golden sand and a sheltered cove for swimming. The cove is also home to lots of hotels, bars and restaurants lining the shores.

The beach is famed for swimming – it was the first beach to allow men and women to swim together in the 19th century – and there is a statue there to commemorate swimming sports, sculpted by Alfredo Sanz.

Nowadays, the beach has plenty of modern amenities for swimmers and sunbathers alike, with showers, sun loungers and a play area for children.