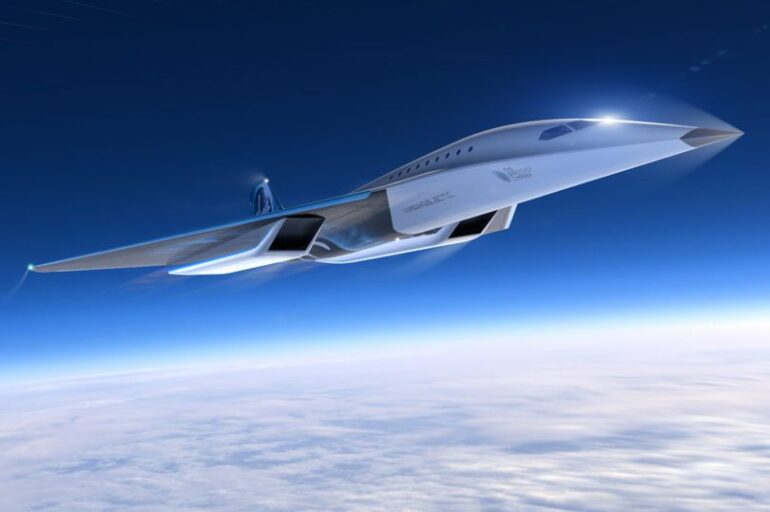 Virgin Galactic has unveiled new plans to produce a space-age super-jet that could transport passengers from London to New York in just 90 minutes.

The as-yet-unnamed aircraft is to be developed in collaboration with Rolls Royce.  Virgin Galactic has predicted the craft will cruise at an altitude of 60,000ft (18,000m) and will hit a top speed of 2,300mph (3,700kph).  That means the high-tech aircraft could cross the Atlantic in a third of the time it would take a regular airliner.  The jet could also whizz passengers from London to Sydney in six hours.

Virgin Galactic had previously announced it was in collaboration with NASA on a supersonic craft and said its designs were released after the completion of a concept review with the NASA experts.

The company, headed up by billionaire entrepreneur Richard Branson, also divulged that the design and development of the super-jet’s engines will be the result of a partnership with Rolls Royce, who also developed the engines for Concorde.

The craft has been designed to transport 19 passengers, in either Business or First-Class seating, at speeds of Mach 3, which is three times the speed of sound. It would be faster than the original supersonic aircraft, Concorde, which boasted an average cruising speed of Mach 2.

Virgin Galactic said it will now work with the Federal Aviation Administration to create a framework for certifying the aircraft for flight.

“We envision [the vehicle] blending safe and reliable commercial travel with an unrivalled customer experience. We have made great progress so far, and we look forward to opening up a new frontier in high speed travel,” Mr Whitesides concluded.

Virgin Galactic is famed for its efforts to launch space tourism. The company has been dogged by delays, but in 2018 a flight reached the edge of space without any paying customers on board. There are rumours that passengers for the first tourist flight face a ticket price of £175,000 for a trip above Earth at a height of 60 miles.

Air Taxis to Take Off! Flying Cars Could Roll Out in 2024

LASSCO Celebrates Over 40 Years with Collaborations and Talks Series