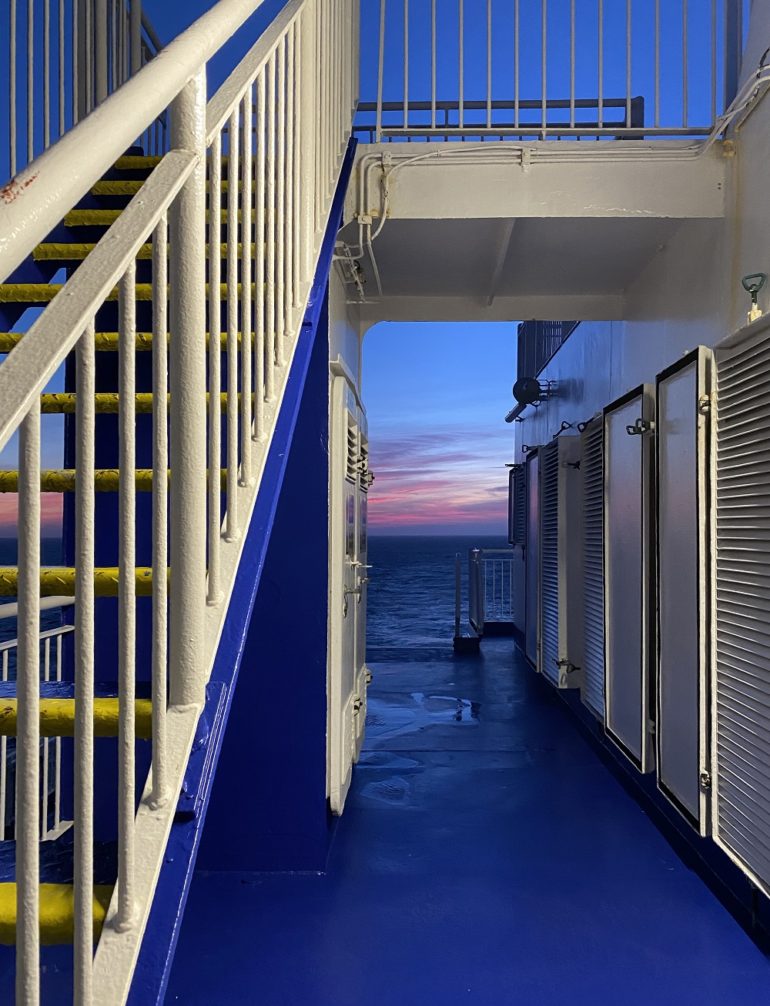 I got the train to Newcastle with a Waitrose sandwich and window seat. Wind and rain beating against the glass, hot tea from the trolley.

When the opportunity arose to combine a visit I needed to make to Haarlem, with a North Sea crossing research trip, I said ‘sign me up!’ and revelled in the thought of a new travel experience.

I sprinted from the station to the coach (less than 100 metres). Damp clothes and steamy windows. Onwards, to the ferry!

I love the sea, and I love the Netherlands, what could possibly go wrong? 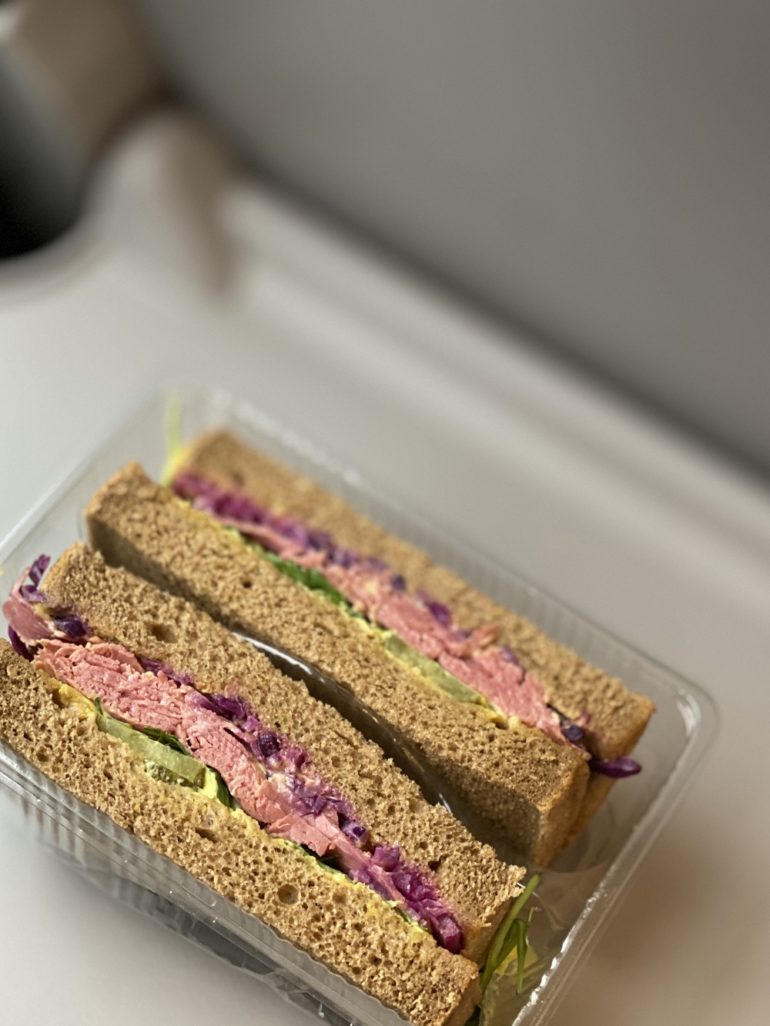 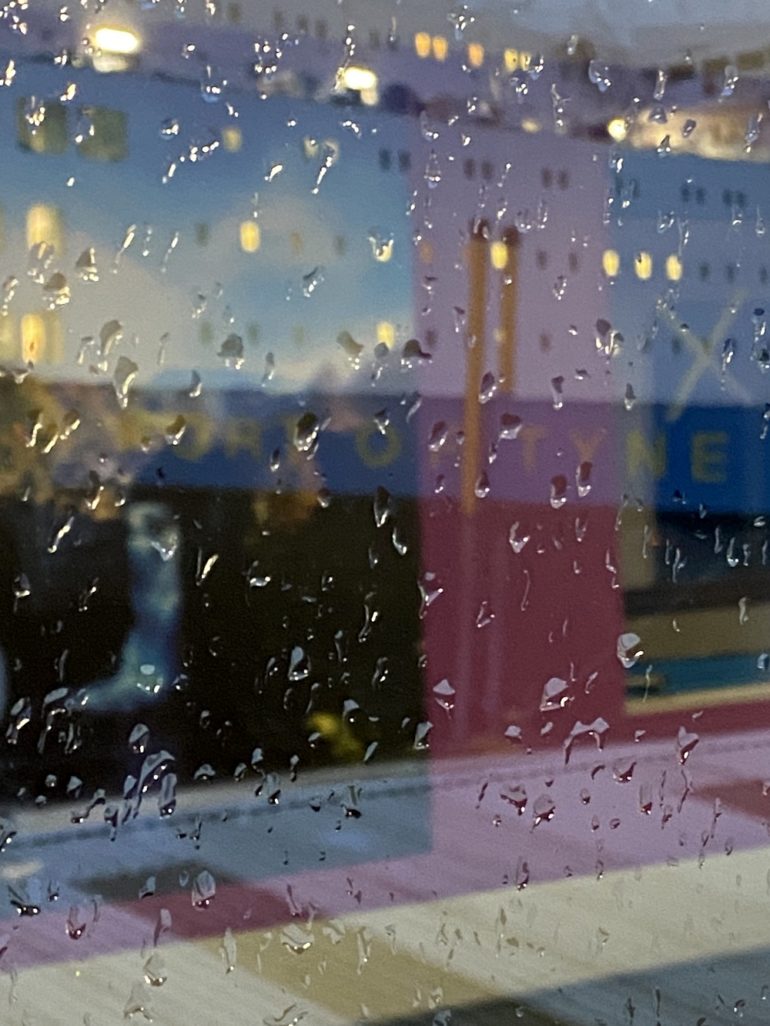 Within no time at all I was on Deck 11 admiring my four-berth cabin and deciding which bed I’d sleep in. I had a good window view (port out, starboard home), a little desk area, a small bathroom with a nicely branded shower curtain, plenty of mirrors and four duvets. I was feeling pretty smug.

A fanfare played through the little speaker above the door, then the Captain said, ‘It will be a calm crossing… until we hit force 7 in the night’. I imagined the force scale went up to 100 and carried on with the business of bed selection.

The UK had been experiencing some pretty hefty weather, I knew it was going to be choppy at sea, but that wasn’t going to stand in my way – partly because I knew they wouldn’t sail if it was unsafe, but mostly because someone said Storm Brendan sounded like a boy band member from the 90s. 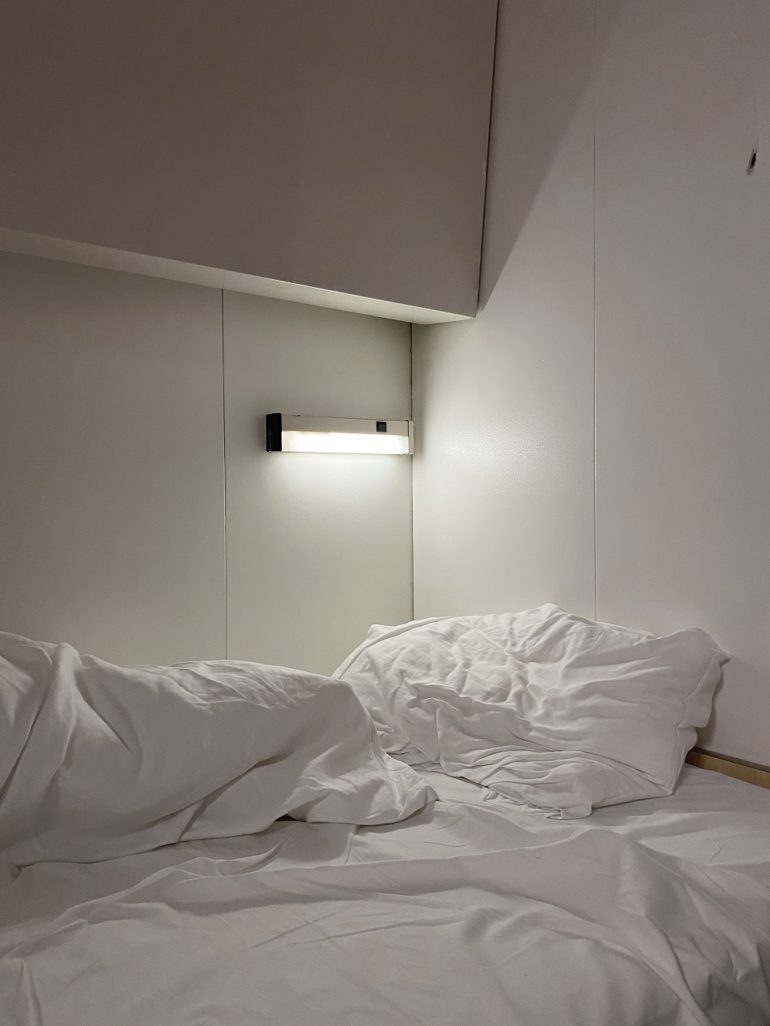 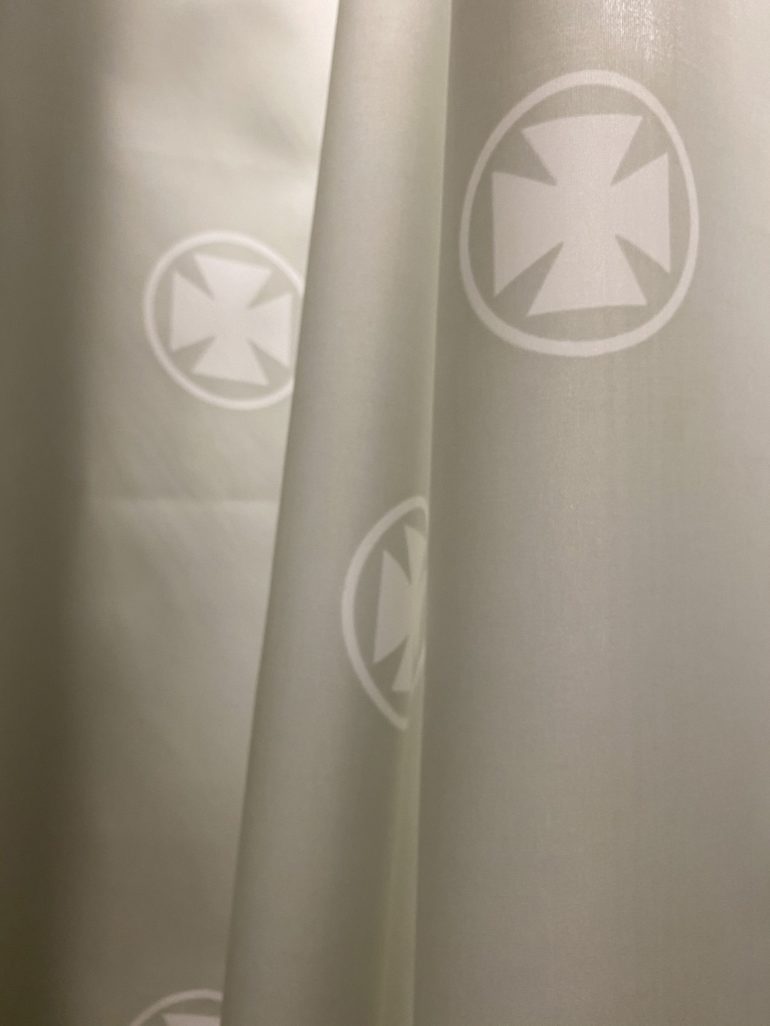 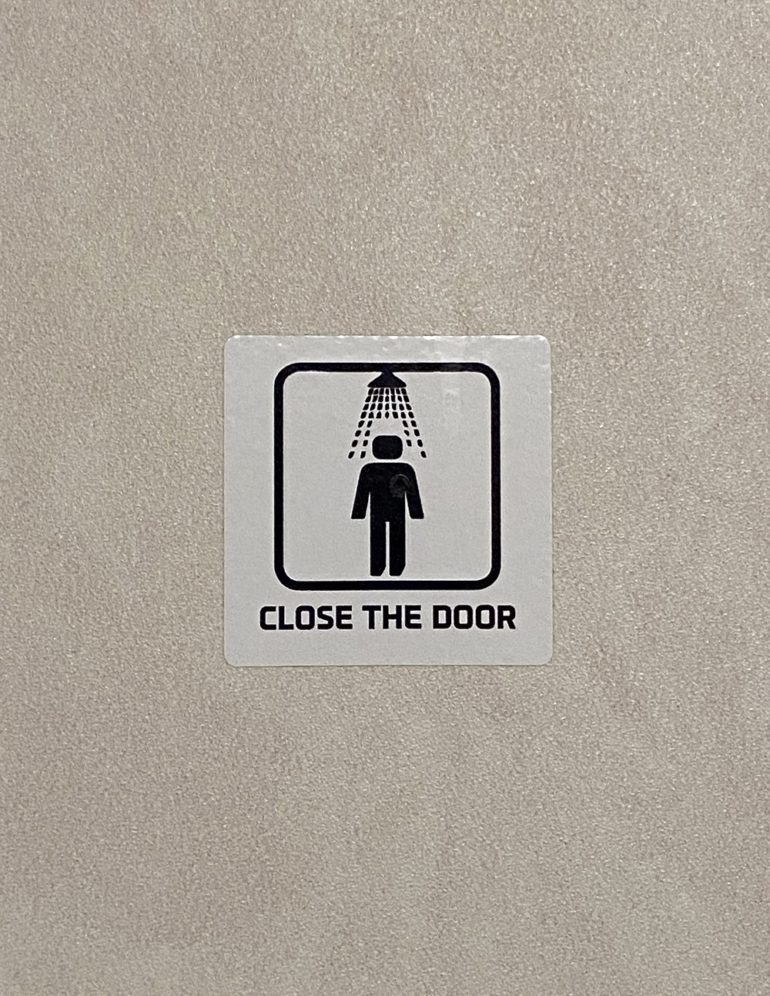 I wandered the decks of King Seaways, from the cinema to the Sky Bar, scouting out suitable spots to show an exhibition. Lots of spots, not all suitable!

Later at the dinner buffet the man next to me exclaimed, as he jubilantly clutched at a devilled egg, “DFDS are the dogs doo dahs!’ I sat on my own, ate rice with duck and spring onions, and lemon pannecotta, lost count of how many times I watched dogs-doo-dah man go back for another plateful.

On summer nights, when the evenings are long, you can visit the Observation Deck and watch for whales, dolphins, porpoises and seals. On winter nights people congregate in one of the bars and listen to live music, visit the casino or watch a film. It’s like a proper night out.

I rocked out in my room with a can of ginger ale, swayed from side to side by the sea in a gentle rhythm.  I felt pleased that I’d worked on my core in Pilates.

I’d intended to get some writing done, but by 9.30pm I was in bed. That’s 8.30pm UK time, and unheard of from me (unless I’m very sick), but I was tired, so tired, and lulled by the rocking waves.

It wasn’t long before I was lulled awake, well, more gyrated. The nautical striped curtain swung back and forth against the window, and my coat, on its hook, swung like a pendulum against the wall. Spray splattered and pelted my window as ship flexed and groaned, hitting waves like turbulence in a plane, and all the time rolling and swaying.

I lay flat on the bed as sheer gravity slid me up, down and around the bed, a bit like a puck on an air-hockey table. And all the time I was just amused, bloody tired, but amused. It was like being in an earthquake whilst riding a bucking bronco!

It wasn’t scary in any way. It was incredible and fascinating, and maybe about eight hours too long, but hey, it was an experience and a half! 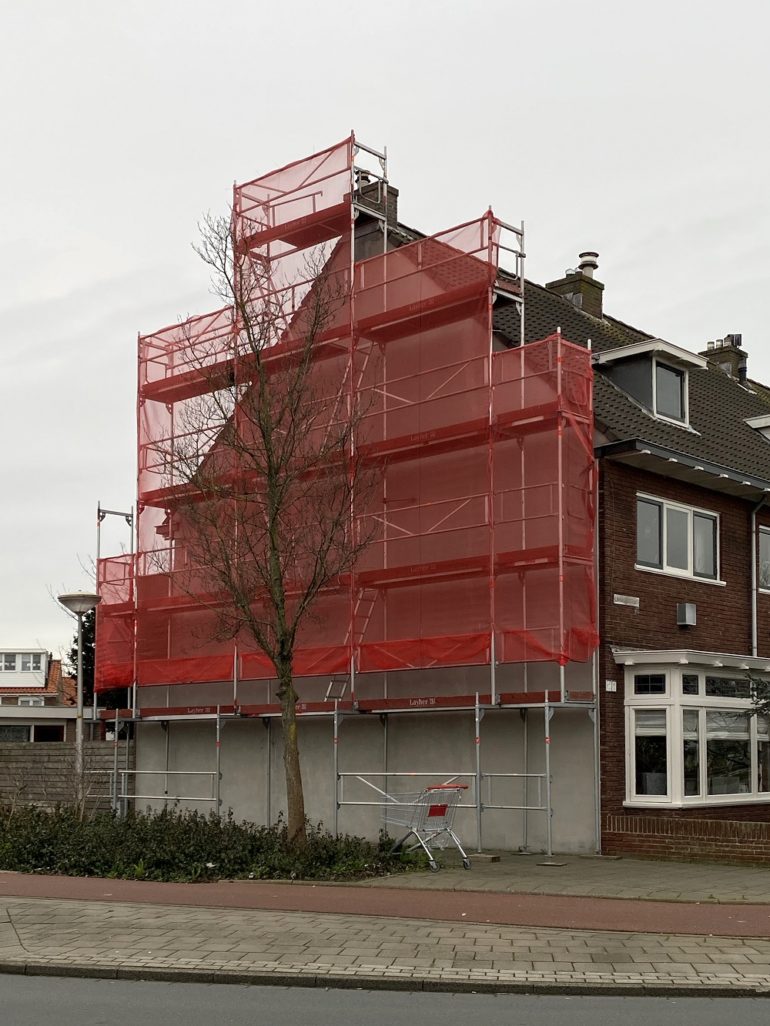 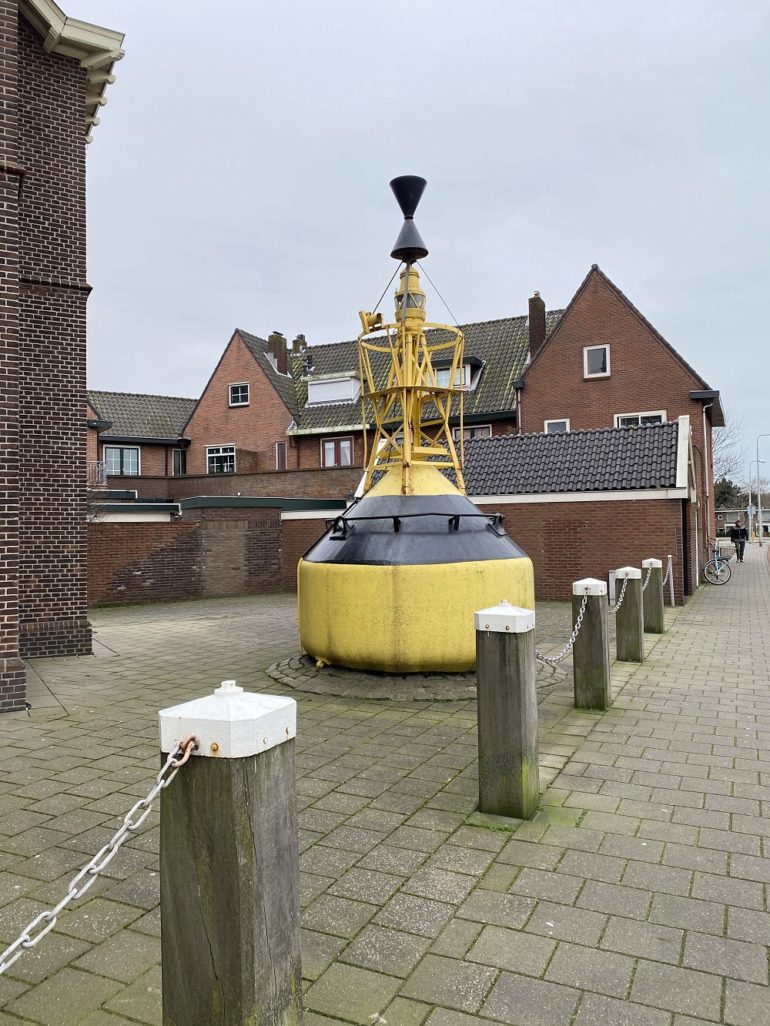 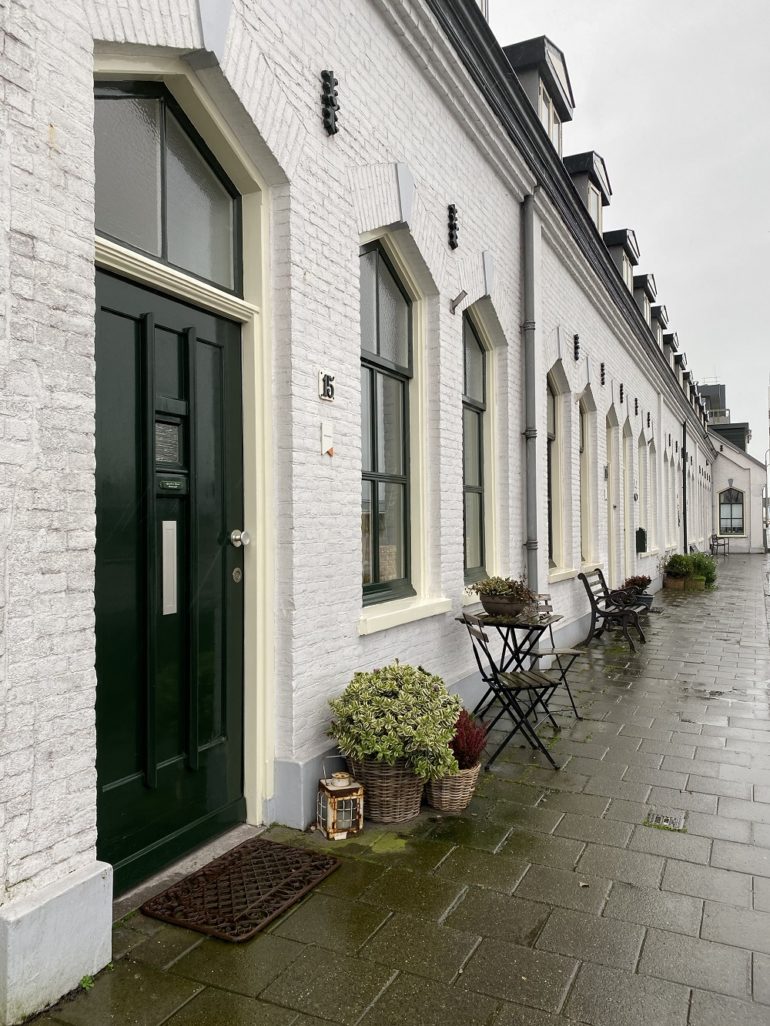 From the port of IJmuiden I walked to Zwaanstraat and caught the 285 bus to Haarlem. 30 minutes to the centre.

I laughed to myself – almost 24 hours of travelling by car, train, coach, ferry and bus, and I’d managed to arrive for my meeting 10 minutes early!

Haarlem’s famous Hotel Lion d’Or is the location for the launch of Postcards from Great Britain, the Shutter Hub mega project we’ve been working on for over a year now. I’ve stayed here before, and before. I almost stayed again, just for an afternoon nap!

Postcards from Great Britain is a whopper of a project – amongst many things it is an archive (to be housed in locations including Cambridge University Library and the V&A) and a series of exhibitions across Europe in all sorts of lovely places. You’ll like it. You should get involved, and you should come to the launch and stay in my favourite Haarlem hotel with me (here’s your invite!) 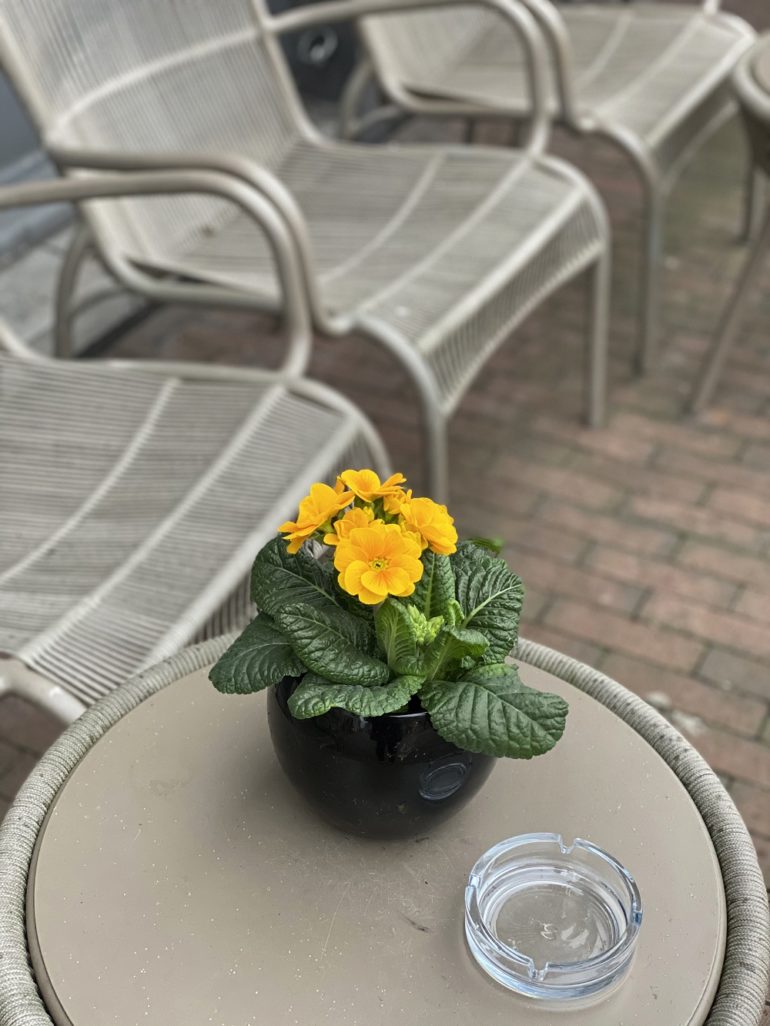 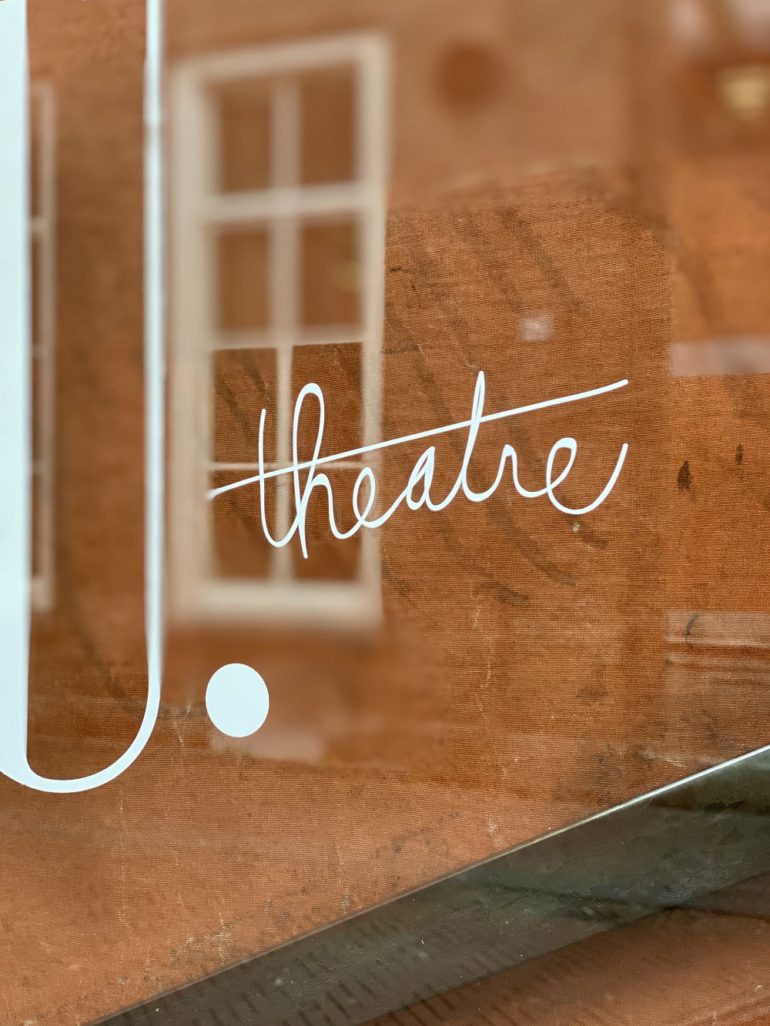 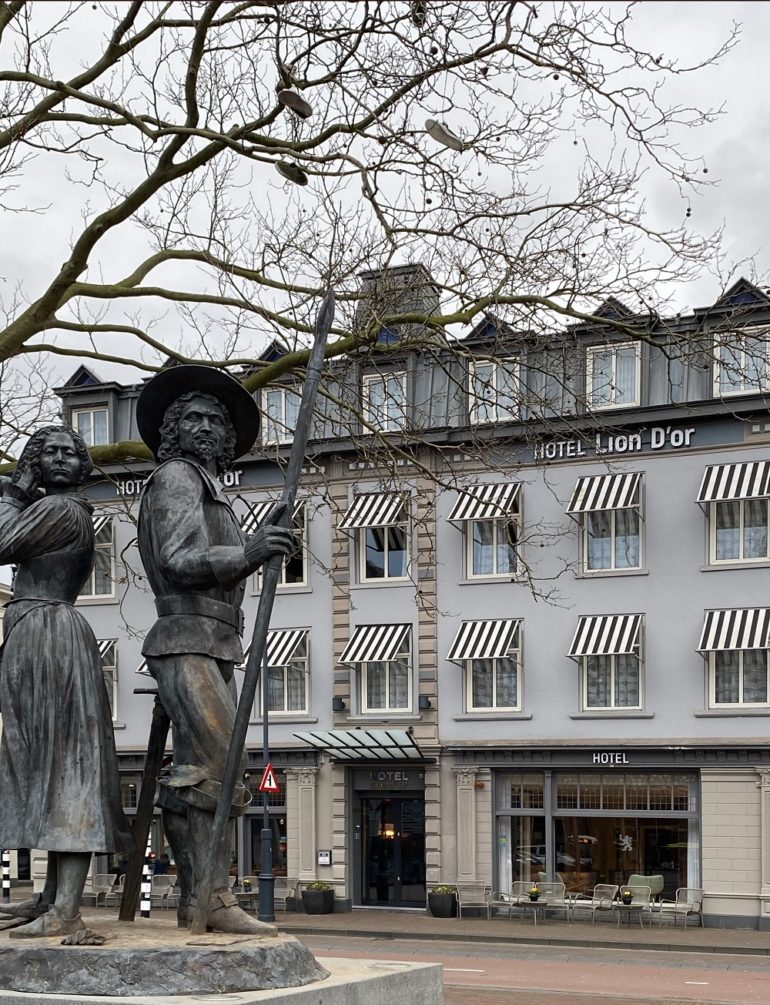 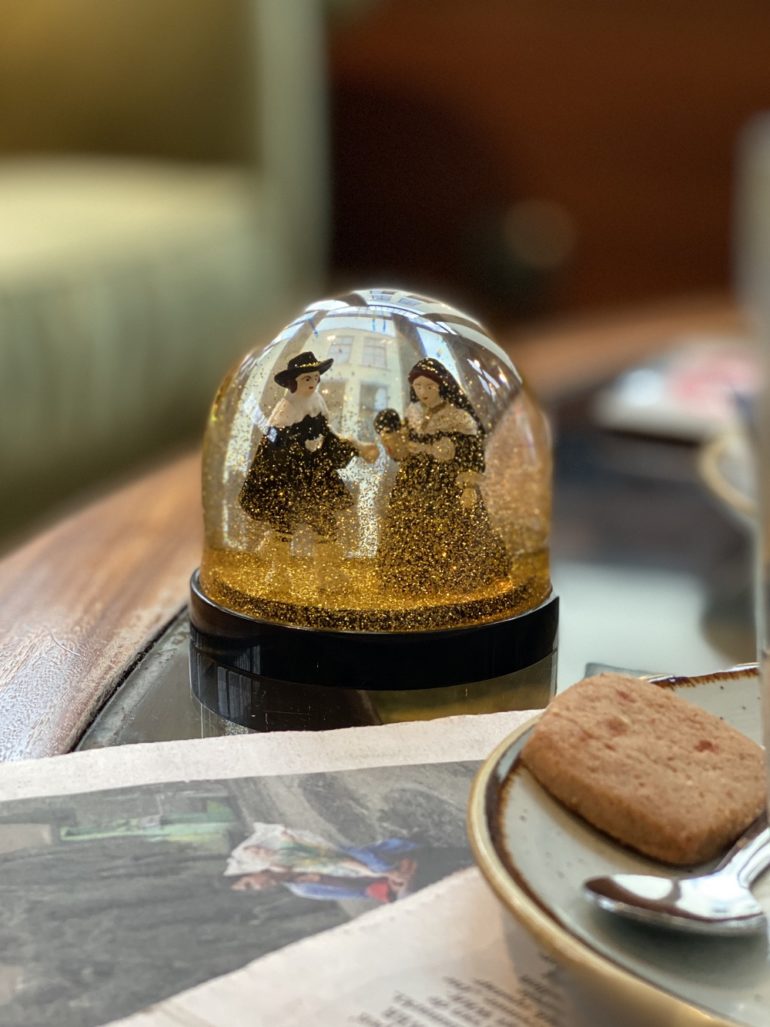 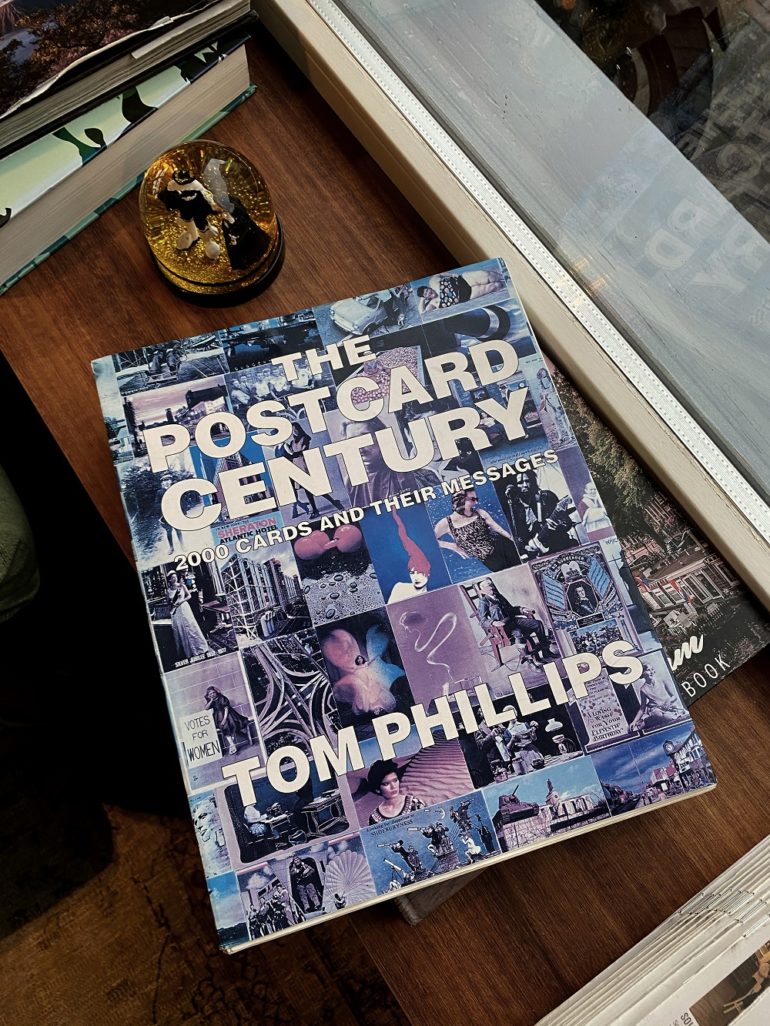 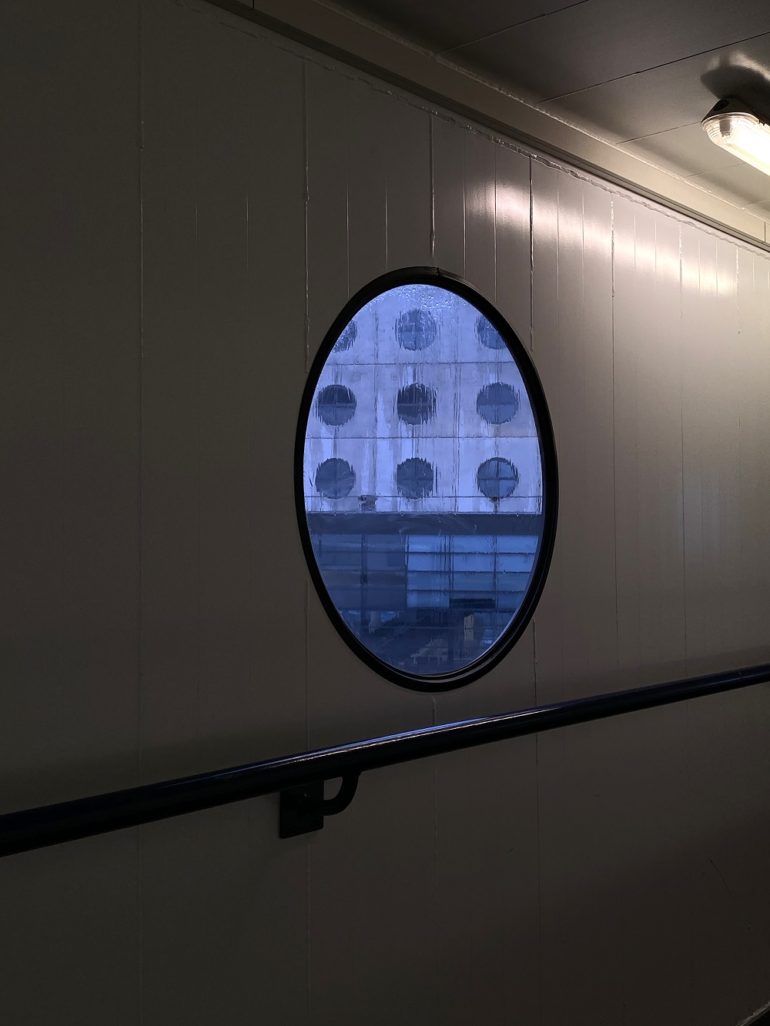 I wandered the streets for an hour or so, sleepy but pleased to be back in the friendly and familiar town. Then I got the bus back to IJmuiden, taking the scenic walk back to the ship. The crisp cool rain in my face was refreshing. Icy cold, but refreshing.

I can’t say I’d not thought about catching a flight home, because it had been a strong consideration. At 6am I would have been more than willing to abandon ship for a still and steady place to sleep, but I knew (and I’d been told) that the harsh conditions were a rare occurrence, and that the journey home would be fine. And it was, just that, fine and smooth. So smooth.

I slept well. Deep comfortable sleep. Still and silent. I woke, well rested, and went on deck to watch the sun rise over the sea. It was absolutely beautiful. Worth every bit of the journey.

Oh, and I saw a Chihuahua do a poo at passport control. That’s not something you see every day.

DFDS  currently offers two daily sailings between Newcastle and Amsterdam, as well as operating up to 54 sailings a day between Dover and France on its Dover-Dunkirk and Dover-Calais routes. In addition, the DFDS network includes a passenger and freight service between Newhaven to Dieppe, which has four daily sailings and is operated by Transmanche Ferries.

For further information about DFDS, or to find out about the latest sailing times, fares and offers across all routes from the UK, visit www.dfds.co.uk

With the greatest thanks to DFDS for making this trip possible. As always, my opinions are my own (and my ability to make friends at buffets, a skill I’d like to shake!)